Get over your case of the winter moops with a special seasonal deal. White Whale Bookstore teamed up with Trace Brewing and Two Frays Brewery for a discount temporary program aimed at supporting small, independent businesses in Bloomfield and Garfield. As announced in a Trace Instagram post, from now through April 1, you can pick up a free coupon with purchase and, each Saturday, redeem them at any three of the participating businesses. Coupons can be used for $1 off drinks at Trace or Two Frays. The coupons can also be used to take 10% off a book purchase at White Whale, or $1 off any draft beer in the bookstore's cafe area. Coupons will also be used to enter customers in a raffle for a special prize pack.

If you can't get enough of the flavors at Bae Bae's Kitchen, the Korean restaurant has you covered. You can now buy Bae Bae's sauces to use at home. Choose from Soy Garlic, Maple Gochujang, Wasabi Honey, Spicy Sesame, or Plum. 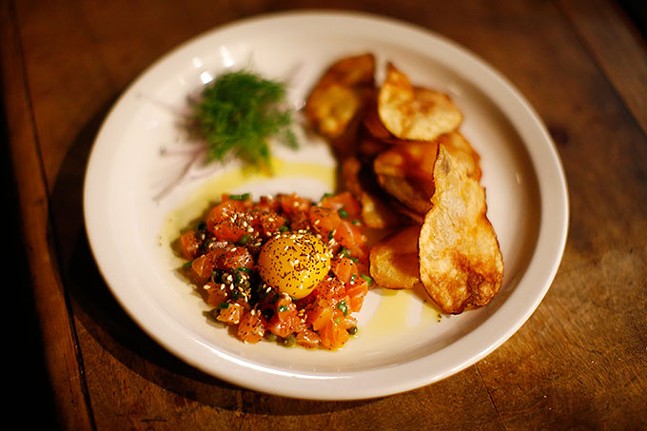 CP photo: Jared Wickerham
Salmon tartare is shown at a Fet-Fisk pop-up dinner at Pear and the Pickle in Troy Hill on Mon., Jan. 20, 2020

Fet-Fisk, a self-described "multi-faceted food project" that hosts pop-up dinners and more around the city, announced that it will move into a new space. Hal Klein of the Pittsburgh Post-Gazette reported that Fet-Fisk signed a lease to open a "full-service restaurant" in what was formerly Lombardozzi’s, an Italian spot that operated for nearly 50 years in Bloomfield before closing in 2021. The location will provide a permanent home for Fet-Fisk, a venture originally created by Sarah LaPonte and Nik Forsberg to bring “loosely Nordic” cuisine to various local restaurants and markets (Fet-Fisk is now run by Forsberg, Kate Romane, and Greg Austin). An opening date has yet to be set.