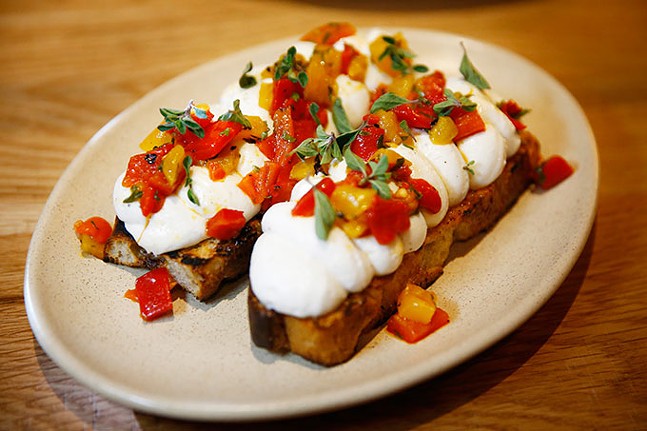 Alta Via was one of the most anticipated restaurant openings of 2019. It marked the first new concept from the big Burrito Restaurant Group — owners of Pennsylvania’s Mad Mex fleet, plus Eleven, Casbah, Kaya, Soba, and Umi — in 15 years.

The Fox Chapel eatery explored new territory for the prodigious restaurant group, one that Bill Fuller, big Burrito corporate chef and president, had been pushing for: Italian food. This isn't another iteration of Pittsburgh’s old-school, checkered tablecloth-covered eateries, but one that fuses Italian cuisine with the fresh, healthy-feeling food of California wine country. This idea steered them toward three ideas for the foundation of Alta Via's menu: fresh pasta, a wood-fired hearth, and vegetable-forward dishes.

The trio is prominent on the menu: Pastas are the obvious focus of the list, with an array of pasta shapes, sauces, and meats, and the vegetable section almost outnumbers the antipasti, many sporting a roast from the hearth.

Service — as expected from a group that runs 19 restaurants — is terrific. Dirty silverware and plates are removed from the table without sound or interruption, new courses and cocktails are paced out to keep the meal moving, but not so fast that diners are choking down dishes to keep from overlap.

But unlike the service, there was little memorable about my first round of dishes: burrata (with sundried tomato tapenade, basil, ciabatta crostini) and mushrooms (beech, hen of the woods, royal trumpet, smoked mozzarella, pine nut, crispy sage). Burrata was left flat without enough seasoning, the small dollop of pesto barely enough to flavor one bite. The mushrooms promised to give the course some excitement but were a big letdown. A bite without the sage or cheese left you with unpleasant, oily shrooms.

Tuna tartare and fried calamari followed, both undoubtedly better than their predecessors and good representations of Fuller’s fresh, lighter take on Italian food. The tartare wasn’t bogged down by sauce which let the fish shine. Crispy Meyer lemon brought life to the fried calamari.

I found the entree list uninteresting. The dishes, following the protein-and-vegetable formula, could likely be found on most Italian menus in the city. So I stuck with pasta for the main course, choosing the house special (a duck pasta) and gnocchi.

The special left much to be desired. Duck brought no flavor to the dish; accompanied by Brussels sprouts, an undetectable dusting of pecorino, and bland sauce, the dish was more or less lifeless. The gnocchi was too chewy for my taste but a step up from the off-menu feature. It was simple, paired with basil pesto, tomatoes, and house-made mozzarella. The pesto sauce was easily one of the most delicious things on the table.

A swirl of vanilla gelato and a tiramisu sundae finished off my meal. The house-made gelato, sprinkled with pistachios, was refreshing and well-executed. The sundae marked another blunder; the frozen ladyfingers were icy and unpleasant.

Based on the reputation of the big Burrito Restaurant Group, I expected more from Alta Via. On a few occasions, the restaurant came close to a “wow” moment but lacked the finesse to bring any new excitement to its take on Italian cuisine. I left wanting more. 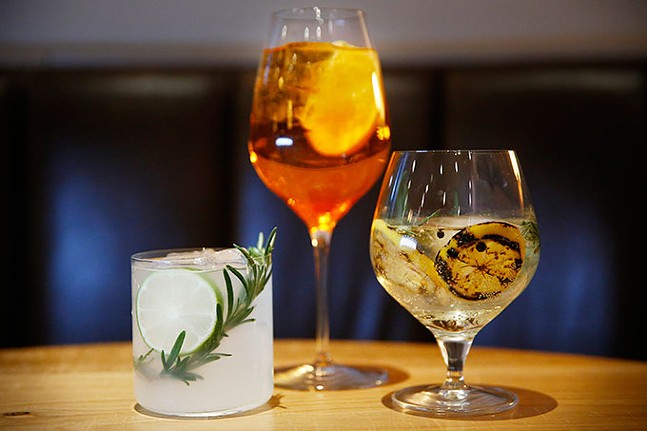 2. Cocktails
The wine list may be long, but don’t discount the restaurant’s cocktails. Try the rosemary gimlet.

3. Bar
While you’re drinking that gimlet, take note of Alta Via’s bar. It’s the perfect place to sit for a pre-dinner drink.