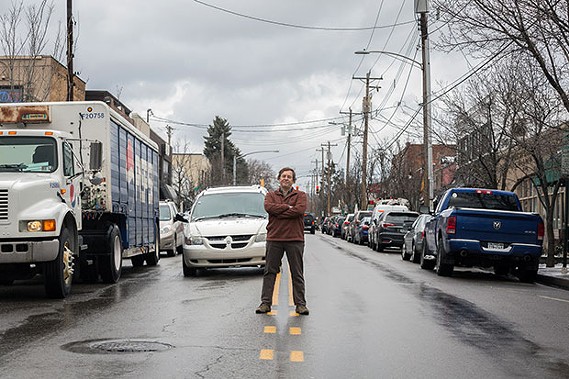 At 6:33 p.m. on Jan. 17, Davor Wagner was struck by two vehicles at the intersection of South Braddock Avenue and Sanders Street, in Regent Square. The man was hit by one vehicle, and the force propelled him into the path of another vehicle, where he became pinned under a tire.

Two weeks after the Jan. 17 accident, Wagner was out of the hospital and recovering at home. (He communicated with City Paper by email but declined to comment for this story.)

“It’s been a problem for many years,” says Paul Heckbert, who lives eight blocks from the intersection. “I’ve heard reports of car crashes and car-pedestrian accidents for years.”

Regent Square includes portions of the city of Pittsburgh and the boroughs of Edgewood, Swissvale and Wilkinsburg; responsibility for the Sanders Street intersection is shared by Edgewood and Swissvale. Various intersections along South Braddock Avenue have been under a microscope in years past, with municipal officials and traffic experts working together to find solutions to make the roadway safer for pedestrians. Now, concerned residents say it’s time to focus on the intersection at South Braddock and Sanders.

A number of residents have called for a crosswalk there, which they believe will force drivers to slow down. It’s situated in a popular area of Regent Square’s business district — right near D’s Six Pax & Dogz — where pedestrian traffic has been increasing.

“There needs to be something to let people know that pedestrians are crossing, and they have the right of way when they’re crossing,” says Powell, whose chiropractor office is located on South Braddock near Sanders.

But a crosswalk might not be the solution many hope. Wei, the pedestrian killed in 2004 while crossing South Braddock Avenue, was in a crosswalk when she was hit.

Officials from Edgewood and Swissvale are looking at several options. They acknowledge something must be done to make the intersection safer; a new traffic study is currently being conducted.

“It’s definitely a high priority. People are becoming more aware of the importance of pedestrian safety. We have more people walking and biking,” says Mark Magliotti, co-director of University of Pittsburgh’s Center for Sustainable Transportation Infrastructure. “So I really believe Edgewood and Swissvale are doing the right thing to try to improve pedestrian safety, but it does take some time and some funding to implement. But it’s important.”

Safety concerns along South Braddock Avenue have persisted for years. The road leads to Edgewood Towne Centre and connects nearby to the Parkway East, and residents say drivers there tend to travel at high speeds.

“Braddock Avenue itself is a problem. Braddock gets a lot of heavy traffic,” Heckbert says. “It’s a high flow of cars, and fast-moving cars going right through a business district.”

Crosswalk supporters oppose current plans to add signs telling pedestrians not to cross at the intersection.

Heckbert is a member of the committee on traffic and safety of the Regent Square Civic Association. He emphasizes that the organization has not endorsed placing a crosswalk at the Sanders Street intersection; rather, he has been advocating for the safety measure on his own. After the story went to press, Ken Kuligowski, President of Regent Square Civic Association, reached out to City Paper to clarify the group’s position. Kuligowski said, “the RSCA endorses the ability for pedestrians to cross safely at the Sanders/Braddock intersection, but defers to the upcoming Traffic Study as the basis to develop an acceptable solution in conjunction with the neighborhood and the Boroughs.“

His petition for the crosswalk has received 1,026 signatures. Many have been sharing stories of nearly being hit at the intersection.

“Hearing all these stories convinced me that there’s a serious issue here,” says Heckbert. “If we can get the cars down to the speed limit of 25 mph, that would help.”

“If the boroughs wanted to do something inexpensive that they could pay for themselves, they have the authority to put in the crosswalk themselves,” says Heckbert. “But if they use state money or federal money, the boroughs are required to get [Pennsylvania Department of Transportation] approval. PennDOT requires a traffic study.”

Right now, the boroughs plan to install signs prohibiting the crossing of South Braddock Avenue at Sanders Street. But Heckbert says that since foot traffic to nearby businesses has increased, many pedestrians might not want to walk an extra block to cross at an intersection with a crosswalk or stop signal.

“That seemed just impractical to us. Even if you put up such a sign, many people would ignore it and cross the street anyway,” says Heckbert. “We need cars to slow down, so when a pedestrian does want to cross, they can do that without fearing for their life.”

“I sit here and see people driving like idiots,” Powell says. “Drivers don’t slow down. They don’t stop to let pedestrians go. There’s a lot of distracted driving going on. I can see out the window and see people on their cellphones, texting while they’re driving.”

In 2014, Edgewood and Swissvale boroughs were part of a road-safety audit that was conducted by the Southwestern Pennsylvania Commission. It looked at South Braddock Avenue in its entirety from the portion in the City of Pittsburgh to the Kenmawr Bridge.

According to Julie Bastianini, borough manager of Edgewood, “that road-safety audit suggested some improvements that could be made to the corridor.” Then in 2015, when the SPC had funding for pedestrian and bicycling improvements, the two boroughs decided to  jointly apply for a grant to carry out some of the audit’s recommendations. They were ultimately awarded $479,000.

But other than installing curb cuts compliant with the Americans With Disabilities Act at South Braddock and Sanders, the intersection would not see safety improvements from the grant.

“That intersection was looked at as part of the road-safety audit, and it was looked at in previous traffic studies as well,” says Bastianini. “The grant proposal was to update existing crosswalks.”

But thanks to the petition started by Heckbert, borough officials have since solicited a traffic study to look specifically at the feasibility of a crosswalk. The data collection for that study has been completed and is being analyzed by a consultant. A completed report is expected by the end of February.

“Our previous reports have shown us that is not a safe place to cross South Braddock Avenue. There is a safe signal cross one block away at West Hutchinson Avenue, and we encourage everyone to cross at that intersection,” says Bastianini. “However, some time had passed since we’d done a traffic study that looked at that intersection in particular. So council decided it was time to see if anything had changed at that particular intersection. I think they heard the request of the residents.”

While Bastianini admits it’s important to address safety concerns at that intersection, she says she’s not confident a crosswalk is the solution.

“We look to PennDOT standards for crosswalks. We don’t want to encourage people to cross somewhere where there might not be driver visibility to see them at a crosswalk. If we are encouraging you to cross somewhere, we want to make sure it is a safe place to cross,” Bastianini says. “In the past, it’s been about visibility and height distance. There is a hill there, so the concerns have been even if you paint the street, a driver cannot see a pedestrian crossing. We rely on the experts, so that’s why we have hired traffic engineers to look and see are there are ways we can optimize safety at that intersection.”

But Mark Magliotti, of The Center for Sustainable Transportation Infrastructure, says a crosswalk there makes sense.

“I don’t see why you wouldn’t put a crosswalk there. It’s an intersection,” Magliotti says. “Pedestrians have to cross and there’s no traffic signal. A crosswalk always provides some additional measure of safety for pedestrians, because it’s there mainly for the visibility of the driver so they know that’s a place where pedestrians are going to cross.”

In addition to a crosswalk, Magliotti says there are other kinds of pedestrian warning devices that can be installed to improve pedestrian safety and alert drivers that pedestrians are crossing.

“It all depends on the community, what they can afford or what funding sources they have for something like that,” Magliotti says. “The two communities, Edgewood and Swissvale, would have to share the cost of what something like that would be.”

But increasing safety can also be a simple matter of reminding drivers of the rules of the road.

“Obviously, when you have a traffic signal, that’s probably the safest situation because the traffic has to stop, and they have crossing indications and things like that,” Magliotti says. “But pedestrians always do have the right away whether there’s a traffic signal there or not.”

Editor's note: This story was changed to clarify the position of the Regent Square Civic Association.

Hazelwood residents march for better pedestrian access out of their neighborhood