A crowded stage is nothing new for Broken Social Scene

“I don’t know how many people will be onstage when we get to Pittsburgh.” 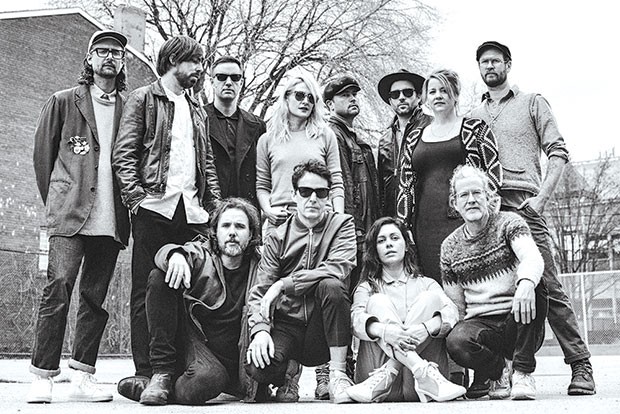 The members of Broken Social Scene have a running joke inspired by the group’s massive lineup: Those on stage left never have any idea what’s happening on stage right. Considering the Toronto band might have more than a dozen musicians onstage at one time, it’s not surprising.

Charles Spearin, who plays guitar and bass with the group, says the joke is partially true. “A lot of the times I don’t even know the chord progression of the song, but I’ll have my parts [from a recording],” he says. “We’ll find out later that everybody’s playing different chord progressions. But they can be made into — I don’t know — slightly more colorful chords.”

“Colorful” certainly describes Hug of Thunder, the band’s fifth album. The songs reveal a writing style rooted in classic pop, with layers of vocals, instruments that drop in and out at any given time, and lyrics that frequently verge on the oblique. If band members aren’t following the same chord pattern, the outcome still sounds more panoramic than chaotic. The vocals on “Halfway Home” swell like a choir, and the whole group sounds orchestral during the closing “Mouth Guards of the Apocalypse.”

Spearin describes Broken Social Scene, which came together in 1999, as a cooperative. “Honestly, most of the people in the band are longtime friends,” he says. The 18 musicians credited on Hug of Thunder include vocalists Leslie Feist, known for her solo act under her surname, and Emily Haines, of the band Metric. “Everybody branched off and did their own thing, but still managed to keep in touch. We always open the door for each other and say, ‘Hey, we’re making a record. If you want to come and be on it, we’d be more than happy to have you,’” Spearin says.

Guitarist Kevin Drew and multi-instrumentalist Brendan Canning handle most of the lead singing, but the group isn’t simply their vision, fleshed out by their friends. Songwriting credits are absent from all of the band’s albums because many people lend hands in the recording studio. “We half-write the song knowing that somebody else is going to come in and help with it,” Spearin says. “You sort of have a mysterious [aspect] — a new melody is going to be [added] in, a new sound, a new instrument.”

All the input, however, can complicate the mixing process. “The last part of a Broken Social Scene record is the hardest, when everybody has their different opinions and ideas,” Spearin says. “It’s great because everybody’s passionate, but at the same time it’s almost political. ‘OK, you can turn up the snare drum the way you want it in that song, if you have this guitar part in the other song.’ It gets pretty bizarre.”

On this tour, the size of the band has varied, depending on the night. “We’re always looking around for horn players to jump up and join us for a show or two. So, I don’t know how many people will be onstage when we get to Pittsburgh,” Spearin says, adding, “at least eight.”