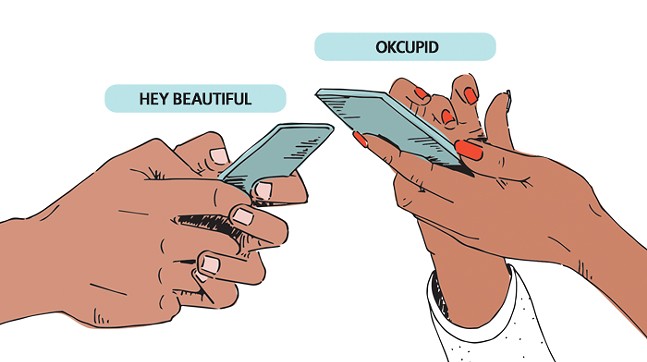 CP Illustration: Abbie Adams
There was something about the way Ira Madison III said, “OkCupid.” The Keep It podcast host compelled me to stop and listen to the entire ad, even though I usually hit that 30 sec fast forward button on my phone.

Mr. Madison reminded me of Debbie Allen on the TV show Fame, acknowledging a dancer coming to the stage. “OkCupid” [show me what you got: cajoling but expectant, maybe even … hopeful.]

OkCupid. There is a pandemic, so what else are you going to do?! OkCupid. People are home anyway, and even more are online than before. OkCupid. Send us an invitation to the wedding when you meet that perfect someone. Versions of these statements were all on the podcast.

I’ve been firmly on the “Yinz will not see me” team since March, so there was something about starting a relationship online — spending time and getting to know a man primarily through his words and his voice — that was appealing to this reluctant-to-admit-it romantic. As someone who uses skepticism as a form of protection, the idea of beginning a romance virtually felt like a 21st century version of seeing someone from afar, writing them a flowery missive then “helplessly hoping ...” My hardened heart was ready to try.

And with hope, I went back to the internet dating game. This is no small thing. I have done this once before in Pittsburgh. It is, well, a sea of men who, to me, look very similar to one another, wearing a black ’n gold jersey of some kind, photo taken in their vehicle from a low angle so the first thing you see is neck, chin, and the inside of nostrils. Or a photo of them shirtless. Or a photo of them straddling a motorcycle, shirtless.

There’s also the issue of navigating dating apps as a Black woman. The Black Lives Matter movement has impacted some dating apps, which resulted in some removing racial filters because RSD, or Racial Sexual Discrimination, is rampant. Cornell University and Johns Hopkins recently cited issues of “Whites Only” preferences that would make “Segregating Now, Segregation Forever” George Wallace blush. And in 2018, National Public Radio reported that Asian men and African-American women are the least selected profiles on dating apps.

I created my OkCupid profile, and I noticed the men who seemed most interested in talking to a woman who mentioned where she had lived, languages attempted to speak, subtitled-films watched, a love of hiking and camping, and books read ... were men from other parts of the world. COVID-19 had made geographic barriers irrelevant; we're all just virtual dating.

In the midst of my once every 10-day grocery shopping and morning walks in the early “Red” days of isolation, there was joy in seeing if someone I expressed interest in had replied back. Or, if someone I had connected with was still interested after a couple of weeks; or conversely, if I was happy or disappointed to see a reply. How to end a connection? Silence or with a well-crafted DM.

Hopeful spring became a hot summer, and the cooling autumn finds me no longer on OkCupid.

In late March, I met a man who lives several thousands of miles away.

He had a simple and not very impressive opening salvo, but it was the kindness of his profile that attracted me. We messaged awhile and moved it to our personal phones, until we did not. I went so far as to delete our initial conversations both on OkCupid and on my phone. Nothing horrible happened, we just stopped communicating.

Then a couple weeks went by, he said, “Hello,” and I did not.

Another month went by, he said “Hello” again, and this time, I said it back. I asked him why he reached out again after I ignored him, he said, “Something compelled me to try again.”

Since then, we have talked, texted, video called, sent audio messages every day. We watch movies and tennis together, and even did a virtual Carnegie Science Center visit. It is terribly romantic and corny. It is a mystery and all so simple. I feel like I have met him before, have known him for years, we text the same thing at the same time, and laugh. Then there are the million things I am learning about him and me, every day. It is all so new.

I wake up in the morning and immediately check to see if he has sent me a morning greeting; he has. We still haven’t been in the same physical space at the same time, yet. But I know we will, soon. He teases me about being so American and saying “OK” all of the time, like in the movies. Sometimes he calls me Tereneh “OK” Idia. It makes me smile just to type all of this.

To me, all of this is wonderful. Yes, it is OK with me. Very OK.