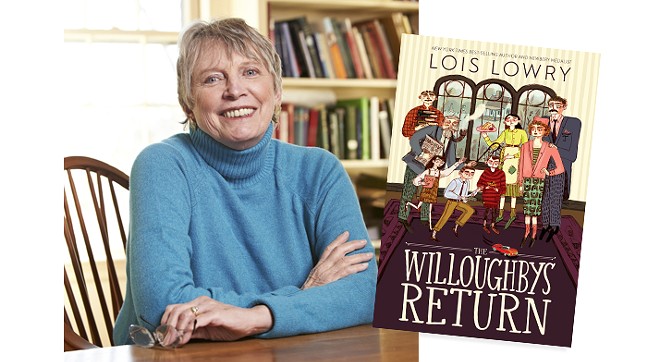 Photo: Matt McKee
Lois Lowry
Lois Lowry was eight when she picked up Marjorie Kinnan Rawlings’ The Yearling. It was the first book for adults she read, and one that still impacts her 75 years later. Stories, according to Lowry, “are a way of rehearsing one’s life,” and The Yearling was the foundation of that philosophy.

“It presented me with things I would encounter later in my own life,” says Lowry, “and gave me a way of reacting to them in the safety and comfort of my own home. And I think the things I write, that’s what they do for kids.”

Lowry will appear virtually on Sun., Oct. 18 as a guest of Pittsburgh Arts & Lectures’ New and Noted series.

Twice awarded Newberry Medals — for Number the Stars in 1990 and The Giver in 1994 — Lowry started as a freelance journalist and photographer. From stories for the New York Times’ Sunday travel section to feature articles in Down East magazine, a publication that covers all things in Maine. Lowry “did a little bit of everything,” she says.

Writing for magazines taught Lowry about the power of observation, a skill she put to use in fiction. “It’s the noticing of details,” she says. “You can tell now that my college degree was in English and literature. And it was Henry James who said, ‘a writer is someone on who nothing is lost.’ … It’s the ability to notice everything, and not that I learned to do it, but I mastered it, I think, when I was doing magazine stuff. And I think I still try to use that facility now.”

Photography also became a useful tool when Lowry turned to fiction. She recalls not only working in a darkroom — “photography was quite different then” — but also learning “how far to open up the lens, what to focus on, what to blur, how to compose a scene,” she says. “All of that carries over into the writing of fiction.”

Lowry published her first novel for young adults, A Summer to Die, in 1977. Her latest release is The Willoughbys Return, a sequel to The Willoughbys (2008). But The Giver (1993) — part of a quartet of books that includes Gathering Blue (2000), Messenger (2004), and Son (2012) — is arguably her best-known work, and most controversial. The Giver has made banned book lists.

Lowry says challenges to The Giver were surprising to her “because they took things out of context. One of the things that was often mentioned as a reason for challenging, or banning, The Giver was that the book recommended euthanasia, which was not the case.”

Lowry has had much better experiences with film versions of her work. Netflix recently released an animated version of The Willoughbys starring Ricky Gervais, Maya Rudolph, Terry Crews, and Martin Short. And The Giver, released in 2014 and featuring Meryl Streep and Jeff Bridges, was a wonderful experience.

“Jeff Bridges was very involved in the making of that film and he was very inclusive of me,” Lowry says. “Often that’s not true — the writer gets set aside and the movie is much different than the book and the writer has to accept them. But Bridges was terrific. They brought me over to South Africa where they were filming so I could watch, and he even asked me if I would like to have a small part in the movie. But I declined.”