“We wanted to take stuff that was sitting around and look at it through a different lens and see what happened.” 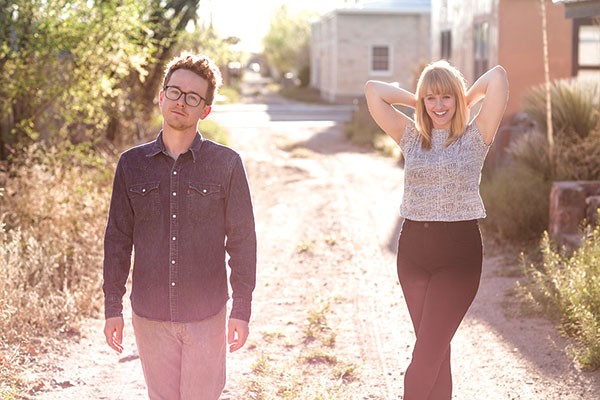 Wye Oak wants to manage your expectations. Jenn Wasner and Andy Stack have maintained that their latest release, Tween, isn’t the band’s fifth full-length, despite its eight tracks and 35-minute run-time matching what many bands present as a proper LP these days. They’ve instead opted to call it a “mini album” or “new not-album,” even though it contains some of the band’s most expansive and accomplished songs to date.

The duo’s last proper full-length, 2014’s Shriek, was notable for a few reasons. Wasner and Stack traded the elemental, rustic feel of their 2011 breakout, Civilian, for songs they could email back and forth across the country. Gone were the guitars; in were the bass and synthesizers. Tween contains tracks that were culled from the years between Civilian and Shriek, but didn’t seem to fit on either album.

Aside from making Wasner’s guitar great again, little about Tween sounds like either of those records. The group traverses skyscraping dream-pop on “If You Should See,” and “Better (For Esther)” contains some of the most triumphant left-turns and misdirection I’ve heard on a record this year. During a phone call with Stack, he tells me that the band feels as much freedom as it’s ever had to tweak its existing playbook into new and compelling songs.

“We have all these different colors on the palette right now, and we can pick and choose depending on what seems to suit the ideas that we’re having,” Stack says.

Surprise releases, at least recently, have seemed like a way for high-profile artists to control the conversation for a couple of days or a week. Since Wye Oak obviously exists in a different space than, say, Chance the Rapper or Beyoncé, what made you want to surprise release Tween?

It’s interesting that you say “control the conversation,” because even with our diminished stature compared to some of the other people who are doing surprise releases, I think it was also for us a means of control. The goal was that we didn’t want to approach this release as we would a full-length record; certainly as we’ve done those in the past, where it’s like you make some announcement far out, and then you’re basically working this hype machine and get a lot of expectation built up around the release. For us, that didn’t feel like a good idea with this collection of songs. Because it’s not exactly a traditional full-length for us, and it’s more just a way for us to sort of examine process. We wanted to take stuff that was sitting around and look at it through a different lens and see what happened. … [W]e knew that we had a base of people who would be excited to hear it, but it didn’t require a crazy amount of forethought and marketing.

The title Tween represents a brief transitional period in our lives, and this record does really feel like that.

We approached it separately from a record — where if you want to use that tween analogy — you think of the record as an album, capital A, as the fully formed adult or something like that. The tween, or in-between state, you’re kind of in a position where you’re playing with a lot of different ideas and you’re not totally committing to who you are yet. For us, it was a really fun part of the process, to be able to hop around and not worry too much about having some fully formed cohesive statement. It was more about having a chance to play with different sides of our creative selves.

It’s coming after Shriek, which by all accounts seemed like a product of isolation and separation for you both [Stack currently lives in Texas, Wasner in North Carolina]. Do you want to keep recording future albums in that method, by bouncing ideas long-distance, or do you prefer to be in the same room?

It’s worked really well for us that way. And I think ultimately [it ends up being] a combination of those two tactics. It’s not computer-based music, so it’s not so simple as sending files back and forth. Even with Shriek, which was experimenting with technology a little bit more than we had in the past … there’s still an organic quality to it, and there’s still a feeling of two people together in a space that we try to get with this music. So I think it creates a fun challenge to write remotely, but we usually enjoyed it. Furthermore, it’s just where our lives have gone at this point. It’s really important for us both to have our lives and pursue things that we want to do, so we let our collaboration sort of bend to that.