Soorma has helped shape the brewery and taproom into something wholly unique in the city, and the region

CP Photo: Jared Wickerham
Trace Brewing’s Aadam Soorma
The craft beer scene in Pittsburgh is exploding, but not for everybody. Despite many rallying cries, the space is still a predominantly white-male driven industry. Bloomfield’s Trace Brewing is looking to change that, and a lot of it starts with its Director of Marketing and Guest Experience, Aadam Soorma. A staple in the Pittsburgh beer scene, Soorma has helped shape Trace, which first opened in mid-2020 as a take-out spot, into something wholly unique in the city, and the region, once it opened for dine-in services. Pittsburgh City Paper sat down to talk with Soorma about brewery marketing, inclusion, and the future of the scene.

This interview has been edited for length and clarity.

What made you first get into craft beer?

In Pittsburgh, you’d have to fast forward all the way to 2016-2017. I started as a tour guide with Porter, which was a little craft beer tour company with a bus. So we got our commercial driver’s licenses, we drove the bus, we did the beer tour from 2016 all the way until COVID. I was also a beer columnist at Very Local, so I wrote about beer, which was cool because I got to cover the industry as a writer. And then I quit that job in January of 2021 to help open Trace.

Where did the Guest Experience element come from before you came to Trace?

That was mainly my intuition. When I started, the way my job worked was I was two-thirds marketing, one-third bartending, so I thought of it like sitting at the intersection of both. … I want to have enough know-how in the front of house to know, “Who are the guests? What are the events, the DJs, the food trucks?” So the Guest Experience stuff is mostly hitting us up on social media with an inquiry or a question, most of that stuff goes through me. And then, all the programming in the space. I don’t do any brewing and I don’t do any coffee, so the Guest Experience stuff, in my eyes, is an extension of the front of house.

What separated Trace in its first year of dine-in service was being a different taproom experience than a lot of what’s in Pittsburgh. Was that always Trace’s plan?

It was kind of two things. One part of it was our location. Because we’re in Bloomfield, there was no other brewery right here in the neighborhood. So we thought of it, like, Bloomfield is right in the dead-ass center of the city, and we’re near some of the Black community in the Hill, and some of the gay community that exists all across Pittsburgh, so the programming and approach to opening the taproom to more communities was partly driven by our location and partly driven by our staff.

Katie, our general manager, came from Spirit, and no one in our front of house came from craft breweries. So when we heard them talk about these things that could bring different people in, we realized we’re a brewery that loves our product, but we’re also very space and experience forward, and that had a lot of impact on how we do service.

Have you had beer-centric folks tell you they’re surprised at the brewery’s offerings, or seen people coming in for events surprised to enjoy craft beer?

Definitely. On the former side, for the folks who see Trace as a brewery forward-concept experience, things like having to use the restroom and having it all be gender-neutral, some of them haven’t experienced that because they’ve gone to conventional breweries where it’s very gender-delineated. And they come for the beer and end up staying for the vibe, and it's awesome. It’s been funny to watch. We’ll have an event like Drag Brunch, and they’ll ask, “Oh, are we allowed to be here?” And I’m like, “Absolutely, we’re for everybody.”

On the flipside, we’ve seen some of the folks come in specifically for an event, end up getting some beers, and enjoying it. And if that’s their first touch point for the craft beer scene, our hope is they explore other breweries, too. And it’s been cool because we’ll have folks say, “I don’t really like IPAs,” and we can say, “That’s OK, try a saison, try a lager, try a stout.” 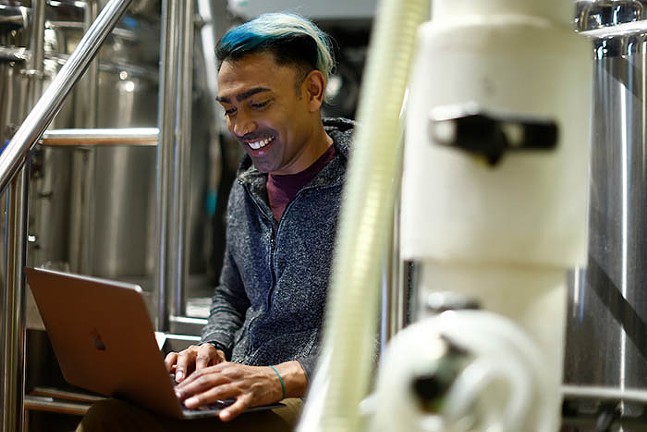 You’re obviously kind of a rarity in the “non-bearded white dude” space in the beer scene. Have you seen it change since you started?

Yeah, I don’t know if we’re the frontier, but it’s been funny having folks who cover beer come here and see a different type of clientele, or a night where the whole front of house is people of color or all women, and that doesn’t always happen. And that’s been cool to see it proliferate out. One of the leading voices for the beer community is Day Bracey, who’s been very forward about beer being great, but elevating the Black community. So he’s come to Trace and gives us feedback, and that's been really cool to see because he’ll take meetings with other people of color, and he’ll choose to take them at Trace, and that’s awesome because I know he feels comfortable here.

On the guest side, for sure, it’s been really cool to host things like [the dance party] Slappers N Bangers. And the artists we hire for Live Art Night are usually artists of color because we’re working with BOOM Concepts and Redfishbowl to help curate that program, and work with artists of color.

What has to happen to get those people who do want to make it a more inclusive space to take that next step?

I’d say it's two things. First, if you’re in ownership or leadership and you’re looking to staff up, chances are you’ll hire who you know. And that’s totally normal, to some degree that’s how we’ve built Trace. But it just takes a little bit of effort. When I book vendors, when I book food trucks, the staff has been really helpful to tell me, “Hey, you’re doing a good job, but you need to do a better job reaching out to this Black vendor, this person of color who’s an artist.”

If you take one extra bit of effort or initiative, it takes time and credibility because it feels a little weird if suddenly a very white brewery all of the sudden does all of these Black events. But if they’re doing the outreach and you’re building that relationship for a sustainable cause, that’s where it just takes effort.Trace Brewing. 4312 Main St., Bloomfield. tracebloomfield.com

On the Tahn: Dance parties at The Goldmark, Bakery Square, and more (Aug. 25-28)