A Conversation with St. Vincent

Marry Me, St. Vincent's 2007 debut, offers a complex, orchestrated play across genre, from playful ballads to waltzing gothy gloom. While the album suggested a certain restraint, the sparks flew at her live shows -- including her performance at The Andy Warhol Museum -- with ever-shifting instrumentation supporting her arch vocals and ferocious guitar work. It seemed like she burst onto the scene fully formed, but St. Vincent, a.k.a. Annie Clark, had spent years developing her chops, including stints in The Polyphonic Spree and Sufjan Stevens' band.

Her latest album, 2009's Actor, takes her sophisticated indie pop in a direction similar to the weird ambition of, say, Björk or Lodger-era Bowie -- gorgeous, unsettling, smart and terrifying at the same time. What else are you supposed to call sweet melodies with titles like "Laughing With a Mouth of Blood"?

Having seen how much detail goes into your live show, it's startling to see an old video of you playing these songs solo with just a guitar.
With what I do, if I can't boil it down and do a solo version of it -- boil it down to just its basic elements, which is some sort of harmonic accompaniment, and a voice and words -- then maybe it's not such a great song.

Your shows with a full band seem like a technical feat. How much has to be pre-programmed and triggered, how much can be spontaneous?
There are samplers and there are some things pre-recorded going, but we do spend a lot of time in rehearsal really reinventing a song for live. Going "OK, with this instrumentation -- woodwind, violin, guitar, bass, drums, et cetera -- how is this song going to be best translated?" The guys I play with in the band are all multi-instrumentalists and really talented, so it becomes actually pretty easy to do these big fleshed-out arrangements that sound like more than five people, just because of the versatility of the players.

I do spend time programming samplers and buying that keyboard unit that has that good mellotron sound. And I have so many [effects] pedals -- dresser-drawers full and full of pedals. I do spend a lot of time thinking about sonically, how it's gonna come across, and how it should come across.

Overall, Actor gives the impression of being more rhythmic, more forceful than Marry Me.
Musically speaking, I was going for something that felt cinematic and felt like Technicolor and whimsy and magic. But yeah, after going out and playing the Marry Me record for a year and a half, two years, you always know in the set that it's more fun to play "Your Lips Are Red" than it is to play a ballad. So I kept that in mind while I was writing this record. I really wanted to have a fat low end and a groove to it, to kind of keep it all moving forward. The result was a lot of ornate musical things happening over really simple, repetitive drum beats ... it was just my spoonful of sugar.

Did you art-direct the music videos for "Marrow" and "Actor Out of Work" to some extent?
I do pick the treatment, but I don't come up with the treatments. They were made by a directing duo called Terry Timely. When I saw the "Actor Out of Work" one with the actors crying and everything, at first I thought, "Oh no, this is horrible," like "I want my image to be a little bit warmer, and this is going in the opposite direction." But when it's all said and done, I think it's a really cool, really jarring concept.

It's a little difficult to watch! You don't see adults cry that much or break down that way.
Yeah!

What's next for you?
I'm going to China and Singapore, just touring a little bit more. And then working on another record and working on collaborations -- a bunch of stuff actually, which I don't think I can even mention, but it's going to be awesome.

As far as backing other musicians -- like you did in Polyphonic Spree and Sufjan Stevens' band -- is that still part of your makeup, how you think of yourself as a musician?
It was really exciting and fun to get to be a part of Sufjan's band. If it worked out again, scheduling-wise, to do it, that's awesome, that would be great. And same with any other projects -- if it works out timing-wise, and it's also creatively inspiring, sure. At this point, I'm busy with my own work and couldn't necessarily quit it to be a sideman. 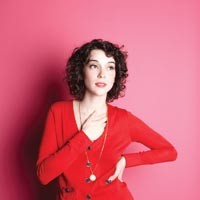 Laughing with a mouth of blood: St. Vincent