"We're living in a time where everyone's got the attention span of a mongoose on meth." 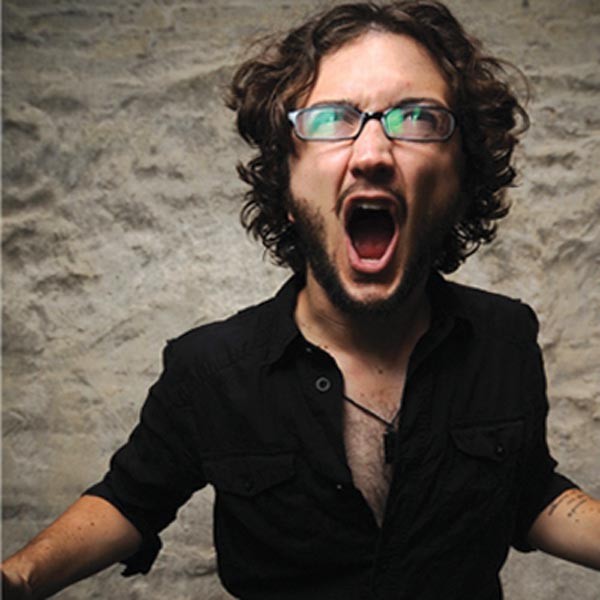 Camp contributes to The Onion and has been featured on Comedy Central's Fresh Debate, Countdown with Keith Olbermann, BBC's Newsnight and SpikeTV. Website www.leecamp.net features twice-weekly Moment of Clarity rants, and interviews with guests like The Yes Men, writer Chris Hedges and investigative journalist Greg Palast. (Camp also wrote a political-humor book titled Moment of Clarity.) In 2008, as a guest comedian on Fox News, Camp suddenly asked on-air, "What is Fox News? It's just a parade of propaganda, isn't it? It's just a festival of ignorance."

He has one tattoo, on his forearm. It's a quote by the late activist and author Howard Zinn: "Small acts when multiplied by millions of people can become a power no government can suppress, a power that can change the world."

Camp is also not afraid to get philosophical. In a recent Moment of Clarity, he mused about starting a business called Shit Your Pants Incorporated, to create near-death experiences to force clients to ask what really matters in life.

Hear comedian Lee Camp talk about the books and magazines that influenced his political outlook.

Has your act always been part philosophical?

When I started doing comedy, I started very observational, talking about the mundane stuff of life, but making it funny. Then I kind of moved on to wanting to talk about deeper issues. I'd rather make 90 percent of the audience hear something they haven't heard before, and 10 percent not like it, than make 100 percent laugh and they never remember me because I'm like every other comedian.

Why did it change?

It consisted in me becoming more aware politically, with kind of just this growing unease I had with performing every night, and not saying anything of substance.

Most comics are more ingratiating. Why do your rants work?

I guess at the heart of it there's still the idea that we're all in it together. And the victims of my bits are the powerful in one way or another, in general. It's the powerful or occasionally the dumb. But it's still taking a stance where we're in this together, and are or should be fighting together against a dystopia that we're headed towards or maybe we're in.

You performed at Occupy Wall Street?

I was there the first night, and I performed at Occupy in the first week. I ultimately performed at about a dozen different Occupy encampments around the country. I was also at the first four days of the Occupy that started in Washington, D.C., outside the White House.

What's the legacy of Occupy?

In my opinion, and I think it goes against what a lot of the media wants to portray, Occupy had an immense effect in for the most part ending the conversation about austerity that we were heading towards, and instead moving it towards this incredible disparity in the wealth in our country. I mean with just so much wealth amassed in the top one percent, and even really more like the top point-five percent, it's really just a completely top-heavy model.

People don't give enough credit to changing the conversation or changing the kind of mental path that the country is on. I mean, making "99 Percent" a common term, "One Percent" a common term, and sparking the first-ever global protest movement — there were Occupy movements in Australia, and all over the U.K. and in Ireland — and yet people don't give it credit, as if it achieved nothing.

As a political comic, is it harder getting work?

It makes your path in comedy more difficult. Because whenever you get in front of any crowd, you're saying to at least a certain number of the crowd, "I'm not for you." But I have carefully worked on my comedy over the years, and been in front of thousands upon thousands of crowds to the point that even though my stuff is left-wing, for the most part everybody's still laughing.

That being said, it is a more difficult path. And I think that's why you don't see too many comedians taking it. It's also a more difficult path in that television doesn't want to be involved with you. They'll allow political viewpoints from either somebody that's already a big name, like a Bill Maher, but they don't really like to put on guys that aren't really well known and [who] have political views.

Any observations about the gun-control debate?

I did one of my videos on gun control after Sandy Hook. I don't think there's any benefit on my taking a stance on how big the clip should be in a gun or that kind of thing. The point of the video was to craft a way we can talk about this, like a way we can debate without everyone flipping out. There's certain issues where you just say the word and all debate shuts down. It becomes an instant screaming match of "You're gonna take my gun!" and "Why do you need so many guns?"

I don't know anyone who think you should be able to have your own personal nuclear bomb or your own personal tank, or really your own personal grenade-launcher — although I suppose a few people are for that. We're all for some kind of gun-slash-weapon control. ... The question is, where do you draw the line?

Why do you post so much new material online?

Because I'm a topical comedian, it's like if I'm going to make a point about Sandy Hook, or this video I'm posting today is about John Brennan being appointed CIA head — it has to come out quickly. ... Another part of it, it's really starting to feel like we're living in a time where everyone's got the attention span of a mongoose on meth. You kind of have to keep being relevant.

Even major movie stars — I'm talking you heard their name like every 12 minutes in a newspaper — if they're not in another movie a year later, you're like, "Where's the guy who starred in Avatar?" It's like if you're not continually putting something out, the memory is just very short.

Lucklily, I do the sort of comedy where I enjoy doing this much stuff. But I also imagine that it's the only way forward. Even big comedians like Jim Gaffigan and Louis CK are putting out an album a year because they just have to keep reminding their fans, "I'm still here, and I'm still doing stuff."