A Conversation with Patti Smith 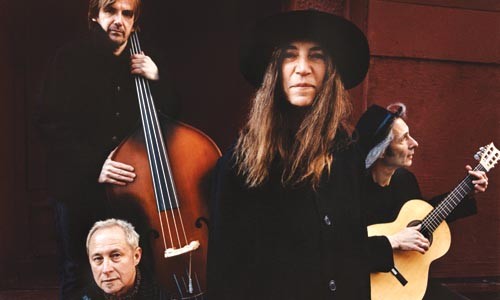 She keeps busy -- you gotta give her that. Just back from a two-month European tour, Patti Smith talked with CP about her literary projects, including a book on her friendship with Robert Mapplethorpe, and her guitar-slingin' son, Jackson Smith, currently in her touring band alongside longtime collaborators Lenny Kaye, Tony Shanahan and Jay Dee Daugherty. Oh, and her brand-new covers record, twelve. On it, Smith's interpretations range from luminous ("Everybody Wants to Rule the World") to reverent (Dylan's "Changing of the Guards") to downright weird (a banjo-driven "Smells Like Teen Spirit"). But perhaps the oddest thing about this collection is its unaffected obviousness -- everybody knows these songs are good. Though perhaps that's exactly what we should expect from this icon of CBGB's-era New York punk.

The new record is almost all classic songs. Why those ones?

There's a lot of beautiful, unknown R&B-style songs that I really love that are jewels, that I would love to record sometime. But my mission on this record was different: My mission was to take songs that had either captured my imagination or had at one time captured the people's imagination, that had relevant lyrics.

Paul Simon -- I don't even like Paul Simon. I could be extremely negative about what I think about Simon & Garfunkel songs. I just don't like them. But ["The Boy in the Bubble"], I thought, lyrically speaks of our present condition, so that's why I did it. I laid aside my feelings about Paul Simon songs and did the song because I thought the lyrics said something important.

With songs you've covered before, like "Gloria," you did a lot of interpretation and extrapolation ...

Yeah, but you know you can't do that anymore, because there's so many copyright laws, and a lot of artists don't want you to do that. And I've gotten in a lot of trouble. That's why the record, again, it's so conservative. I recorded, for instance, "Doves Cry," and added a Bible verse from the Song of Solomon, because there's a lot of doves in it. And Prince himself made me take it off -- he blocked me from putting it out.

It's hard to miss that many of these songs are by artists who died when they were 27 -- Cobain, Hendrix, Jim Morrison.

It's accidental. The thing is, all three of those people were great; they weren't great because they died young ... I admire these people because of the work they did. I don't romanticize their death. I mourned all three of them, and felt even anger at them or disappointment and frustration, because I know that all of them would've done great things. But some people are precocious, too. Arthur Rimbaud wrote some of the greatest poetry in French literature before he was 22 years old. And then there's others that keep evolving.

I'm 60 years old, and I'm still learning. And I still feel like I haven't done my greatest work. If I would've died when I was 27, I would've given the world probably hardly anything.

Yet you were inducted into the Rock and Roll Hall of Fame this year. Long time coming?

The way I feel about the Rock and Roll Hall of Fame is, I never thought we should have one. I thought that rock 'n' roll shouldn't have a hall of fame, I always felt like it was a revolutionary grassroots art. [But] to be chosen to be recognized amongst people like Elvis Presley and Jimi Hendrix and Bob Dylan is a real honor, if you look at it that way. ... I mean, jeez, at the end, my husband and I wrote the song "People Have the Power," and they chose that as the last song to do. My husband [the late Fred "Sonic" Smith], who is a million times greater than me, and more deserving to be there than myself, but he didn't live. And he loved Keith Richards, and I was standing there singing, looking at Keith playing guitar next to me, playing my husband's song. It would've meant so much to him. To see Eddie Vedder and Michael Stipe, The Ronettes, and all these people singing his song, Stephen Stills taking a guitar solo.

I sorta can't believe it in a certain way. I'm the most unlikely person to be in the Rock and Roll Hall of Fame. But I guess I can represent all the unlikely people!