A Conversation with Mike Ness of Social Distortion

Led by Mike Ness' gruff baritone, Orange County punk pioneers Social Distortion debuted with the seminal album Mommy's Little Monster in 1983. After a brief hiatus due to Ness' drug problems, the band returned with a new cowpunk sound, a major-label deal and several mainstream hits, including a cover of Johnny Cash's "Ring of Fire." Ness began a solo career in the late '90s, but soon reconvened Social D, despite the fatal brain aneurism of guitarist Dennis Danell in 2000. The band released Sex, Love and Rock 'n' Roll in 2004, and has been touring regularly, with new material promised for next year. We caught up with Ness via phone from his California home.

You started Social D more than 30 years ago -- what was punk like for a teen-ager at ground zero?
It was a great, very exciting period of time. I was a junior in high school going to Hollywood and seeing all kinds of bands at underground clubs, coming back to school the next day and telling people about it. It was very underground. It felt like a very exclusive thing.

I was an angry kid, being from a broken home and stuff like that. It kind of went from T. Rex to the Sex Pistols -- it kind of escalated. The Sex Pistols sounded like I felt inside.

How did you end up hooked on junk and what pulled you out of that hole?
It was just a natural progression of starting out at an early age and experimenting, and eventually graduating into that. It ended up being a very lonely road I didn't want to go down. I almost died several times. I didn't want to spend the rest of my life in prison or in and out of institutions, so I just finally sought help.

People talk about hitting bottom. Was that the case for you?
Yeah, but it was an emotional bottom, not necessarily situational. I was on the streets, and not many people wanted me around. So it was a very lonely feeling, and the emotional pain forced me to reach out.

You achieved mainstream success even before Nirvana kicked the door in. What were those years like, and was the exposure worth being on a major label?
I'm not really sure they increased our exposure that much. We were in the midst of building ourselves up at that time anyway, and gaining momentum by touring, playing at 150 percent every night to make sure people would come back. But I do remember being able to quit my day job and being able to make this my main focus. That was a great feeling.

These days, you see a lot of old punkers going into country -- Chuck Ragan, Tim Barry, Frank Turner. What do you think is country's allure for punk rockers?
I can't speak for any of them, but Social Distortion has always had a connection to early Americana music, whether it was blues, country, bluegrass, jazz or whatever. It was very important for us to grab ahold of our American roots. Second, the heartfelt-ness and honesty of that music felt like a direct connection to punk music, being basically working-class music, singing about working-class issues.

What was the impact of [guitarist] Dennis Danell's death?
It was awful. We were still in the band together. And he was like the healthiest guy in the band. It was sudden and tragic.  He was probably the friend I'd had the longest. ... Him and I started this in a garage in a period of time when 99 percent of the world was telling us we couldn't do this. He knew how much I loved music and he knew we were going to take this as far as we could. [Danell's death] gave me a new purpose with the band. It was like, "let's carry this on in his honor," and I was able to take a negative situation and try to make it positive.

I understand you're heading back into the studio in January.
We're going to just start recording. We may finish a whole album, we may not. If we don't finish it we're just going to put out an EP. We just want to get something out right now. We want to continue touring next year and this will allow us to. We've been writing songs the last two years and it's time to get back in the studio. 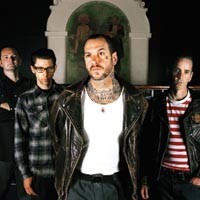 Story of my life: Social Distortion