A Conversation with Megadeth's David Ellefson 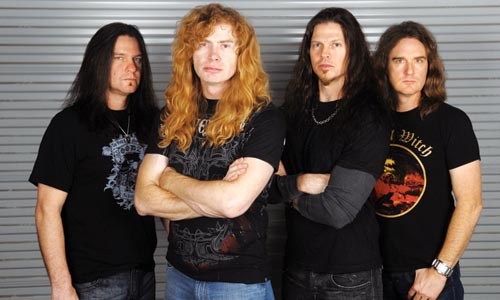 The end doesn't scare us: Megadeth

Megadeth co-founders Dave Mustaine and David Ellefson have been through a lot together since the band's 1983 debut: countless lineup changes, legendary substance abuse, and of course, a stunning body of work that helped define the thrash-metal genre. Following the band's 2002 breakup, they also shared a very public feud and lawsuits; Mustaine re-formed the band without Ellefson in 2004. Now, a month before a special tour celebrating the 20th anniversary of the band's landmark album, Rust in Peace, they've made up and joined forces with drummer Shawn Drover and guitarist Chris Broderick. City Paper talked via phone with Ellefson, who noted that this is also the 20th anniversary of his sobriety. For some, this whole thing might seem a bit too pat. But Ellefson insists it's just the will of God -- who must be a Megadeth fan.

It's crazy that we're even doing this interview. A month ago, did it seem likely that you'd be touring with Megadeth?
Haha -- no! In my heart of hearts I think I always knew, "Look, one day Dave and I will be back in Megadeth again." You don't spend 20 years playing with someone and then never play with them ever again -- that's just unrealistic. The timing certainly couldn't be better.

What's it like to dig into Rust in Peace at this point? My understanding is several of the songs were never played live.
Rust in Peace is an album we wrote in the band room, over the course of about 18 months. So this wasn't one of these "we just e-mailed the files to each other" kind of records, like so many records we make in this business now. When you're in the band room learning tunes, they're printed into your DNA, as opposed to just coming in to learn the parts. There's a process that happens -- the chemistry within the group when you're writing and recording.

You've mentioned that thrash is undergoing a resurgence. What new bands do you follow?
Here in America there's Trivium; their equivalent in England is Bullet for My Valentine. Trivium was [like] Megadeth, Bullet For My Valentine was [like] Metallica -- they were inspired and grew up on what we did. Certainly Lamb of God has become the modern-day Pantera. So there's bands that certainly learned from what we did, but they're doing things in their own way. And that's good, man -- music has to evolve, and there have to be new people who come up the ranks, too.

You've been busy, post-Megadeth -- a lot of interesting projects, including a ministry?
Yeah, MEGA Life Ministries. It's actually a pastor in Scottsdale [Ariz.], at a church that I go to. I grew up Lutheran in the Midwest. I can't say I'm the born-again type [...] but I was always a church-on-Sunday kind of guy. So the pastor asked me to start up this MEGA Life ministries, based on John 10:10 out of the Bible ["The thief comes only to steal and kill and destroy; I have come that they may have life, and have it to the full."]. I've gotten involved in the Christian Musician Summit and Christian Musician magazine -- a lot of people have invited me to be involved in what they do. It's cool because when I was a kid, Christians, they burned all the records I listened to, so I had complete disdain for Christianity as a movement.

Dave and I have been very public about our faith -- we do not hide that that has been a big part of bringing us back together again. Us having those convictions has really led us to a place of forgiveness and wanting to work through any past stuff.

I imagine that's probably easier for Megadeth, where you have maybe more political themes, than if you were in something like Black Sabbath.
I was thinking about that with Megadeth -- it was started as a political thing. Megadeth never was a sex, drugs and rock 'n' roll band. Even though I certainly did my share to partake in that lifestyle, that was never the theme of the band.

While we're having this conversation, I'm thinking "Wow, this is such a great story," but c'mon -- it can't be coincidental that you're rejoining the band now.
Believe me -- to me and Dave, it is no coincidence. Like I always say, "If it's odd, it's God" -- and this one's really odd, so it's definitely God.