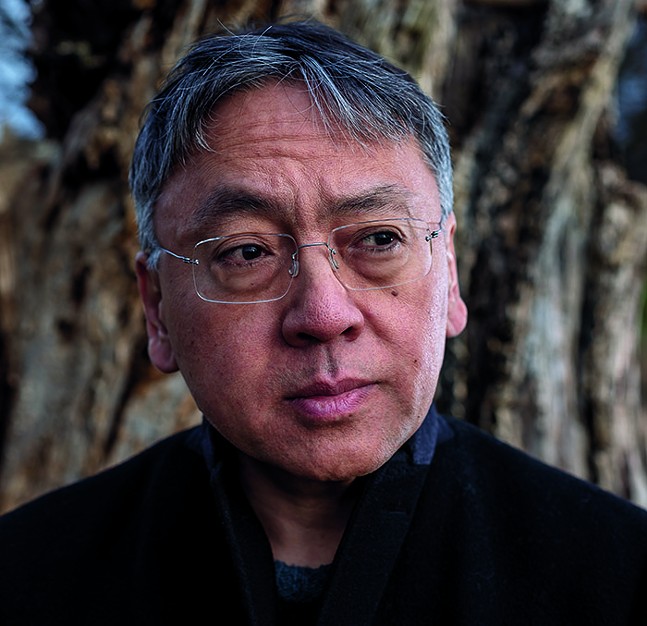 When told his latest novel, Klara and the Sun (Knopf), lingers long after its final pages, he wants to know why. Why do some books linger, he asks, and why do some, even if they are enjoyable, fade away?

“Sometimes books that you don’t even think are that good when you are reading them, they just stay with you for years and years,” Ishiguro says. “For a long time, I’ve been trying to crack this. I’ve been trying to figure out what is the magic formula, if there is one. Because if I could figure this out, this would help me a lot.”

Ishiguro appears Thu., April 15 in a virtual conversation with Madeline Miller, author of The Song of Achilles and Circe, hosted by Pittsburgh Arts & Lectures.

It hardly seems that Ishiguro needs help crafting indelibly memorable stories. One of the most accomplished writers of the last 50 years, his awards include the 1989 Booker Prize for The Remains of the Day and a Nobel Prize for Literature in 2017. All of Ishiguro’s novels except The Buried Giant have been shortlisted for major awards.

And yet he wonders if there’s something else, some quality that is elusive but quantifiably present in memorable books. Ishiguro mentions he used to write songs when he was young. And isn’t that the point of music, for it to linger, to stay in the zeitgeist for longer than three or four minutes?

“The whole idea is to implant songs in people’s heads and hearts, and they’ve got it with them for 30 or 40 years,” Ishiguro says. “It suddenly comes to the surface when they’re going through something, or they’re having a certain kind of experience. That song comes back to them, that’s what you’re trying to do when you’re a songwriter.”

The Nobel committee described Ishiguro’s work as using language “characterized by restraint, even when dramatic events are portrayed.” In Klara and the Sun, those events are driven by the title character, a robot or artificial friend (“AF” throughout the story) to a young girl battling a life-threatening disease. Readers meet Klara in an anonymous American metropolis, waiting in a store waiting to be selected as a companion. She talks to her fellow AFs, worries about not being seen when she’s positioned in the back of the store, and constantly seeks sunlight for its restorative powers.

Ishiguro says he wanted not only to explore the evolution of technology, but its effect on ordinary lives and relationships within families.

“Do people actually start to look at each other in a slightly different way,” he says, “in a world that’s filled with algorithms and data? Do we actually start to think that maybe there’s no special kind of soul in the person that you love? Maybe a bunch of algorithms can map out this person.

“And does it do something to the way we relate to each other, the very nature of human love for a particular individual? Is that going to change? I guess I’m asking those kinds of things.”

The setting of Klara and the Sun is an anonymous U.S. city that could be New York or Chicago, Los Angeles or Pittsburgh. There’s a dearth of specific landmarks even as the story moves to a remote, almost agrarian landscape. Even the timeline of the story is vague; it could be 2024 or 1984.

Ishiguro is purposely vague about such details so his novels can be transportable. The origins of that vagueness stem from his earliest experiences as a writer with his first two novels, A Pale View of Hills (1982) and An Artist of the Floating World (1986), both set in Japan. He admits to being a bit annoyed when it was said the books were about the Japanese mind or Japanese psychology.

“I was thinking, ‘Come on, they’re just set in Japan,’” Ishiguro says, adding that he was ultimately grateful that the books were so well-received. “I was trying to write about universal things that everyone feels.

So, since my third novel [The Remains of the Day, set in England], I’ve always been conscious that I have a story and I’m trying to put it down in different locations. I usually have the story and themes and relationships first.”

Not that settings are arbitrary, Ishiguro adds. For Klara and the Sun, he thought about recasting the story in England. It would have taken no more than a week to make the necessary changes. But ultimately, he decided it had to be set in America.

“I had these images in my head of American realist painters of the 30s, and I really wanted to evoke those images, like Edward Hopper or Ralston Crawford, Charles Sheeler or Grant Wood,” Ishiguro says. “Those kinds of paintings that have acres of field with a big sky, and a grain silo on the horizon, no people, or these cityscapes with skyscrapers and shafts of light, lonely diners. I had all these things in my head.

“From an intellectual point of view, I could have put it in England. But the atmosphere would have [been] different.”

There’s another reason for Klara and the Sun’s setting. Ishiguro thinks that American society is younger, more unsettled without the deep ingrained traditions of European countries. “I was trying to show a society in flux,” he says. “All these huge new changes, breakthroughs in science and technology that have happened, that I believe are actually happening now. I thought America was a more suitable place because many of these innovations are coming from America, but also because it’s a country that’s always trying to reorganize itself. It is a country that’s asking questions about, how do we organize our society, and it’s often changing. I thought it was a more apt place to set a story with a backdrop that could turn dystopian, or it could be okay.” New & Noted with Kazuo Ishiguro, in conversation with Madeline Miller at Pittsburgh Arts & Lectures. 7 p.m. (Available online for one week.) $36. (Includes a hardcover copy of Klara and the Sun shipped to your home.) pittsburghlectures.org