A conversation with Dan Savage 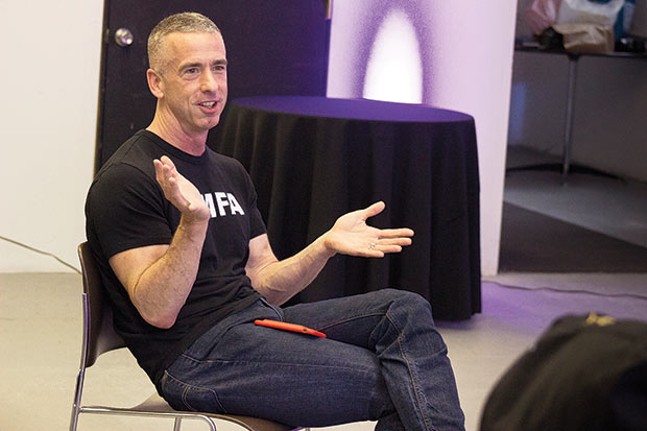 Dan Savage’s visits to Pittsburgh are rare. He has been here “a few times, never more than 36 hours” before captivating a packed house at New Hazlett Theater with a live performance of Savage Love on June 21. (The engagement was co-sponsored by AIDS Free Pittsburgh and City Paper.)

Before he took the stage, Savage spoke with local comedian/anti-bullying activist Gab Bonesso, who has joined CP as a regular contributor.

The “It Gets Better Project” has helped so many children with that visibility of seeing someone who you aspire to be or could become. Growing up in Catholic Chicago, who was your “Dan Savage”?
I was lucky enough to grow up in the city and not the suburbs. And while there weren’t a lot of visibly queer people on television at the time, there were gay men moving into the city, moving into the North Side of Chicago, who were very public and very visible.

I have this early-childhood memory, it is so vivid, of being in line at Water Tower Place to see a movie (Logan’s Run) with my parents, and there being a couple of guys in line in front of us who were holding hands. And my mother wrapped her arms around me — not my two brothers, me — and pulled me towards her as she said to my father, over and over again: “Those men are weird.” Which was code for “those men are going to grab our effeminate son and run from the building,” right? And I looked at those guys knowing exactly who my mother was talking about and I was, like: “Oh, they are fine, they’re happy, they’re in love; so, I can have that too.” I saw it with my own eyes.

My program, Gab Bonesso’s Gab Squad … I like to think I show the kids that it gets better. But I had this experience in West Virginia, where this young boy had come out to his family. They threw him out of the house and he was homeless. Thankfully, he was able to move in with an open-minded family.
Forty percent of homeless kids are queer youth who have been kicked out or thrown out by their families. It’s incredibly dangerous. You know there is a message that the queer community sends, sometimes recklessly, to queer kids — that coming out is the solution to all of your problems. When coming out is often, for many queer kids, the beginning of brand new and sometimes worse problems, and we have to say that, too. We have to say to kids: “Think about your circumstance and whether you can risk coming out right now before you come out.” And that’s wrong, and it shouldn't be that way, but there aren’t the services out there for homeless youth period, much less homeless queer youth in particular. And sometimes I get in trouble for saying this, but sometimes my advice for queer kids who want to come out is “wait”.

So, you think there is that fine line between safety and being who you are and you have to really walk that?
And we have to say that to queer kids. Coming out is not the solution to all of your problems. It’s the beginning to all new ones, hopefully better ones. And sometimes coming out means homelessness. Sometimes being outed means homelessness. And parents who throw their queer kids out should be prosecuted for child endangerment.

It’s child-abuse. Where do you think the anti-bully movement needs to move next? We’re working on visibility. We’re working on curriculum programs that teach kids how to advocate for themselves, how to standup for themselves, how to ignore the bullies. But do you think the next step is more focus on mental health or educating empathy?
Well, mental health is a huge co-contributing factor. It’s not like you take a stable, healthy queer kid and stir in a little bullying and they kill themselves. It’s a co-factor for suicidal ideation. So, we need better mental health.

People say, “What do we do next?” We need socialized medicine that includes mental-health care treatment, and we don’t have that. We also have the problem with bullying that’s tied to class and economics. If a family can’t afford to feed their kids, they are not going to be able to access the services their kids might need. So, economic inequality is something the anti-bully movement has to take on, too — but how huge is that? How do you take that on?

Do you think we could educate empathy? It seems like people only gain empathy when something bad happens to them.
Well, Conservatives only become empathic when something bad happens to them. Conservatives lack moral imagination. Megyn Kelly is for maternal leave because Megyn Kelly had a baby. Rush Limbaugh is for treatment not incarceration for drug addicts because he got himself addicted to drugs. Rob Portman is for gay marriage because his son came out. Nancy Regan (was) for stem cell research because Ronald Regan got Alzheimer’s disease and stem cell research might help with that. When it happens to a Republican, they do a 180[-degree turn] on that particular issue and they become screaming liberals — but not on any other issue. They lack a moral imagination. “When your kid was gay and your kid couldn’t get married, f**k your kid. Oh, my kid is gay and can’t get married; I’m for gay marriage.” That’s the Republican f**king defect.

When you have a situation like that, though, and you get the rare example of people who are closed-minded having some sort of awakening, even if it’s because of their own personal situation… how do people really take advantage of that to improve situations?
Well, I think you point out to people: “Well, you came around to gay marriage because your kid is gay, so if your wife had Alzheimer’s [disease], would you come around on stem cell research? What if … blank? What if … blank? What if … your daughter got an unsafe abortion and died, would you give a s**t then?”

You can reason with the person who has had the one epiphany on the one thing that personally touched them, and maybe inspire them to have others. But I also think you need to welcome them — like Rob Portman for gay marriage; when he came out for gay marriage, that was actually really important. I didn’t scream, “F**k you Rob Portman!” in Rob Portman’s face for supporting gay marriage. I said: “That’s great! Wait till you find out your daughter is a woman; maybe you’ll be pro-choice.”

One Savage Love question: In recent years, the term “daddy” has turned into like a sexy term for anyone dating an older, self-identifying male. Does the opposite work? If someone is dating an older, self-identifying woman, is “mommy” equally as sexy?
Well, [Vice President] Mike Pence calls his wife “mommy.” Ronald Regan called Nancy “mommy.” So, I think lesbians should appropriate that “mommy” s**t from the GOP!