A conversation with comedian Eugene Mirman.

"I went there and created the major of comedy." 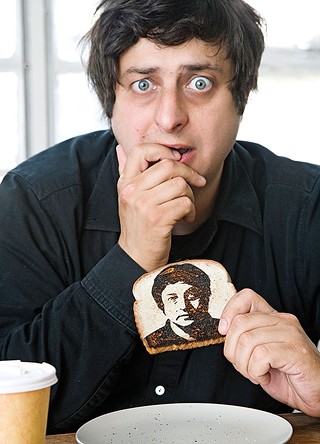 These days, being a comedian demands engagement with all varieties of media; success as a standup usually involves a podcast, a book deal and a TV pilot. Few, however, navigate the wide world of comedy as easily as Eugene Mirman. Mirman lives and breathes his comedy, from his roles on Delocated and Bob's Burgers and his surreal home-made videos to the full-page ad he took out to complain about his personal experience waiting around for Time Warner Cable, As Mirman puts, it, "I love doing a huge variety of things." He recently spoke with CP by phone.

You'll be in Pittsburgh on Valentine's Day. Do you have any strong feelings about that holiday?

It's funny, I don't. That's not to say that I haven't celebrated Valentine's Day in the past, but it's neither a time where I had something particularly great or terrible happen. On the other hand, Arbor Day: Have I got stories.

Did you always want to pursue comedy?

As a kid I really loved standup, and at some point I think it occurred to me that that was something you could potentially do as a job. Then I found Hampshire College, where you could design your own major. So I went there and created the major of comedy, which was actually a sort of amazing experience.

What did that involve?

I did a lot of different projects, taking writing and acting and history and sociology classes and film classes. I also did independent studies on, you know, physiology of laughter. For my final project, I wrote, produced and performed a one-hour standup act that I also promoted, and essentially a lot of the stuff that went into that that would be considered extracurricular in other places. I wrote a weekly column for our newspaper, I hosted a radio show, stuff like that.

Did all that give you an academic approach to comedy in practice?

It just gave me a lot of experiences. It's not like when I go and do comedy, all my jokes are about the incongruity of what you expect [laughs]. In a sense it was very academic, but it was also very practical.

You're probably best known for playing Gene on Bob's Burgers. Did developing that adolescent character involve tapping into your 11-year-old self?

Frequently, my character references things that are more from my childhood than someone who would be 11 today. In the second episode, I make an [improvised] joke about Salman Rushdie. [It's] me arguing with my dad, Bob, that Salman Rushdie wrote The Lion, the Witch and the Wardrobe. But it is the sort of thing that a precocious 11-year-old could overhear and insist. ... A lot of it is that we're all friends in real life and we record all together, which is not common for cartoons. And as a result, we get to play off each other a lot.

You've told stories about your parents' experiences in Cold War-era Russia, including one about your mother finishing a phone conversation and then hearing a recording of the conversation played back. Did their stories give you a sense of the absurd?

I like [the idea] that a real story from another country would give me a sense of the absurd [laughs]. I've been here since I was 4 years old, so I know a lot of the stories that my parents have, [but] I think a lot of my comedy comes from being more personally an outsider-slash-not-completely-an-outsider in America. I grew up Russian during the Cold War, but at the same time I was pretty much American. On the other hand, I do speak Russian to my parents — it's not that I'm not part of that culture.

I think [what] benefited me greatly was the idea that we came to America, and you could, you know, become what you want. That was always very much at the forefront of my thinking in terms of studying comedy. This idea that you could have a goal and work towards it and accomplish it, that came partially from leaving Russia and coming to America. It very much seemed like anything was possible. Which [is a concept] I think a lot of Americans don't engage as much as immigrants do.

So you think Americans are too incredulous about the American Dream?

I do. I think that it's something that people are cynical about and don't have a full appreciation for.