A conversation with Chris Carrabba of Dashboard Confessional

The group will headline this summer’s Taste of Chaos tour

Dashboard Confessional, the emo band that found success in the early-aughts, will headline this summer’s Taste of Chaos tour, which hits Pittsburgh June 7 at the Petersen Events Center. Dashboard Confessional will be joined by Taking Back Sunday, Saosin with Anthony Green, and The Early November. The Taste of Chaos tour kicks off June 3, the first time it’s been active in North America since 2009. Dashboard’s lead singer, Chris Carrabba, took time last month to chat with City Paper about Taste of Chaos, the death of Jon Bunch, the new Dashboard album and more.

We’ve lost a lot of important figures in the music world recently. As a musician, is it crushing to you to see so many idols pass in such a short amount of time?

Yeah, it hits a little close to home, and this isn’t a guy who’s super-popular, but my friend Jon [Bunch] from Sense Field passed away a few months ago. He was the third singer in Further Seems Forever, which was my first band, and he died unexpectedly. It’s different, probably, because maybe fewer people know him. But he’s so important to our scene, the scene that this [tour] is comprised of; we’ve lost an icon there. Maybe he doesn’t cross into the mainstream lexicon, but [he was] an important guy who helped build up something that we all carried forth from there. 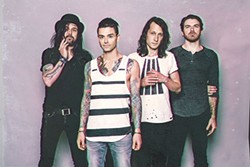 Speaking of the scene, how does it feel to be going out with Taking Back Sunday, Saosin and The Early November?

We’re going out with some of our best friends; with bands we’re huge fans of. I was on the phone with Adam [Lazarra of Taking Back Sunday] for an hour, hour-and-a-half yesterday, just talking about stuff. I’ve never been in another music scene, so maybe this is how it is. If it is, awesome; if it isn’t, I feel really lucky to be a part of a scene where we all came up together and we all helped to foster the bands behind us. We all helped to give a hand back to the people that pulled us up on. We all made it … we stayed close even when things got super-crazy. We’re talking about bands that started by playing basements and VFW halls. That’s a real thing. We’ve come up, we’ve gone through it together. We’re in it together. We’re lifers.

I’ve been trying to go through the history of this scene. It seems that between 2000 and 2002, all these bands that were underground took off around the same time. It’s crazy.

It’s crazy to us, too. The biggest aspirations we probably had, if I’m being honest, were to play real clubs, instead of basements. And we far surpassed that. But we kinda kept our heads together because we weren’t going out there like, “We’re gonna be the biggest bands in the world.” We kinda walked out there being like, “We don’t know if anyone is going to ever listen to us. But this will be a lot of fun.”

How refreshing is it to be able to work on new material and then announce it later, with no timeframe or hard dates?

It’s the very best. I’ve been actively writing and recording since last summer’s tour. Since last summer’s tour, I haven’t toured again, except for going to Brazil with Maroon 5. I haven’t done interviews. I’ve just been kind of quietly sequestered, having fun making music with nobody paying attention. This is something that doesn’t happen to you once you’re an established band. It happens on your first record; you get to take a long time; enjoy what you’re doing; no one’s paying attention. When you’re a new band, the sense of urgency is “I want to be a band.” The difference now is we are a band and we get to do this for pure joy. So I will have a new record. It’s been a long time since I’ve had a new record. But I’ll have a new record when I feel like I’ve made the exact kind of record I want to make and, this is the biggest part, I’ve finished having fun for the moment, chasing songs. It’s very liberating.