A conversation with Built to Spill’s Doug Martsch

“I don’t think an artist who has all day to work on their art makes better art.”

BUILT TO SPILL with HELVETIA, CLARK AND THE HIMSELFS

Boise, Idaho’s Built to Spill became one of a slew of once-indie rock bands that signed to major labels in the ’90s. Since 1997, the members have been workhorses for Warner Bros. Records, releasing lo-fi, indie-sounding rock propelled by singer/guitarist Doug Martsch’s gruff vocals and wavy, even gruffer riffs. The band is touring in support of its eighth album, The Untethered Moon.  Through a muffled connection —and amidst some technical difficulties — Martsch took the time to speak to City Paper. 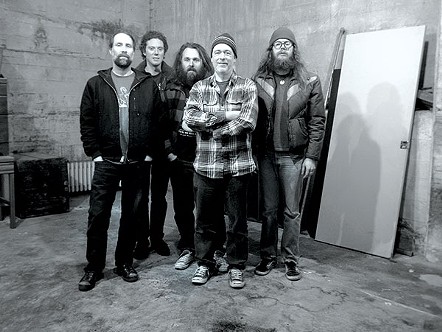 Photo courtesy of Stephen Gere
Built to Spill (Doug Martsch, left)
Your new album sounds like it’d fit nicely with your ’90s work. How do you see the band’s evolution or lack of?

We just kind of do what we want to do. I don’t see a trajectory to it.

And you recorded this one with a new rhythm section. How did that come about?

Well, in the fall of 2012, the old rhythm-section guys both quit at the end of the tour. They were burnt out for different reasons. They’d both had enough of it, and we had to replace them. We got a couple guys who were part of our crew to replace them.

I read that you recorded an album in 2012 and scrapped it. Why was that shelved?

We recorded in the summer 2012. I did the rhythm section and I did quite a bit of overdub. Then we did a tour and those guys quit, and then I decided to bag the record and start over with those new guys. It made more sense and would work a little better.

What inspires you to go into the studio and lay out an album?

As soon as I have a batch of songs that are ready to go. When we went in the studio in 2012, we didn’t really practice that much. We were going to try to elaborate on them in the studio. Sometimes, that’s the idea. Sometimes, we like to work things out a lot before we go into the studio, which is what we ended up doing [for The Untethered Moon]. The songs we were working on were very well rehearsed.

What does the title, The Untethered Moon, mean?

Nothing. I mean, it means something. It’s open to interpretation.

I saw that There’s Nothing Wrong With Love is coming out on vinyl again. What prompted that?

Do you ever listen to your old records?

Nope. Every so often, I will go back to figure something out to play live, but that’s it.

As someone who grew up in the age of vinyl and started releasing music on CDs and cassettes, how do you think the change to all-digital has affected rock music?

Did you make your best music when you had a day job?

I think it may have been because I was younger. I don’t know about that. I don’t think an artist who has all day to work on their art makes better art. That’s all I will say, and it’s a lot different from that. It’s not really a job. It’s something people do to escape work.

When I was in high school, owning an album by Built to Spill or Yo La Tengo was a mark of sophistication. Do you still feel cool?

Built to Spill came around in a time when the lines between alternative and mainstream were being blurred. Did you always want to be a band that appealed to college stations and people really into music?

When I started, I was definitely under the impression that only people who were really, really into music could get into us, who were passionate about it. I never thought we were a mainstream act, or I had any ability to be in a mainstream act.

Do you think your peers in the ’90s rock scene are still making good music?

You know what, I really just listen to old soul music and old reggae music. I don’t really listen to modern music at all. Those old [physical] formats of music are kind of symbols for things I like. I still listen to a few of my friends’ bands, but otherwise I don’t give a fuck.