Pennsylvania voters are no strangers to getting text messages about the upcoming election. Especially in a swing state like this one, get-out-the-vote campaigns are targeting voters at a rapid rate. But over the past week, some Pennsylvanians have been getting texts from the group APP PAC that contain harmful statements about transgender people, and incorrect statements about Democratic presidential nominee Joe Biden's policies.

After Maria Montano received a text asking, "Did you see Joe Biden endorsed sex change operations for children as young as 8? That's way too extreme and frankly, it's really weird," she posted a screenshot on Twitter voicing her frustration at what she called "transphobic garbage."

Montano, a labor and transgender rights activist, says texts like these "can cause lasting harm," both in terms of hurting the recipient, and by creating an atmosphere of intolerance. It's not clear how widespread the text campaign was, but other Twitter users brought City Paper's attention to the issue, and other staff members reported receiving the texts as well. The American Principles Project did not respond to a request for comment.

"As a trans woman, it is mentally and emotionally exhausting to see people use my life and existence as a tool to sow fear and hate — and these messages make it harder for us to feel safe and supported," says Montano. "We deserve better, and we deserve elected leaders who will stand with us against these attacks on our rights."


Whoever is responsible for sending me this transphobic garbage can fuck right off. pic.twitter.com/8wzF9bKQVQ

The APP PAC is part of the American Principles Project, a conservative think-tank that has advocated against trans rights, gay marriage, and access to abortion. In August, American Principles Project executive director Terry Schilling went on Fox News and implied that allowing trans women to participate in women's sports would take away athletic scholarships from Schilling's daughters.

The text campaign also includes a video from APP PAC, which they have also been posting on their Twitter feed, claiming that Joe Biden has explicitly endorsed "sex changes for kids" and that these operations are "dangerous" and cause "permanent damage to children."

Biden's platform for LGBTQ rights does explicitly support rights for trans adults and youth, though not in a sinister way as the video implies. "On his first day in office, Biden will reinstate the Obama-Biden guidance revoked by the Trump-Pence Administration, which will restore transgender students’ access to sports, bathrooms, and locker rooms in accordance with their gender identity," states part of Biden's plan.

Other parts of Biden's plan for trans youth include working to reduce harassment and violence, addressing high suicide rates, tackling homelessness, and more.

There is not a scientific consensus among doctors that allowing children to transition is "dangerous." One study form the Journal of the American Academy of Child & Adolescent Psychiatry found that kids who transition have lower rates of depression and anxiety, compared to trans kids who don't transition.

"When trans youth are loved and supported, we see a profound impact on their lives and their mental health, and that is why every major medical association follows the affirming care model for trans youth," says Montano. "We should be doing all we can to protect and celebrate trans lives and not allow this type of election year fear-mongering to keep us from living our lives free from fear and discrimination."

What the infrastructure bill could mean for Pa. Amtrak expansion 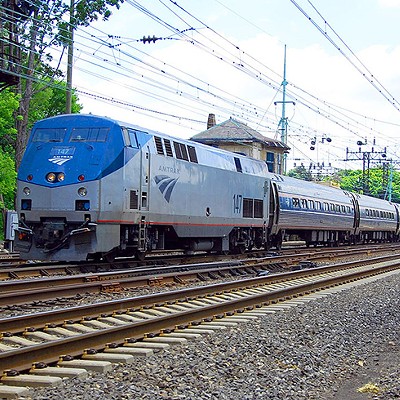 Fresh off 2021 wins, Pa. GOP eyes a bright midterm. Can Democrats stop them?