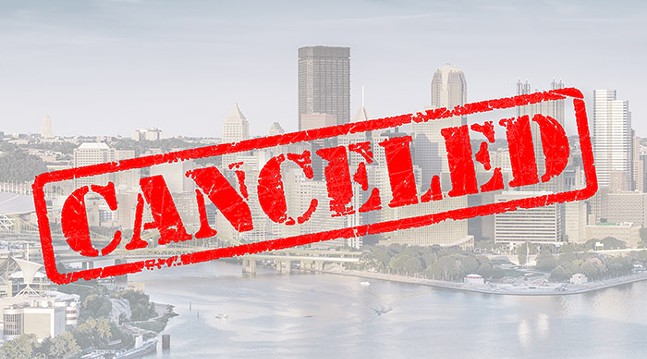 On Wed., March 11, the World Health Organization deemed coronavirus, which causes the disease COVID-19, a global pandemic and confirmed cases have grown exponentially in countries like Italy, China, South Korea, and others.

Confirmed cases continue to grow in the U.S. as well. The virus has now been confirmed in all 50 states and has infected hundreds of thousands of people worldwide and resulted in thousands of deaths, primarily seniors.

To help slow the spread of the virus, a large number of Pittsburgh events have been canceled or postponed. People are being advised to avoid events with 10 or more people, as the virus can spread easily from person to person, even those that are not experiencing any symptoms.

Here is a list of events in the Pittsburgh area that have been canceled or postponed. Pittsburgh City Paper will update this list as more events announce cancellations and/or postponements.

• Face-to-face classes at Indiana University of Pennsylvania, until March 23

• 3 Rivers Comicon: canceled
•  TEKKO 2020 will be moving to the weekend of June 25-28th
• All events at Thunderbird Cafe and Music Hall have been cancelled or postponed for in indefinite amount of time
• ACT Testing scheduled for April 4 are rescheduled for June 13 or a future test date of your choice
Hello Neighbor programming has been cancelled, offices are closed, and mentors and mentees are asked to not have direct contact for the next two weeks.
• 6cycle closed March 16-29
• All events of 50 or more people are now prohibited, starting March 15
• All programming and services at The Irma Freeman Center for Imagination, closed until further notice
• All programming and services at the JCC PGH: suspended through March 30
• All events at Community College of Allegheny County between March 16-21: cancelled
• All weddings and events at Heinz Chapel: canceled March 16-May 31
• All programming and events at Sto-Rox Library in McKees Rocks: suspended through March 31
• Black Transformative Arts Network Launch at Jeron X. Grayson Center, March 12: postponed
• Trump campaign “women for Trump” bus tour stop, March 12: canceled
• Bernie 2020 Pittsburgh Office Opening, March 12: canceled
• Credit Builder Loan Announcement + Kiva PGH Celebration, March 12: canceled
• Friday the 13th event at Pittsburgh Tattoo Company, March 13: postponed
• Challah Royale: The Screen Printing Edition at Repair the World, March 13: postponed

• Pittsburgh Marathon, May 3: canceled
• Komen Race for the Cure, May 10: postponed until September

• The Decutschtown Music Festival announced today that the festival scheduled for July 17-19
• Griffin House at Club Cafe, April 27 has been postponed to December 6.
• Waxahatchee at the Rex, April 11 has been postponed to a TBD date
• Caamp at Mr. Smalls, March 27 has been rescheduled to August 12.
• Against Me! at Mr. Smalls, March 18 will be rescheduled
• Nathaniel Rateliff at the Byham Theater has been postponed. Makeup date will be announced
• Ghost Chant / Secret Keeper at Preserving Underground, May 6 has been canceled
• Birthdayy Partyy at Scenario, March 27 has been canceled
• The LACs originally scheduled for April 17, 2020 at Jergels has now been rescheduled to July 30, 2020.
• Hotel California-Ultimate Tribute to The Eagles concert scheduled for March 26 at 7:30pm the Palace Theatre in Greensburg, Pa., has been rescheduled for Wed. June 17 at 7:30 p.m.
- Against The Wind-The Ultimate Bob Segar Experience- concert scheduled for March 27th at 7:30pm at The Palace Theatre in Greensburg, PA has been rescheduled for Thurs. Sept.10th at 7:30pm at The Palace.
• Roots & Blues Night at Thunderbird Cafe, March 19 is canceled
• Control Top, Drill, Medium Ugly, and Fun Dogs at Mr. Robot Project, March 27 is canceled.
• Twin Peaks with ROOKIE at Mr. Smalls Theatre, March 12: canceled
• JAUZ - Dangerous Waters Tour at Roxian Theatre, March 12: postponed
• Karan Casey at The Roots Cellar, Pittsburgh Center for the Arts, March 13: canceled
• The Calm Before the Storm - A Night of Irish Traditional Music and Song with Mark Dignam & Friends at Club Cafe, March 13: canceled
• Hunnycomb Single Release with Donora & Buscrates at Spirit, March 13: canceled

• Against Me at Mr. Smalls Theatre, March 18: postponed

• A Concert Celebrating the 335th Birthday of Johann Sebastian Bach at Church of the Redeemer, March 22: canceled
• A Bowie Celebration at Carnegie Library Music Hall, March 22: rescheduled to September 4

• RAIN - A Tribute to The Beatles at Palace Theatre, March 24: postponed

• Sunsleeper at The Smiling Moose, March 24: canceled
• Guster at Carnegie of Homestead Music Hall, March 25: postponed
• Music for Exhibitions — Electricity: Songs from the Time of Tiffany at The Frick Pittsburgh, March 25: canceled

• All locations of Carnegie Library of Pittsburgh: temporarily closed to public March 15-31
• Rivers Casino: closed with no indication of when reopening will occur

• Tune It! Tuesdays with Phat Man Dee and Friends at Black Forge Coffee House, March 17: canceled
• All public and private tours of the Vanka murals: canceled through March 31
• All events at White Whale Bookstore in March: canceled, but the store is still open for normal hours
• Brillobox: closed until March 24

• All workshops at Prototype PGH in March and April: canceled
• All events at City of Asylum's Alphabet City in March: canceled
• Speakeasy After Dark at Carnegie Museum of Natural History, March 13: canceled

• Make Sure You Have Fun at Spirit, March 14: postponed
• Second Saturday Studios: Strike a Pose at The Frick Pittsburgh, March 14: canceled

• The Queen of Cardistry at Liberty Magic, March 13-29: canceled or postponed

• All restaurants and bars have been ordered to close dine-in facilities for 14 days effective 12:01 a.m. on March 16

• Bloomfield Farmers Market: closed until further notice, but planning to open before May 9

If you have an event that has been postponed or canceled due to precautions around the coronavirus — or an update on a postponement date we can add to this list, please email info@pghcitypaper.com.