A Chinese woman lost her job at Westinghouse in Shanghai, so she flew all the way to Cranberry to ask for it back | News | Pittsburgh | Pittsburgh City Paper

A Chinese woman lost her job at Westinghouse in Shanghai, so she flew all the way to Cranberry to ask for it back

CP photo: Jared Wickerham
For the past three weeks, Constance has been standing outside the Westinghouse Electric Corporation headquarters in Cranberry, Pa., every weekday, holding laminated signs that read “I just want my JOB back” and “I want to see CEO.” Even through snow, Constance stood in a winter coat, her high cheekbones poking through her scarf and wool hat; her 5’1” frame dwarfed by the modest Westinghouse sign to her right.

She had worked at Westinghouse for nine years and claims she was unfairly fired in 2018. And now, she’s demanding to see Westinghouse CEO, Jose Gutierrez.

That sort of boldness and determination would be remarkable if she were an American employee fighting to get her job back, but the job Constance lost was located more than 7,000 miles away, in her native China. Since losing her accounting job at the Westinghouse offices in Shanghai at the end of last year, she's self-financed this mission: flying to Pittsburgh via Hong Kong and New York, spending more than 36 hours in layovers, putting herself up at a hotel in Cranberry, and committing her days to braving the cold in the hopes that this self-assured gamble would pay off.

But Constance is facing an uphill battle. As an employee, she never had a direct contract with Westinghouse, which leaves her with basically no leverage to get her job back. She was hired through a third-party employer. She came to America planning to take advantage of labor rights she believed were protected here, ones that aren't protected in China.

“When they said, ‘You don’t work for Westinghouse,’ I was very hurt by that,” says Constance. “I don’t think it is right. I come to America to fight it out.”

Constance only spoke to Pittsburgh City Paper on the condition of anonymity, fearing other Chinese businesses would blackball her when she attempted to find work upon returning home. Constance is a pseudonym, but CP verified her identity through her passport, work ID badge, and with Westinghouse officials. Constance speaks some English but is not fluent. CP held multiple interviews with her using Google Translate, as well as an extensive phone interview with a Mandarin interpreter from a Pittsburgh university.

When she first arrived in Cranberry, Constance merely walked into Westinghouse headquarters and politely requested a meeting with company officials. She says a Westinghouse vice president met with her and sympathized with her predicament. She was hopeful her message would be relayed to the CEO.

Constance patiently waited to hear back, spending her days in a small hotel room at a Quality Inn in Cranberry, chosen because it's among the area's least expensive. For breakfast, she eats a complimentary banana from the lobby. She also takes the free apples and stores them in the room’s mini-fridge. She walks across the street every other day to Panda Express and eats a dinner of Kung Pao chicken and fried rice, saving half of it for the next day. Constance drinks hot water out of her Thermos, as is customary in China. She keeps her room at a balmy 75 degrees (Shanghai’s climate is warmer than in Pittsburgh). Constance has a visitor visa from when she toured the Grand Canyon last year. It's fairly easy for middle-class Chinese citizens to get 10-year visitor visas to the U.S. 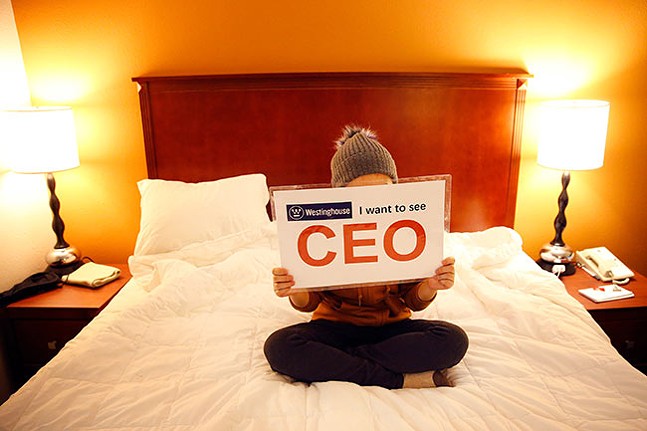 CP photo: Jared Wickerham
Born in 1978, Constance grew up on Chongming Island on the outskirts of Shanghai. She says her parents worked harvesting rice, saving enough money for her to attend college in the city. She now lives with her husband, a freelance salesperson, and their two children. Constance says her position working for Westinghouse made her the breadwinner of her family. While she has been in America, her husband has texted her pictures of their 5-year-old daughter and 2-year-old son. She is away from her family during China’s biggest holiday season: Lunar New Year.

“They send a photo every day,” says Constance. “I depend on that.”

After a couple of weeks without hearing back, she realized the Westinghouse CEO wasn’t reaching out, so she took her strategy to the next level. She protested by standing for two hours each day at an entrance to Westinghouse HQ (one hour as commuters arrived at work in the morning, and the other as they left work in the evening).

On Jan. 24, Constance says local police were called and confronted her. That’s when she decided to start reaching out to the press, following the suggestion of a ride-hail driver.

She says she never intended for her story to become a controversy, but decided that getting the press involved was necessary to procure a meeting with the CEO. She explained her predicament to CP. She first signed a contract with FESCO, a large Chinese contracting agency. Her salary was just under $2,000 a month, notably higher than Shanghai's average of $1,135 a month, according to Forbes.

Constance says she started work in 2010 as support for Westinghouse’s construction of an AP1000 nuclear reactor, about four hours south of Shanghai. As the project was prolonged past the estimated completion date, as is common with large projects, Constance’s contract was renewed several times, but always through FESCO.

In 2017, when Constance was pregnant with her second child, she maintained working occasional overtime hours, even though her doctor recommended cutting her hours back because her baby was suffering from gestational diabetes and other ailments. At times, she breathed through a tube of oxygen for her child’s health.

“It will haunt me greatly,” she says through tears. “Every day I worked so hard for Westinghouse.”

But it appears that once work on the AP1000 was completed, Constance’s contract expired. It’s unclear if she was ever told that her job would be more than temporary. Westinghouse did not respond to direct questions regarding Constance’s contract. But the company did send this statement:

“We are aware that a former Westinghouse contractor from China has been holding signs near our offices. We are aware of her presence, and have met with her to discuss her concerns. We have also asked our employees to exhibit caution and safe driving practices as they enter and exit the Westinghouse campus in order to ensure her safety.”

Even though Westinghouse has given Constance little to hope for, she has preferred to keep her complaints within the company. She still holds onto the idea that since the CEO responded to her directly, he must want to help. She says she’s the only lower-level employee at the Shanghai offices to contact and receive a response from the CEO.

However, there is a Chinese court system Constance could have utilized for an alleged labor violation. But she says she didn’t believe the court system would give her a fair shake.

Halegua writes that third-party contracting “allows the company to avoid the responsibilities” that other direct employees are owed, such as “social insurance and severance.”

By February 2016, China had abandoned much of the idea of supporting labor rights when “China’s Minister of Finance suggested that workers already enjoy too much protection and warned against any expansion of collective bargaining,” according to Halegua.

It’s understandable that Constance believed labor rights, and rights in general, were better in America.

CP photo: Jared Wickerham
She is obsessed with American civil rights, which she learned about in college. She talks about the 1964 Civil Rights Act and she even brought with her a Chinese book about Martin Luther King Jr. Her favorite King quote (also the title of one of his books) is “All labor has dignity.”

“If it were a Chinese company, I would have given up,” she says of Westinghouse. “But it is an American company. I have a chance at equal rights.”

America’s civil rights are undoubtedly better than China’s. But civil rights are not the same as labor rights. According to the Foreign Policy magazine, research conducted with college students in Beijing in 2016 “found that Hollywood themes of spontaneity, nonconformity, and self-realization particularly resonated with young Chinese fans of American television.”

Her favorite American movie is Shawshank Redemption, a tale of a man escaping an unjust prison sentence. She keeps a graphic on her computer of a scene from the film in which Morgan Freeman says “Hope is a good thing, maybe the best of things. And no good thing ever dies.”

Many American workers are struggling with the same problem Constance is facing. More and more companies, particularly in the tech industry, rely on contract work to avoid hiring direct employees in America.

According to a 2017 study from global freelancing platform Upwork, about 57.3 million Americans (36 percent of our workforce) are now freelancing. A CNBC article states that Google, one of America’s most profitable companies, had more contractors than direct employees in 2018.

Constance experienced the reality of labor laws in America, not a sunny Hollywood version. The cold winters, the non-committal corporate speak, and the realization that even American-style rights aren’t as ideal as people might want to believe. She is still holding out hope for a meeting with the CEO, but Westinghouse isn’t giving any indication that will happen.

“Before I came to America, I was hopeful that I would get a resolution,” says Constance. “Now I am not so sure about that. ... Maybe in the future, I won't speak up. It is too disappointing. I thought it was different with an American company.”