A Children's Museum design competition proposes remaking the North Side as a "Charm Bracelet." 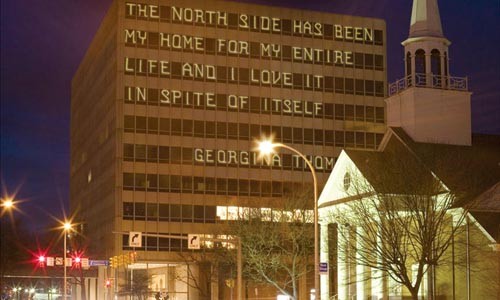 Jane Werner, executive director of the Pittsburgh Children's Museum, points with pride to the giant window in the east wall of the former Buhl Planetarium (now part of the Museum). Light pours in and, through the frame, the historic Carnegie Library looms gallantly.

The perfectly placed aperture, however, is actually a recent alteration to the historic fabric, opened at the insistence of design architects Koning Eizenberg, who sensed that a visual connection to the greater neighborhood would have many benefits. Even in a building that has won an award from the National Trust for Historic Preservation, "sometimes you have to knock down a wall," says Werner. Because doing so can help you reconnect with your neighbors.    That philosophy of reconnection guides the "Charm Bracelet Competition," an enterprise that has gathered four multidisciplinary teams -- artists, architects, landscape architects, graphic designers and historians -- with a flexible mandate to propose ideas to improve a large swath of the North Side. An exhibit of the design work is on display at the Children's Museum through March 11. Funding came from the National Endowment for the Arts and the Heinz Endowments.    The Charm Bracelet name comes from the idea that the Children's Museum and its collaborators -- including The Andy Warhol Museum, the National Aviary, the Carnegie Science Center, the Mattress Factory art museum and the New Hazlett Theater -- are jewel-like features that can benefit their communities by connecting to them, and to each other, more explicitly, in the process making the area a more family-friendly one.

Most design competitions pit one group against another to generate the best design for eventual construction. Here, however, Children's Museum Assistant Director Chris Siefert worked with architect Paul Rosenblatt, of Springboard Design, to select and work with teams whose variety of skills and perspectives would enrich the project in a more collective fashion. "It was good to choose teams that complement each other," says Siefert.

Significantly, faculty and students from the Urban Lab at the Carnegie Mellon School of Architecture (where I am an adjunct faculty member) conducted community meetings, provided research assistance to the competitors and produced their own design schemes, which are also part of the exhibition.

The teams include international talents and local standouts:

The designs are wide-ranging in both materials and chronological scope. All of them deserve close scrutiny. Pentagram's proposal for artistically lit and painted railroad overpasses is cogent, but rich in implications and possibilities. Principal Paula Scher suggests new collaborations and competitions for these. "You have to work with what's there and celebrate it," she says.

The Colab Architecture team produced, essentially, design schemes for several different locations. A small designed landscape by CLEAR at Cedar and East Ohio streets here, a conceptually lit 279 underpass by SO-AD there. Felicia Davis's proposal to fill Heinz Field Parking with "solar trees" is one of the more visionary proposals. Brett Yasko's idea to use the gridded windows of modernist slab buildings to flash personal-text messages is one of the most hilarious.

Doug Suisman produced an historically rich and very moving history (in both PowerPoint and video) of Allegheny City, now the North Side, that should be required viewing for anyone in urban design. His beautifully envisioned long-term plan to restore the historic name and street grid could be celebrated in the short term with a neighborhood-wide scavenger hunt.

Lastly, the muf team suggested the seemingly unlikely but very clever pairing of the modern practice of tailgating (for football games) with the 19th-century practice of municipal housekeeping. The latter was a proto-feminist movement to use skills associated with women in the household as instruments in larger city planning. muf produced a delightful series of small models that straddle a rich border between conceptual art and dollhouse play.

In a neighborhood where the stated goal is to become a family district, the language of domesticity is evocative and appropriate. The Children's Museum is opening windows and doors of all varieties. Says Siefert of the Museum and its new facilities, "We've taken care of our own house, and now we're going out into the community."