A century ago, Pennsylvania stood almost entirely stripped of trees

Photo courtesy of the Pennsylvania Department of Conservation and Natural Resources
A deforested area Big Pocono, in Monroe County, in 1922

Look out the window while driving the turnpike, or flying across the state, and you’ll surely consider Pennsylvania pretty well forested. Hike a state park or forest, same deal: Despite centuries of farming, logging and heavy industry, and such recent incursions as the fracking boom, the commonwealth still has, if nothing else, plenty of leaves overhead.

But that canopy camouflages an astounding fact: About a century ago, Pennsylvania stood almost entirely stripped of trees.

In 1895, say state records, Pennsylvania contained some 9 million forested acres. That was about one-third of the acreage forested before Europeans arrived. And most of what was left was less real forest than underbrush, prone to soil erosion, and to wildfires that charred hundreds of thousands of acres a year. In a state of 28.7 million acres that was once almost completely tree-covered, only a few hundred acres of true old growth remained. As described in a 1995 history of the state’s Department of Forestry, ours was a landscape “of stumps and ashes.” 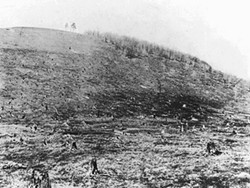 Photo courtesy of the Pennsylvania Department of Conservation and Natural Resources
Lumbering, forest fires and grazing took their toll near Little Marsh, in Tioga County.

Mostly to blame was unchecked logging, especially the several decades of intensive logging that began in the mid-1800s. Pine went for ships’ masts, and hemlock bark was used to make tannin for the leather industry; aside from supplying fuel and building materials, forests were clear-cut for charcoal (before coke and coal were used to smelt iron), railroad ties and roof-props for coal mines.

In 1895, with most of the trees gone, the logging industry had begun moving west. Hoping to prevent all of Pennsylvania’s soils from washing into its rivers — and reclaim the other ecological and aesthetic benefits of forestland — officials created the Department of Forestry. The state began buying land to conserve. It started tree nurseries and trained foresters. By 1915, replanting was in full swing; by 1936, 179 million seedlings had been planted on state and private lands. During the Great Depression, some 50 million trees were planted thanks to the New Deal work program known as the Civilian Conservation Corps.

Photo courtesy of the Pennsylvania Department of Conservation and Natural Resources
Mount Tom, in Tioga County, after logging, in 1907

Today, Pennsylvania has 17 million acres of forest; most is privately owned, with 2.2 million acres owned by the state. While it’s a different forest from the one Native Americans inhabited — the post-clear-cutting growth included more hardwoods, for instance — the recovery has been remarkable.

In June, I backpacked near Pine Creek Gorge, in Tioga County, which encompasses the so-called Grand Canyon of Pennsylvania. In the late 1800s, north-central Pennsylvania was the epicenter of American logging. Now those tanneries and sawmills are gone, demolished or returned to nature, along with the boom towns that sprouted around them. Instead, on steep ground once shorn of trees ran trails through stands of mature spruce, hemlock, maple, oak and birch, and the largest patch of mountain laurel I’ve ever seen, blooming pink and white. Underfoot was thick with decades’ worth of damp leaves and evergreen needles, all slowly becoming soil — and absorbing rainwater. Also along the way were pinhead-sized blueberries, still green; beautiful waterfalls; and countless tiny tree frogs, one sign of a mended forest. 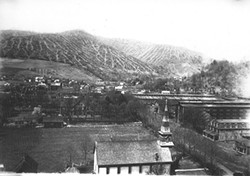 Photo courtesy of the Pennsylvania Department of Conservation and Natural Resources
An eroded hillside in Potter County, in 1918

It’s also a managed forest: While ecologically sensitive areas are off-limits, Pennsylvania oversees logging in its state forests, and gas-drilling, too (though Gov. Wolf has reinstated a moratorium on new drilling leases). In fact, even scenic tourist favorite Pine Creek is touched by environmental controversy: A waste-disposal company has proposed using gas-industry drill cuttings — which can contain heavy metals, toxic chemicals and radiation — to extend the runway at a regional airport that sits in the Pine Creek watershed.

In a world where we often distantly outsource our needs for lumber, oil or cropland, the environmental damage caused by gas drilling is an instance where it’s happening in our own backyards. While nature can heal, it’s important to remember that while it might take only weeks, say, to destroy a forest, it takes generations to bring it back.