A Cat in Paris

In this animated tale, a sly cat helps perpetrate — and solve — crimes 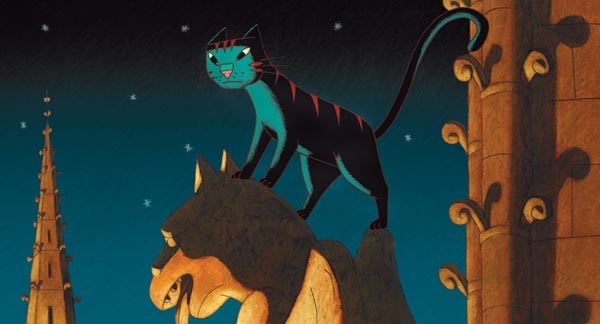 A Cat in Paris

Cats may rule the Internet these days, but they don't often get starring roles on the big screen. But it's a tabby that saves the day — and more — in A Cat in Paris, an animated kids' film from Jean-Loup Felicioli and Alain Gagnol (Mia and the Magoo).

The film, which was nominated for Best Animated Feature at last year's Academy Awards, is relatively short, at just over an hour, but offers a sweet, humorous story about a silent little girl named Zoe, her cat, a kind-hearted thief and some gangsters.

Dino the cat is Zoe's pet, but when night falls, this feline-with-two-lives slinks off to work with Nico (voice of Matthew Modine), an acrobatic jewel thief. Nico runs afoul of some gangsters, who are also in the sights of Zoe's mom, Jeanne (Marcia Gay Harden), a police detective. The gang leader captures Zoe, leaving Nico, Jeanne and Dino the cat to chase the gangsters around Paris, culminating in a breathless showdown high atop Notre Dame.

The hand-drawn animation is charming, with lots of shadowy cut-outs doubling for Paris by night. The human characters are quirkily rendered, with flat, angular faces. But despite the two-dimensional nature of the protagonists, the filmmakers effectively deliver the graceful fluidity one expects from both cats and cat burglars.

The story is primarily for the younger set, but adults will appreciate the film's vaguely cubist aesthetic and its soundtrack (with Billie Holiday and Django Reinhardt), as well as the film's homage to various cinematic crime capers.