Most of photographer Joel Sternfeld's images are, curiously, unpeopled 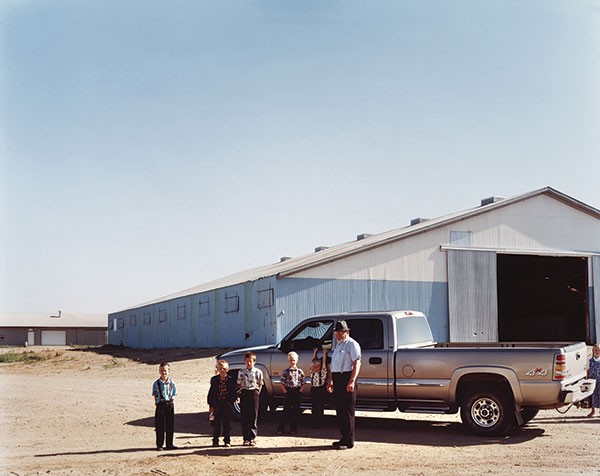 Joel Sternfeld's Carnegie International photo series is called Sweet Earth: Experimental Utopias in America. Still, perhaps only half of these 29 large-scale C-prints document someone's attempt to create a thoroughly new and ideal way of life for a large group of people.

True, the Kaweah Cooperative thought itself a model society; the 1880s socialist logging community, undone by the creation of Sequoia National Park, is ironically symbolized by Sternfeld's image of the General Sherman Tree (their "Karl Marx Tree"). But other images include Chicago's city-hall garden roof — a fine idea, but hardly society-shaking. And if Leonard Knight's epic outsider-art Jesus shrine Salvation Mountain is a utopia, it's his alone.

Sternfeld is an acclaimed photographer based in New York City. In a recent Carnegie Museum of Art talk, he traced his thematic concerns to youthful readings of Thoreau. Many of his subjects have deep-green ideals, including a pensive Paolo Soleri, who founded the iconic, half-built eco-city Arcosanti.

Most photos in Sweet Earth come with several hundred words of explanatory text. But curiously, only a handful of the photos depict people who have anything to do with the experiment in question.

Understandably unpeopled are the geodesic-dome ruins of celebrated 1960s Colorado artists' collective Drop City. And Ambridge, Pa.'s long-defunct Harmonist community, Old Economy, is occupied only by a bride who's hired the place for her big day. But why is Tennessee's The Farm — a long-running, still-thriving collective-living experiment with many spinoffs and charitable projects — represented by an ancient school bus on blocks?

Populated, Sternfeld's photos spring to life. The 1982 portrait of famed pacifist Scott Nearing — whose 1930s back-to-the-land ethos presaged many of these experiments — is deeply poignant. A self-governing recreational community based on an abandoned California military facility is charmingly represented by a young woman in a tiara and secondhand prom gown.