A car spray-painted with the word "QUEER" is being shared on social media as an act of vandalism. But is it? | News | Pittsburgh | Pittsburgh City Paper

A car spray-painted with the word "QUEER" is being shared on social media as an act of vandalism. But is it?

CP photo: Lisa Cunningham
Lawrenceville performance artist Dig poses with their "Queer Car"
Concerned Pittsburgh residents have taken to social media to warn neighbors of a possible hate crime: “Queer” has been spray-painted on a car. Q-U-E-E-R is spelled out in giant capital letters on the right side of a white 2006 Ford Escape, the word spanning nearly the entire length of both doors; black paint drips down from almost every letter including the second “E,” shorter than the rest, leaving room for the front door handle above it unblemished.

“A horrible act of vandalism” reads the caption on a photo of the vehicle posted to Facebook.

Several posts after the first, someone claimed the car's owner painted the letters themselves, directing readers to an Instagram account named “queercar,” which includes several photos of people posing with the spray-painted car and images of three handwritten letters that people have left under the windshield.

“I can get this bullshit off your Ford,” reads one. Another, “I saw the graffiti on your car and wanted to make sure you felt safe.”

The white SUV in question was purchased four months ago in upstate New York for $5,800 by a 22-year-old Lawrenceville performance artist who goes by “5 Digit Disco.” Dig, for short. (If you haven't figured out the tongue-in-cheek meaning behind their stage name, look it up on Urban Dictionary.) When Dig bought the vehicle, which they have affectionately named “Ricky,” it was unmarked. Ricky’s graffiti came two months later.

“I’m not comfortable publicly stating if this was a criminal act or if I was the one who did it,” Dig says over a PBR in a booth at The Park House on the North Side. “I think what matters is that I like the vandalism of my car. I like the spray paint, and I’m going to keep it.”

Ricky’s scrawled graffiti matches Dig’s aesthetic, whose body itself is a work of art. Their hair, a mix of blonde and red, has been shaved into a combination of a mullet and a mohawk; on the left side of their skull, a giant black tattoo of a squirrel, its tail wrapping down to the back of their neck. A bullring piercing peeks out from the bottom of their nose, and other smaller graffiti-esque tattoos decorate their arms and legs, including one that reads “gay garden.” 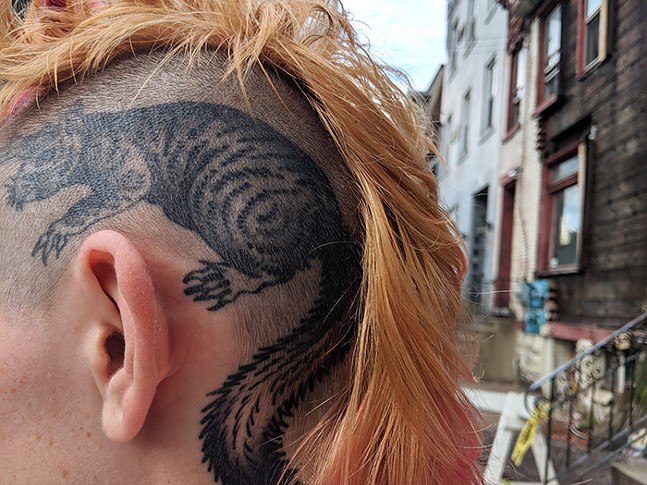 CP photo: Lisa Cunningham
A squirrel tattooed on the side of Dig's head
Whoever painted the car, whether Dig or someone else, seems to have done it in a way that perfectly matches Dig's style, down to the black marker smiley face hand-drawn with crossed-out eyes on their worn denim jeans, held up over a white T-shirt with bright yellow checker-marked New York taxi printed suspenders.

Dig says they started the Instagram page after a friend pointed out a social media post written by a stranger concerned for the car owner’s safety. “I definitely don’t want to trigger trauma in people,” Dig says, adding that it was important to have people know that they’re OK with the graffiti and are not in any danger.


But Dig says they do think the graffiti should be labeled as an act of hate, whether or not they did it themselves or if it was done by someone else.

"If it was done against me, a hate crime towards my identity or my perceived identity and my community," they say. "And if it was done by me, then it’s a hate for societal norms and what people perceive as morally correct.”

Dig says they have gotten one note from an LGBTQ center, but says they believe most people who leave notes on Ricky are CIS women. The majority of people who approach them in person, however, are "average looking white men" who express concern for their safety. Men want to know who did it. Some have offered to paint over it at a discount; some others have offered to beat up whoever did it.

“People face violence and discrimination that keeps people from living their lives, whereas graffiti on my car doesn’t affect me in any way."

“In the scheme of things, it’s so minute. It’s silly,” they say. “People face violence and discrimination that keeps people from living their lives whereas graffiti on my car doesn’t affect me in any way, and I would say it’s a passive act, non-confrontational.”

Dig says they have personally faced discrimination in their past for being queer. After growing up in Columbus, where they say classmates called them gay before they were out to themselves, Dig moved to study at the University of Cincinnati's College of Design, Architecture, Art, and Planning, where they graduated with a degree in fine arts. “I was crushed by my surroundings,” Dig says, adding that Cincinnati was “way too conservative.”

"I feel like Pittsburgh is this beautiful little hub where I feel very safe most of the time," they say. Dig says their friends and family are supportive of their work. Their mom follows both their personal and the Queer Car on Instagram.

When first looking at the word on their car, Dig says they were reminded of a photograph by Leslie Lyons, titled "The Motherfucking First Amendment," which shows writer and performance artist Forest 'T-Rex' Thomer photographed beside his car: "Fuck you, I'm a motherfucker" printed in black letters across the side of his vehicle.

"That photo really stood out to me, and having that on my car kind of felt directly related to that," Dig says. "The reason he did that was for the First Amendment. He used to get pulled over all the time, and he won multiple court cases in regards to the First Amendment and that curse words are protected." 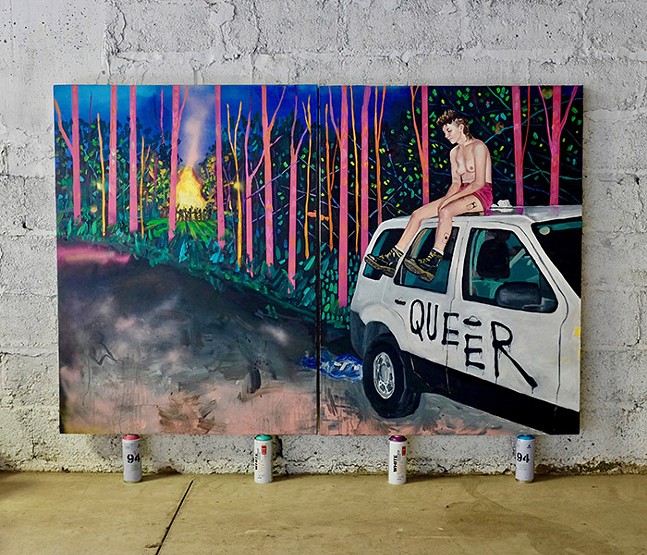 Dig has found the public’s serious reaction to seeing the graffiti surprising and even humorous. It’s not like its an offensive slur like “faggot” or “dyke,” they argue. “Queer,” they say, has been reclaimed by the LGBTQ community and even appropriated into the lifestyles and fashions of heterosexual folks and should be celebrated.


They also think discomfort is a good thing. "I’m regularly uncomfortable by where I am put in society on a daily basis. I have to face micro-aggressions and discrimination as a queer and gender-queer person," Dig says. "It’s simply as regularly having people neglect my pronouns ... or either feeling fearful or uncomfortable to use a restroom which is something most people don’t think about."


A number of people pass by Ricky when Dig walks to the car parked on Cedar Avenue. Many people glance over, then walk past. One woman yells out, "Is that a mongoose on your head?!"

"It's a squirrel," Dig says with a laugh. No comment on the car.

Then finally, someone comments. A middle-aged white man comes over, obviously concerned. "Is this your car?"

CP photo: Lisa Cunningham
Dig with passerby Chris Gates
His name is Chris Gates and he says when he first saw it, he thought someone might have accidentally tagged the wrong car, thinking he and his partner in the small car parked in front of Ricky, might have been the intended target.

Gates says it's horrible that someone would spray that on a car, "unless you did it yourself," he adds, looking at Dig inquisitively. Dig does not comment.

Asked what he would have done if it were his car, Gates says that while he prefers the word "gay" to "queer," he thinks he too would probably keep it. He says he admires Dig for keeping it.

Dig says they don't often see people react like this because they don't tend to stand by their car, and when they're driving, they don't make a point to look for people's reactions.

"This is a fucking shame," Kathryn Penn II says as she approaches Dig on the sidewalk while still talking to Gates. Penn, a Black woman, says she is tired of hate. Her words of advice? Dig should add to the graffiti, paint around it, "make it pretty."

"It's amazing what you can do with a symbol of hate," Penn says. "Make it more positive."

If speaking to the press is part of Dig's performance work, they're doing so confidently and carefully, weighing each word's importance before they say it out loud. "I don’t have a character that I’m playing," when asked about their artwork and stage performances, which typically include a mix of song, poetry, and avant-garde, often titillating and sometimes nude performances. "It’s me."

Less than a week after posting this story, Dig reached out to City Paper and asked us to post the following update which they have written in response to the public's reaction after reading their story:

While many found my paint job amusing, I didn’t realize that ambiguity of intent would be so negatively and painfully received by other GSM (gender and sexual minorities) folx. I regret not being completely transparent and stating that yes, I spray painted “queer” across my vehicle. I apologize to those it has negatively impacted, and I have painted a heart next to queer in a similar style to the text so that, hopefully, in the future, the only shock (if any) will come from people wondering why some queer would vandalize their own vehicle.

They also submitted the photo above, which shows the newly painted heart on the side of the Ford Escape.