A Bronx Tale isn't quite "one of the great ones," but the Pittsburgh leg of the tour is still worth your dough | Theater | Pittsburgh | Pittsburgh City Paper

A Bronx Tale isn't quite "one of the great ones," but the Pittsburgh leg of the tour is still worth your dough 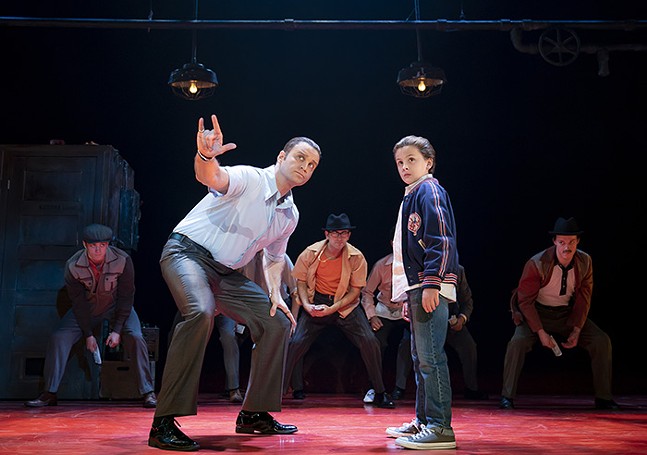 Photo: Joan Marcus
Jeff Brooks as Sonny, Trey Murphy as Young C, and the cast of A Bronx Tale
This musical could have been “one of the great ones,” but a predictable plotline and a lackluster soundtrack hold A Bronx Tale back from being as good as one would expect a touring Broadway show of its caliber to be. There is, however, a silver lining: There are plenty of great moments, which are just good enough to make purchasing a ticket worthwhile.

It’s an easy grab, starting off with that line, as “one of the great ones” are words sang repeatedly throughout the performance, on stage through Sun., Nov. 24 at the Benedum Center. In the musical, a touring show brought to Pittsburgh through The Pittsburgh Cultural Trust’s PNC Broadway series, the expression refers to a love interest, but by the end of the evening, it was hard not using it as an analogy for the rest of the show. (It was actually one of my least favorite songs of the evening, but it’s the catchy kind that’s hard to get out of your head, especially when — like numerous songs in the production — the first version of the song, with its repetitive, tiresome chorus, is followed by a reprise.)

The story is half Goodfellas, half West Side Story, the first which makes sense when you see Robert DeNiro’s name on the Playbill with original directing credits. (DeNiro also starred in the film adaptation of the story.) It’s a classic mob tale, one you’ve seen in nearly every mob tale ever told: Bronx mob boss Sonny (Jeff Brooks) takes Young Calogero (Trey Murphy) off the street after the kid witnesses a murder in front of his stoop and doesn’t rat. Young Calogero — or “C” as Sonny renames him — is adopted as an honorary member of his Belmont Avenue gang, paid to help out at Sonny’s underground gambling ring, against the wishes of his loving father Lorenzo (Nick Fradiani) and mother Rosina (Stefanie Londino) who have better dreams for their son.

Photo: Joan Marcus
Alec Nevin as Calogero and Kayla Jenerson as Jane in A Bronx Tale
Present day Calogero (Alec Nevin) breaks the fourth wall as the narrator of the story, addressing the audience as a high school teenager in 1968, with flashbacks to 1960 when Sonny first took him under his wing. The West Side Story side of the tale comes into play in the second act, when Calogero falls in love with Jane (Kayla Jenerson), a girl from a few blocks over on Webster Avenue — a much livelier street than Belmont Avenue, to be honest, and where I started wishing the entire story took place. He’s a white Italian, she’s Black, and despite others trying to keep them apart, Calogero thinks she might be “one of the great ones.”

If only Young C never grew up. It's not just that 1960 was a better year — listen to the crowd erupt during a replay of that year's famous World Series game, for one. But Murphy and Brooks have more chemistry together as Young Calogero and Sonny than the wannabe lovers of the production. During duets of the latter, Jenerson’s beautiful but booming pipes overshadow Nevin’s quiet lyrics by a mile. The former couple, however, create the perfect partnership, with Murphy’s Young C stealing every scene he’s in with his voice to his dance moves. Seeing this kid work the stage is worth the ticket alone, and Brooks’ Sonny only helps amplify the young actor’s talents, the pair moving in sync and bouncing their lines off each other — bada bing! bada boom! — like butter.

Another performance of note is Fradiani’s Lorenzo, whose touching performance as a father who wants a better future for his son shines through, especially when he’s pouring out his heart in songs like “These Streets.”

There are also some incredible moments in set and lighting design, notably the way innovative set changes transport the audience between the time periods in quick succession, as well as an absolutely brilliant visible introduction to the gang of mobsters. (All stereotype gangsters, natch — the fat guy, the ugly guy, the unhinged crazy guy, etc.) Trigger warning: there are some flashing lights and gunshot noises during this production; lots of the word "fuck" thrown around; and, if you're repulsed by Afterschool Specials, bring a barf bag for the ending.

Going back to that song from up top that’s still stuck in my head: Sonny tells Calogero that you only get three great loves of your life, so you need to do a test to see if a gal you like is “one of the great ones.” While his test isn’t that important, it's still not worth spoiling, so it’s best you just find out during the show yourself. But to me, a test of a great musical theater performance includes great acting, great music, and a great plot. Stealing another line from that song, because hey, I can be predictable too: This one has “just enough good ones. They’re fine, kid, go out there, enjoy.”