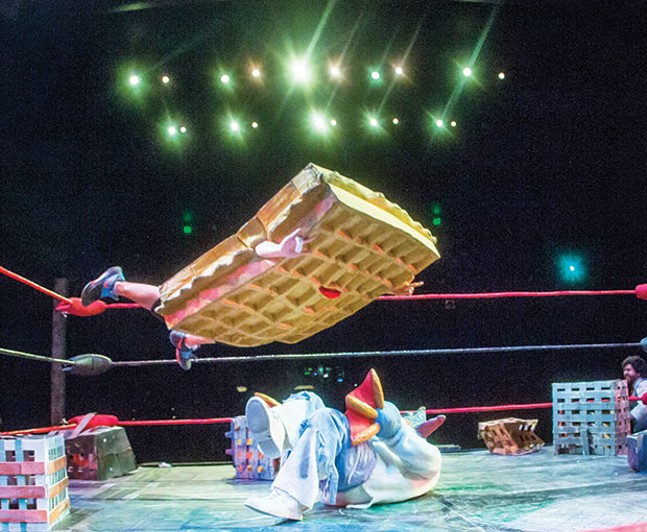 Professional wrestling is no stranger to eccentric characters. In fact, they’re part of what makes it so fun. Imagine wrestling without John Cena and his memorable theme song, Stone Cold Steve Austin’s beer smash, or Hulk Hogan’s handlebar mustache (and goofy tweets).

The characters of Kaiju Big Battel are just as over-the-top as most pro wrestlers. The only difference is that they’re not exactly human.

There’s a meat cleaver-wielding, anthropomorphic soup can. Kung-Fu Chicken Noodle’s bio lists enemies as “everyone.” His tagline reads: “Mmm Mmm Bad!” On any given night, he might battle French Toast, a walking waffle whose stereotypical accent is the only French thing about him. And don’t forget malicious Dr. Cube, a Minecraft-esque humanoid created by Nazi bio-engineers, who “sleeps, breathes, and eats evil” because of a failed attempt at self-plastic surgery.

Kaiju Big Battel — the misspelling of “battle” is now intentional, though it was initially a typo on a T-shirt — parodies pro wrestling and those cheesy Japanese monster movies that air weekends on Turner Classic Movies at, like, 3 a.m. It’s one-part wrestling, one-part cinematic experience.

“I wish I had a punchy thing to say, but, essentially, it’s monster fighting,” says Randal Miller, director of dance programming and special projects for the Pittsburgh Cultural Trust.

“Imagine professional wrestling, but with the added aspect of destroying a city, a cardboard city, in the ring.”

The creation of Studio Kaiju, an independent performance group based in Boston, it’s billed as “the world’s only live monster mayhem spectacle.” Rand Borden, the architect of what he calls “fightos,” created Kaiju Big Battel in college, and the production has since garnered itself a pretty fair cult following.

It’s not quite WWE, but it doesn’t need to be.

After the wrestling, there will be a Fur Ball party outdoors in Katz Plaza for wrestling-loving furries and humans alike. Anthrocon is this weekend, after all. Masks and face paint are not permitted inside for security reasons, but those in full fursuits are welcome at the party.

“If we have a good mix of ‘normal humans’ and fursuiters at this party, I’ll be pretty pleased with that,” Miller says.

When Kaiju Big Battel came to Pittsburgh in 2017, it oversold the August Wilson Center — the Cultural Trust crammed 660 fans into the 492-seat theater. This time, it’ll be at the Byham Theater, which usually plays host to refined productions such as A Music Christmas Carol.

Kaiju Big Battel is quite the opposite.

“It’s kinda just raw fun,” Miller says. “One of the best things about it … is you just forget how much fun it is to just scream at something like it’s real, even though it’s so clearly not real.”