“This is like our Christmas in the summer … we get ready for them [all year] and try to surprise them any way we can." 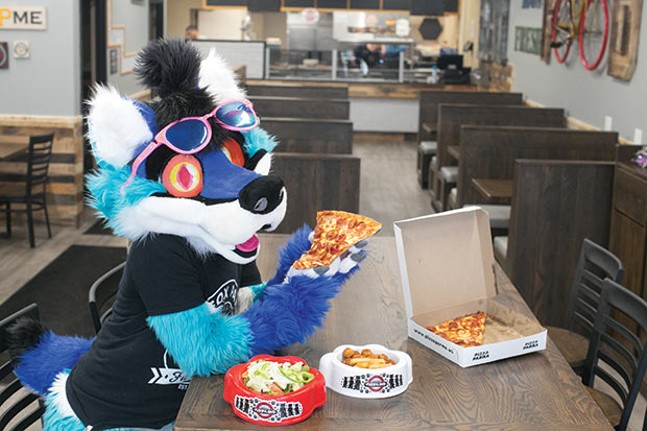 All it took was sidewalk chalk, a hopeful restaurateur and thousands of people in anthropomorphic suits to create an unlikely relationship between a restaurant and the furries who saved it.

Started by Brazilian immigrant Fernando DeCarvalho in 1998, this little restaurant found itself in the middle of Pittsburgh’s first Anthrocon back in 2006, when the convention moved from Philadelphia. DeCarvalho decided to make it a welcoming place for con-goers.

“[Fernando] is a very friendly fellow,” says Sam Conway, chairman of Anthrocon. “He reached out to our group, I think, just about before anyone else did.”

In the wee hours on the eve of Anthrocon, Fernando took sidewalk chalk and drew large paw prints from the Westin Hotel, primary lodging spot for furries attending the convention, all the way into his restaurant. Fernando’s Furryland Cafe was born.

About three months before Anthrocon 2012, Fernando’s Cafe was hit by a recession. Its existence was threatened. Furries from all over came together and raised about $22,000 for Fernando, enough to keep him open for the next convention.

“There’s a unique feature to the furry community,” says Conway, known to con-goers as “Uncle Kage.”

“They’re generous, sometimes to a fault. But in a matter of five days, we had gathered $22,000 in donations [for the cafe].”

Fernando remained a friend of the convention. Even now, after Fernando has long since left and the cafe is becoming a Pizza Parma, the restaurant continues his legacy by providing furries with everything they need to have a pleasant dining experience.

Baris Budak, the new owner and a friend of Fernando, spends months before Anthrocon meeting with his team about what they’re going to do to keep the furries happy and coming back for more.

“The Monday and Tuesday [before Anthrocon], we start our ‘Bowl Special,’” says Budak. “So what happens is, when they order the food … we serve them in dog bowls that come with lasagna wraps, chips and a drink.”

you can take it, rinse it and put food in it the whole week of the convention.

Engraved dog bowls aren’t the only thing Fernando’s brings in for Anthrocon. This restaurant has even found a supplier that will sell 36-inch straws, so that fursuited con-goers can have a drink through their suits.

“This is like our big holiday,” says Budak. “This is like our Christmas in the summer … we get ready for them [all year] and try to surprise them any way we can, and give them a ‘wow’ when they come in.” 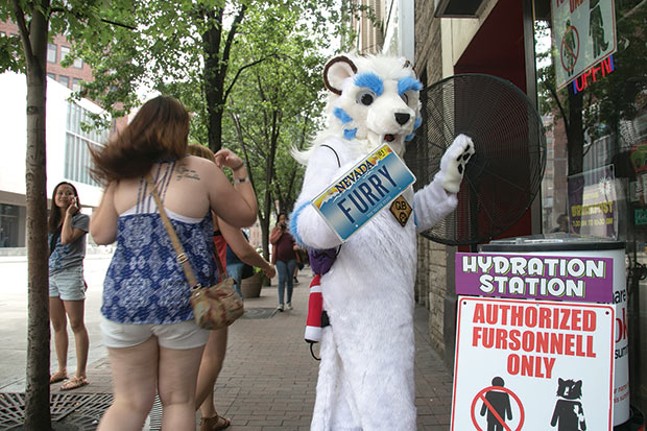 CP file photo
A hydration station outside Furnando’s during Anthrocon

Fernando’s may have been the first restaurant to connect with our yearly visitors, but others have followed. Some restaurants in the area make small adjustments to menus, such as changing names of drinks or posting friendly signs. And the furries have noticed.

“When [restaurants] even offer just interesting takes on the menu, they don’t even change anything, but they accommodate us just by renaming something or making a light-hearted joke … [it] says ‘Hey, we like you here,’” says Manick, a furry from Pittsburgh. “And I’m sure that’s a good business tactic, but it’s unlike anywhere else I’ve been.”

Restaurants surrounding the convention center on Penn and Liberty (such as Condado or Ten Penny), not only welcome furries, but encourage them to walk in just to say hi or greet people eating lunch or dinner. This friendliness and warm welcoming from surrounding restaurants and businesses keeps furries coming back in increasing numbers, every summer.

To us, these places may just be a place to eat, but for furries they represent an evolving acceptance in mainstream society.

“It’s not just [Anthrocon] itself at this point,” says Manick. “The restaurants, the businesses, the EMTs, the city has made it so welcoming, and almost a staple of [Pittsburgh], rather than just a convention at the convention center. And it’s very unique in that fashion.”