‘Flower’ is about to win the Stanley Cup with a hockey team in Las Vegas. Why can’t Penguins fans move on, too? 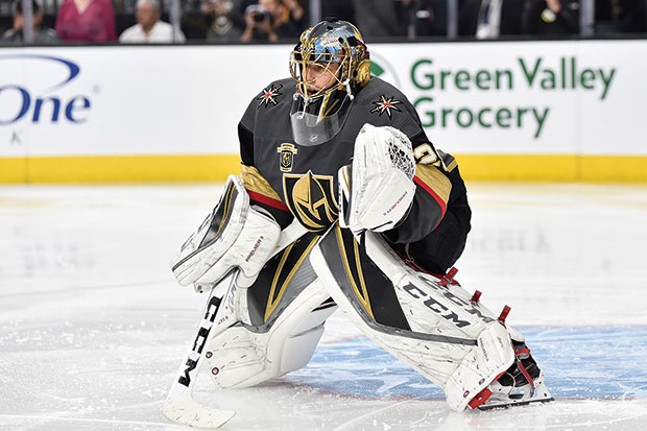 Pittsburghers need to know it, too.

This is no way a suggestion to avoid watching the Stanley Cup Final. If any citizenry is familiar with how the NHL’s championship series will likely play out, it’s the seen-it/lived-it people of Pittsburgh. The only thing standing between the greatest goal-scorer of his generation and Lord Stanley’s cherished silver chalice is the one guy who keeps breaking the heart of Alex Ovechkin.

Sidney Crosby has never been that guy.

Fleury has — and as he did while protecting the Penguins’ crease in a couple of victorious Game 7s, “The Flower” will not wilt when attempting to again deny Ovechkin the only hockey goal that matters.

But before he grips that Cup for a fourth time (leaving old friends Crosby and Evgeni Makin to catch up with him), Fleury will get his hands on the Conn Smythe Trophy that is awarded to the most valuable player of a Stanley Cup postseason.

And when those scenes are playing out in Sin City and on screens throughout the True North Strong and Free, the loudest cheers might be heard from our City of Champions, where Fleury’s silvery run with the Golden Knights has replaced the Penguins’ regular Cup chase as a late-spring fling for Pittsburgh’s devout sporting populace.

“One person sent me a message and asked, ‘Why don’t you make a ‘Kunitz Backers’ shirt?’” says Zack D’Ulisse, owner of Pittsburgh Clothing Co., which has offered customers a “Pittsburgh Vegas Backers” t-shirt since the Penguins were eliminated from these hockey playoffs by Ovechkin’s Capitals.

“I told the guy, ‘Uh, nothing against Chris Kunitz, but Fleury is a little different.”

More than a little, Zack.

He is the most genuine professional athlete in our city’s history.

My favorite encounter with this great goalie for whom I have sacrificed journalistic objectivity remains one of our very first. It happened in October 2003, during his first weeks in Pittsburgh, and it says everything about Fleury. At a rink in Castle Shannon, a Penguins employee handed him a black Pirates cap, the one with that familiar yellow (sorry … gold) “P.”

Fleury turned to me and asked, “Penguins?”

Without hesitation, he lifted that cap, pulled it onto his head (stray black hairs creeping out of the sides), rolled back his shoulders and smiled the smile we would all come to love.

He wore that cap basically that way, and somehow maintained that smile in what became hockey’s ultimate pressure-cooking environment, for the next 15 years. Then, about a year ago, the Penguins moved on.

Thing is, Pittsburghers haven’t moved on as quickly.

We need to. All of us. Moving on is a part of life. Can’t really live one if you don’t.

“I’ve seen him maybe at his worst and his best,” says James Neal, a teammate of Fleury's with the Penguins and now the Golden Knights. “But I’ve never seen ‘Flower’ like this.

“No matter what an athlete says, it’s hard to leave a team. I don’t think you ever want to say it’s easy to walk away. It’s always hard. But for a guy who’s been so much to a city and a team, you want your reality to be that you’re wanted. And the last couple of years, can you really say the Penguins wanted him?”

Nobody speaking truthfully about Fleury's long endgame with the Penguins can say that.

“Exactly,” says Neal. “So, when you tell me ‘Marc came to Vegas to prove that he is still a great hockey player, not just a good guy that people love’… well, you’re right, Rob. He’s told me that. And he’s doing that.”

“I think ‘Flower’ will always think of Pittsburgh. But I’m telling you, he’s moved on.”

As he should. As we all should.

As I told him in a text message a few hours after he won the Clarence S. Campbell Bowl for his Golden Knights: “Four more, Marc. Go get Stanley.”

His response: “Thx robrossi, will try my best.”

Didn’t have the heart to tell him that while he authored the last chapter to a storybook season, I will be focusing on City Paper’s coverage of Three Rivers Arts Festival and plans for our upcoming Pride issue.

Marc-Andre Fleury doesn’t belong to Pittsburgh anymore — and deep down, Pittsburghers know this to be true. It’s why since the Penguins’ championship run ended, a flowery love for Vegas’ hockey club has blossomed in Pittsburgh.

We know that guy.

Maybe by following his Final hour, we’re all getting ready to really, truly, finally move on.