Adman: Warhol Before Pop at the Andy Warhol Museum continues through Sept. 2 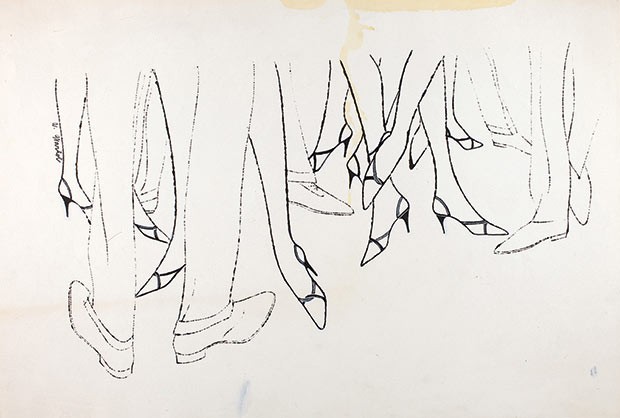 Image courtesy of The Andy Warhol Foundation for the Visual Arts, Inc.
Andy Warhol’s “Men’s and Women’s Legs and Shoes”

The looping layout of the second floor of The Andy Warhol Museum can sometimes feel disorienting.

But in Adman: Warhol Before Pop, it works in the exhibition’s favor by presenting multiple narratives simultaneously. The exhibition, which opened April 27, layers Warhol’s commercial work with his personal life during the 1950s while living in New York City and ends up revealing a more intimate portrait of the artist than expected.

In the outermost walls, snakes mingle with pointy shoes, jazz records, and horoscope illustrations that showcase Warhol’s fanciful line work as an award-winning commercial illustrator. It is here that we see the lesser known processes he implemented, like ink blotting, stamping and marbleizing, which point to the urgency and efficiency he sought, and eventually found through silk-screening later on in his career.

In the innermost chamber, two mockup storefront window displays are on view, adorned with blushing cupids, Valentine’s Day notes and doodle hearts. It’s cute, and impressive the scale Warhol is working at while staying true to his sensibility. That said, this inner chamber presents a false heart.

The real tenderness of Adman lies in the second ring of the exhibition. Here we find sketchbooks of delicately drawn boys, reminiscent of Jean Cocteau in their simplicity. Stamps of stars, butterflies and flowers once used for commissions, now rest on and around these beaux faces. Did Warhol originally craft these stamps for the boys he depicted or for his commercial illustrations?

Also along these walls are handmade books made with his mother and friends, snapshots of his college days and a packed vitrine full of souvenirs from a world trip to Europe and Southeast Asia (with an unrequited lover). It all adds up to create a more sensitive portrait of the artist we all thought we knew.

It is this ring, between ad spaces and storefront windows, where we see just how Warhol successfully breached the harsh, masculine, advertising world of the 1950s. With the commercialization of photography, and bold, graphic design layouts, Warhol’s delicate lines and soft color palettes subverted the printed page. At a time when other artists like Jasper Johns and Robert Rauschenberg went by aliases for their commercial work, Warhol queered these spaces by signing his name and often employed his first studio assistant, his mother, Julia Warhola to write copy.

By fusing craft-based processes with his arguably feminine sensitivity, Warhol brought capital A, Art into the advertising world. Funny how years later, he would smuggle commercial techniques and imagery back into galleries and museums. For every skeptic who’s looked at a soup can or Brillo Box and asked “Why did he make this?” Adman offers an answer.