Greek Gourmet in Squirrel Hill develops its own ice cream

“I’ve tested it not only on vegan customers but on children, who are the harshest critics.” 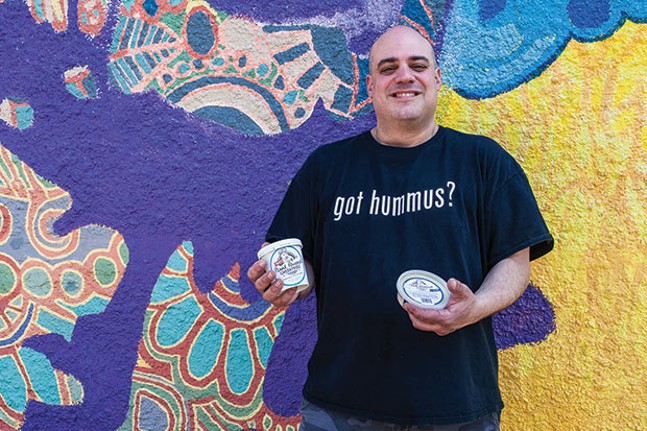 Aquafaba: the hip food that’s been making its rounds through U.S. culinary circles over the last few years. What is it? Well, it’s literal translation from Latin is “bean water.” More specifically, it’s the viscous liquid from canned chickpeas. In a perfect twist of fate, this gag-inducing by-product (for some people, including myself) can be transformed into the airy, tasty delight with a fancy name that vegan dreams are made of. It just takes a little bit of elbow grease.

Aquafaba arrived on the culinary scene in 2015 when Goose Wohlt, a vegan software engineer from Indiana, was trying to make vegan meringues for a seder dinner. His wife mentioned seeing a video of two French chefs using chickpea liquid to achieve fluffiness in a chocolate mousse. He ran with the idea and posted his success on a vegan Facebook group. That’s when aquafaba started to take off. Now, it’s found a place on several menus here in Pittsburgh.

Michael Smalis, owner of The Greek Gourmet, has been practically drowning in aquafaba from doing a brisk hummus business for the past 12 years. He makes hummus for his shop as well as 10 different independent grocery stores, with Whole Foods as his biggest customer.

When he found out that he could use aquafaba instead of throwing it out, he got to work developing a recipe for ice cream. “In the last three or four weeks, I’ve really nailed down the recipe,” says Smalis. Because when it’s whipped, aquafaba mimics the consistency of an egg in the way it can function as a binder and aerator, Smalis was able to closely match the creaminess of ice cream without adding any dairy, nuts, soy or eggs. It comes in chocolate and mint chocolate chip; the flavor is excellent but doesn’t coat your palate the way dairy-based ice creams can. If someone had handed it to this writer without telling her it was aquafaba, I’m not sure if I would have picked out the differences immediately. 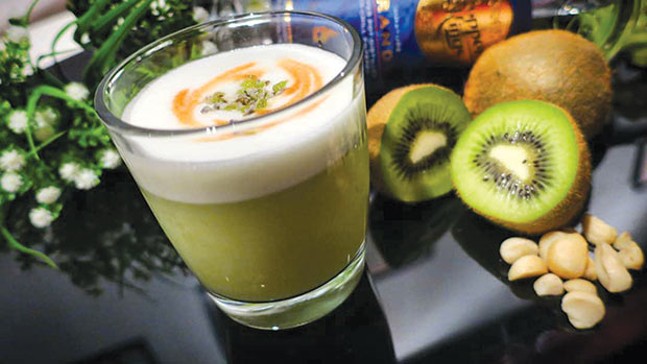 Now, Smalis is ready to sell his ice cream, named Peppi’s Plant Powered GreekFreez, to the East End Co-op and soon to Whole Foods. He named it for his mother, who started the Greek Gourmet and brought Smalis in to help.

GreekFreez clocks in at 372 calories a pint. Compared to Häagen-Dazs’ chocolate pints (910 calories), or Ben and Jerry’s Chocolate Therapy (1,000 calories), that’s very low. About a quarter of GreekFreez’s calories come from fat as opposed to the around half in other traditional ice creams. Fat is not necessarily an enemy but if you’re specifically cutting calories, this an advantage.

“Everybody is trying to trend toward lower-calorie products and lower fat and they are using additives and stabilizers to achieve that,” says Smalis. GreekFreez has six ingredients and uses natural vegan stabilizers like arrowroot, xanthan gum and guar gum. “I’ve tested it not only on vegan customers but on children, who are the harshest critics. And they look at it and say, ‘this is great ice cream.’ If kids can eat it and they like it, then it’s a good market,” says Smalis.

Katie Molchan and Elaina Holko, co-owners of the bar Mixtape in Garfield, learned about aquafaba from a customer comment on one of their social media platforms. “We use it in any drink we would traditionally use egg white in,” says Molchan. Mixtape keeps a menu of speciality drinks as well as classic cocktails. Many of those drinks, like ramos gin fizzes and whiskey sours, utilize egg white to get a foam. Molchan and Holko have discovered that one ounce of aquafaba equals the equivalent of one egg white and that aquafaba actually makes stiffer, longer-lasting foam. They like the texture that even a small amount can bring to a cocktail and the flavor of the drink is unaffected. “The smell and flavor very quickly dissipate with whatever you add to it,” says Molchan.

Molchan and Holko also like that using aquafaba in place of egg whites for all off their drinks means that they don’t have to worry about possible contaminants from using raw eggs for customers that have dairy sensitivities or preferences. “This just works out so much better for us [keeping things clean] since we have a really small bar,” says Molchan.

Chef Scott Walton of Acorn also likes the utility of aquafaba. “I started playing with it about three years ago in desserts. Then I started toward going towards savory with it,” says Walton. He particularly likes it for fish preparations because it holds up while not drowning the delicate flavors that meats like trout can have. “Egg whites go flat on you, especially when you add heat to them. Aquafaba gives you time to work with it,” says Walton.