Is the proposed hyperloop taking the focus away from advancing feasible transit solutions in Pittsburgh? | Pittsburgh City Paper

Is the proposed hyperloop taking the focus away from advancing feasible transit solutions in Pittsburgh?

“So far, all we’ve seen are some hyperbolic press releases with questionable claims and slick renderings.” 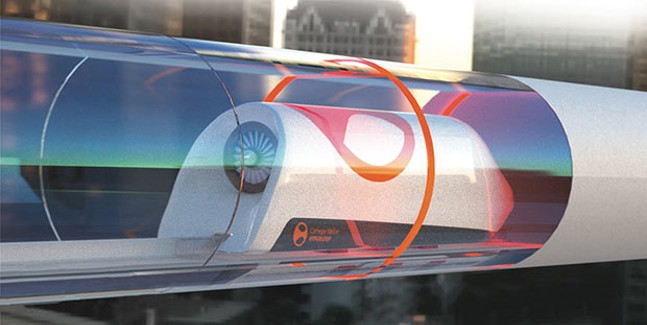 Headlines in the Rust Belt region for the hyperloop, a proposed high-speed pod that promises to shuttle passengers at speeds up to 700 mph, would have readers believe that the futuristic project is already in the works.

A Feb. 22 article in the Pittsburgh Post-Gazette was titled “Proposed hyperloop to Chicago could be in line for federal infrastructure funds.” A Feb. 27 article in the Cleveland Plain-Dealer reads, “Great Lakes Hyperloop consortium sees Cleveland-Chicago link possible in 3 to 5 years.”

The proposed technology would thrust a light-weight pod through a vacuum-sealed tube at near-super-sonic speeds, either above or below ground. The tech company Hyperloop One has said a trip from Pittsburgh to Chicago could take about 30 to 40 minutes. Pittsburgh Mayor Bill Peduto added his own comments on Twitter, speculating just how awesome hyperloop would be for Pittsburgh travelers. “That could mean lunch breaks in Chicago,” he wrote in September 2017.

But Pittsburgh hyperloop dreams could easily remain a fantasy. Although Pittsburgh has been chosen to get a hyperloop station from two different tech companies, fully functional hyperloops don’t actually exist anywhere in the world. Also, the fastest hyperloop tested has only reached top speeds that are a fraction of what the tech companies are claiming is possible. Even local hyperloop engineers, who are giddy about the prospect of seeing hyperloop become a reality, say the technology is years away from being ready.

Transit experts say people should be skeptical of hyperloop’s prospects in Pittsburgh and other Rust Belt cities. They say there are other, more realistic transit and infrastructure projects that deserve support, and hyperloop could be serving as a distraction.

Hyperloop is far from the first futuristic transit proposal to capture the imagination of Pittsburgh. In the 1960s, a remotely operated Sky Bus line was proposed to carry passengers on elevated platforms all throughout Allegheny County. But Sky Bus’ cost and labor concerns eventually killed the project, and busways and light rail were built instead. In the 1990s, a Maglev project from Greensburg to the Pittsburgh International Airport gained momentum and even attracted $28 million in federal funds. The project promised to propel passengers at 250 mph on train-like tracks where cars levitate above super-powerful magnets. In 2011, the company running Pittsburgh’s Maglev went bankrupt.

But these past failures haven’t decreased excitement and support for hyperloop. The Mid-Ohio Regional Planning Commission, a regional-transit coalition supporting the Columbus region, has contributed $2.5 million to a feasibility study for the tech company Hyperloop One’s proposed line connecting Pittsburgh, Columbus and Chicago. Pittsburgh’s regional-transit coalition, the Southwestern Pennsylvania Commission, is also supportive of that proposal. SPC even sent staff to watch Hyperloop One’s competition in Nevada this January, during which engineers tested their hyperloop prototypes in a quarter-mile-long tube to see which pod could travel the fastest.

In March 2017, SPC president James Hassinger sent a letter to Hyperloop One stating that hyperloop in Pittsburgh and beyond would “benefit the entire Midwest and provide new opportunities for the rapid spread of information and expansion of trade among industry leaders.”

David Cole, a Seattle-based architect who has designed transit proposals for cities like Cincinnati and Seattle, says hyperloop isn’t nearly far enough along in implementation to deserve such attention. “I’m highly skeptical,” wrote Cole in an email to Pittsburgh City Paper. “So far, all we’ve seen are some hyperbolic press releases with questionable claims and slick renderings. It hasn’t yet transported a single passenger.”