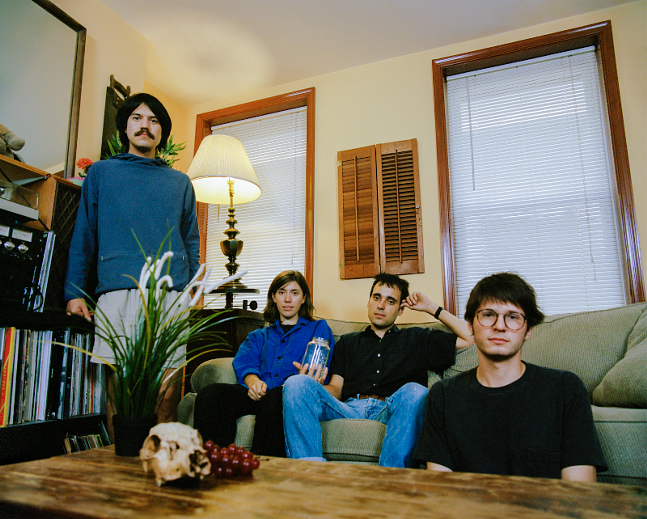 
When City Paper recently called Eve Alpert, she was pulled over on the side of the road to talk on the phone “without being a distracted driver!” The guitarist and vocalist of pysch-pop band Palm was en route to vacuum the van before their latest tour.


Rock Island, the latest Palm record, came out Feb. 9. How does it feel to finally have that body of work out in the open?

It feels longer, maybe because the stream came out a week ago. This is the most excited we’ve been about a release and about the music and recording that we’ve ever been. I’m really happy and very happy with the music.


This is the first time we felt very confident about all the songs we wrote, and we’ve really focused on making a cohesive, unified record. With all our previous releases, they were just the songs we had at the time, so making the songs feel cohesive and whole was always an afterthought, but this time it was an intentional act from the first song we wrote. It was also the first time we’ve had a lot of time to record.


How was the recording and writing process different this time?

We’ve always tracked records live, and done it quickly because of financial restraints, working with whatever resources we have. A studio only had so much time to have us, or we’d only have so much money for a certain amount of days. This time we decided to self-record with an engineer we hired in a house we rented in New York. We had three weeks to record, and it was much more affordable. While we were taking a risk with the [recording] environment, we had so much trust in our engineer to make the space work, it was a real luxury to be living in this house and recording downstairs.


Y’all still live in Philadelphia, right? What makes that city special for you?

Yes, we all live in Philadelphia. We’ve always tried to exist in a place where music can take our full attention, and where we can practice whenever we want. Perhaps it’s harder in cities, in places like New York to have that time because it’s so expensive. Our writing process can be slow and, I don’t know, there’s a lot of bands [in Philadelphia] I’m really inspired by, so we’re just lucky enough to have a lot more time and space to craft songs.


Who are some of the Philly bands you’re really into?

I really like the music of Ada Babar, they’re an Atlanta-transplant, and I love everything they do. I like this musical project called NAH, it’s an experimental drummer who does noise drums and raps, it’s really cool. I like this band called Old Navy, which has members of Palberta in it. There’s always people, there are so many house shows, there are a lot of opportunities to see people taking chances and risks, and it’s great to see music very often in non-sterile environments. Body Meat, they live in Philly, Pamela and Her Sons, an electronic producer now in Philly, she’s really great.


Rock Island has all sorts of unique sounds, but it’s a record absent of synths. Could you speak to the decision to use guitars and drums with MIDI triggers that make them sound like another instrument entirely?


In several early interviews, a big point stressed by interviewers is your lack of traditional music education, a kind of self-taught attitude. But the music you make is challenging and sounds incredibly technical, so how did your sound develop?

That’s become a very big talking point, it was just sort of one thing that we said at one point that stuck. We all just sort of came together as new, young curious musicians. We just kind of learned to play music together. So we taught ourselves how to play the instruments by experimenting as a group. Hugo hadn’t really been a drummer before, and I had never been in a band playing guitar. It was our brains and our dynamics which informed our sound.


You definitely make music that incorporates unique and challenging rhythms and sounds, so the music is attractive to music nerds, but Palm is composed of music enthusiasts who come from a non-academic approach. Is that ever weird?

I don’t know anything about math rock or the technicalities of that broad umbrella term, I’m not super into ... well, our intention is not to be complicated for the sake of it, and I have trouble connecting with people who think what we are doing is us talking in numbers. We’re simply trying to arrange, make interesting music that’s also poppy, but also disorienting at the same time.


I love the [music] nerds, but I don’t have much to say about the technical side of music-making. It’s very much feeling it out with the group in the basement, and just like, it’s hard for me to talk about it, because some people see it as wizard-like sounds, but we’re just trying to have fun.


I hope we’re engaging everyone, and I think we just want to disorient the listener, but we want to make music that is pop at its core, but is sort of uncomfortable for the genre.


Within the first few days of being released, a bunch of people were commenting on the posts about the record being amped that “Heavy Lifting” was on it. What was that about it?

We have always had a tendency to play new songs that have not been released before we recorded them, so we’ve been playing a lot of this record for the last year to year and a half live, and so maybe that’s just a song people liked when we play it live. It’s got a very long second half that feels like maybe it’s the danciest bit in our set, and the most like groovy or something. But I guess people just took our setlist or asked us what that song was called.


Do you often work through new stuff live before it gets recorded?

It’s important for us to play new songs when we’re touring so we can think about how to make them better when get home, feel out how they sound and where they should go.


What will you be playing on this tour?

We will be playing mostly the [new] record, and maybe a song that we haven’t ever played from the record and maybe a new thing too, but this week before we go out we’re making sure we’re prepared to do that.


How long was this recording and writing process before the release?


We work very slowly and tinker over the music for a long time traditionally. I would love to write faster in the future and have a lot more material to sift through, but it sort of works with our process. We’re a completely democratic band, we love being like democratic and writing everything together. The downside is that we work a little bit slower.


We all trust each other so much, and for this sort of project I couldn’t imagine it any other way. We love each other’s input. I’m sure there’ll be songs [where] someone has a full-fleshed out idea, like “Swimmer” was kind of like that. Kasra wrote that song, but as a whole it’s way more rewarding when we’re all piecing it together, together.


What songs are you most excited to play live?

“Color Code,” I would say. I was really happy with how it came out, and I’m excited to play it more. We incorporate some newer sounds that stay true to the record, and it’s just fun. I’m really pleased with that song. I also really like the song “Swimmer” that Kasra wrote.


I’m excited to play with IT IT in Pittsburgh again.


They definitely are a band that works similarly to Palm, grooving it out in a shared basement when they write.

You can feel that when you see them play.