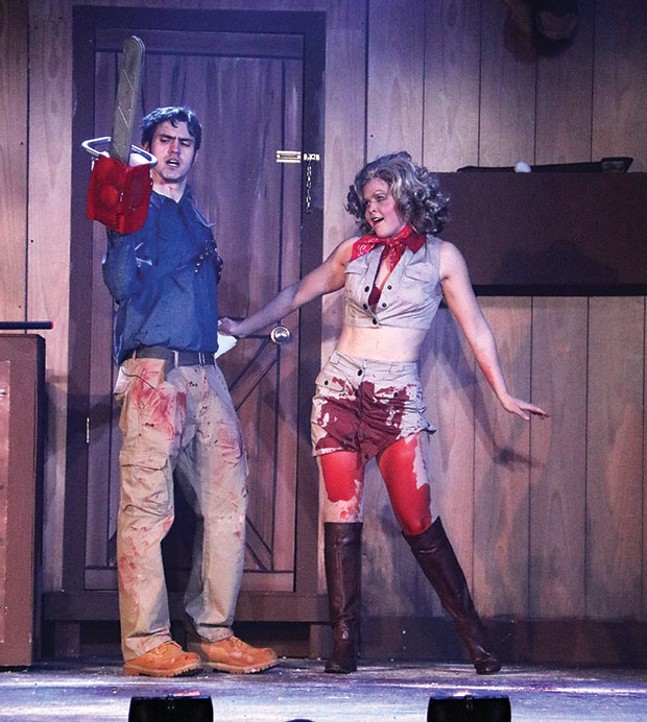 If Blackfish turned you off from SeaWorld for good, and you never had the opportunity to check out Gallagher and his watermelons, I’d recommend sitting in the splash-zone of Evil Dead: The Musical, staged by Pittsburgh Musical Theater.

As in the Evil Dead film franchise, this production is generous with fake blood, and attendees in the designated first few rows get a particularly immersive experience. It’s not for the squeamish, but it’s all so campy, fun and absurd that it’s pretty easy to stomach. (Sitting in the splash-zone is voluntary.)

The first iteration of Evil Dead: The Musical premiered in Toronto in 2003, with book and lyrics by George Reinblatt, and co-composing credits for Christopher Bond, Frank Cipolla and Melissa Morris. The title pretty much says it all: The plot is assembled from storylines from the Evil Dead film series (The Evil Dead, Evil Dead 2 and Army of Darkness) and accompanied with exaggerated Broadway-style numbers to narrate.

Musically, the production is a little forgettable. The tropes of outsized Broadway musicals are imitated so well that they kind of stoop to their level. And while the humor and shock value of combining sugary melodies to deliver vulgar lyrics might have felt revelatory when the show debuted, it feels a little stale these days. It doesn’t end up mattering much, though. The cast sells the play’s strengths and overcomes its weaknesses simply by having as much fun on stage as a story this ridiculous deserves. Try the splash-zone: Ponchos are available on site.