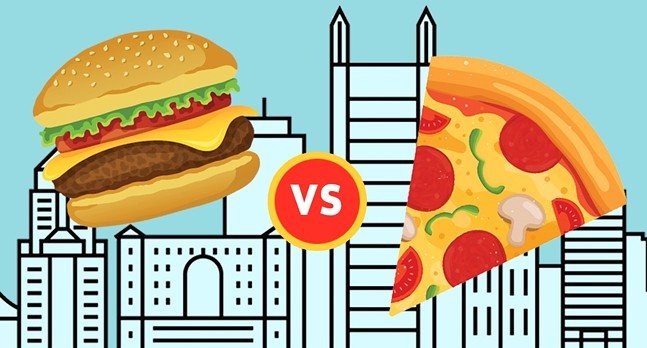 Everyone knows the most iconic Pittsburgh foods are pierogies and sandwiches with fries stuffed inside. If people are visiting the Steel City, they need to try some church pierogies and a Primanti’s sandwich; they’re Pittsburgh rights of passage.

But Pittsburgers don’t eat these famous foods the most often compared to other popular foods. According to new data released by Google News Lab, Pittsburgh is like most Rust Belt cities in its most-frequented restaurant choices: We like pizza and we like burgers.


And while Pittsburgh’s burger ranking is higher than its pizza ranking, when you factor in the entire Pittsburgh metro area (Allegheny, Armstrong, Beaver, Butler, Fayette, Washington and Westmoreland counties), pizza is preferred in four of the seven counties. Ironically, Fayette County, where the Big Mac was created at a Uniontown McDonald’s, prefers pizza over burgers. (Shout out to Greene County, which is technically out of the Pittsburgh metro area, but is the only county in the state that visits Mexican restaurants above all other establishments. Viva Greene County!)

But with burgers being preferred in counties that represent a far greater share of the region's population (Allegheny, Butler and Westmoreland), the legendary American creation of a ground-beef patty on a bun appears to attract a larger volume of Pittsburghers out to restaurants. This makes some sense, as burger joints, like Burgatory and BRGR, have been expanding to new locations all over the region over the last several years. And fancy burgers have also become staples on menus at most gastropubs in the area.

Using this data, Pittsburgh City Paper’s assessment is that Pittsburghers do, in fact, prefer burgers over pizza. But not by a large enough margin to declare Pittsburgh as a burger-dominated town. Pittsburgh can have its burgers, and eat its pizza too.