Is Pittsburgh’s rental market a good fit for Amazon?

Rental prices appear to be adjusting away from expensive units, even as city officials are hoping to attract a company that would increase demand for high-end dwellings 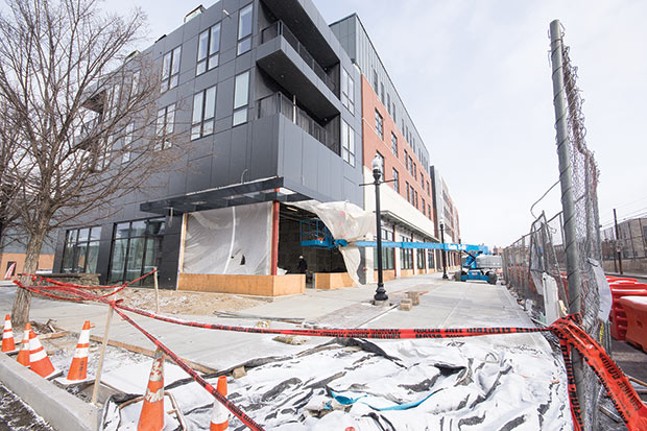 CP photo by Jake Mysliwczyk
The Arsenal 201 apartment complex in Lawrenceville is set to open soon, even as demand for high-end rentals is dipping.

A recent report by Washington, D.C.-based real-estate research firm CoStar confirmed what many have been saying about Pittsburgh’s recent apartment boom: There are too many new, high-end apartments in the city.

CoStar found that the vacancy rate at the apartment buildings that opened in Pittsburgh 2017 was close to 40 percent. CoStar analyst Ben Atwood says there is low demand to fill newer apartment units, which tend to cater to high-income clientele.

“It is a softening across the metro,” says Atwood of the new, luxury-style units. “There are some that are doing well, but as a group, they are struggling to reach occupancy.”

Currently, Pittsburgh officials are busy courting tech-giant Amazon, which could bring 50,000 well-paying jobs to the region if Amazon chooses Pittsburgh for its proposed second headquarters. Economic-policy experts say that potential Amazon employees will be looking for more high-end units in Pittsburgh, and rents will rise across the region.

At the same time, Pittsburgh’s current rental market is showing a need for more moderately priced units, meaning those who already live here are driving demand in a different direction.

This begs some questions. Is the city’s housing market actually a good fit for Amazon? If Pittsburgh were to land Amazon, would that benefit current Pittsburgh residents? City officials believe Pittsburgh is a great fit.

But policy experts see the housing market as a major obstacle for Pittsburgh in landing Amazon, and believe that if Amazon were to pick Pittsburgh, it would likely add intense pressure to rental markets and drive up prices. And everyone seems to agree, Pittsburgh’s rental and housing markets are in for some changes, especially if Amazon comes to town.

CoStar analyst Atwood says, “I have written the equivalent to a Game of Thrones-length book about [housing markets] in cities like Pittsburgh. And if Amazon comes, I throw all of that out the window.”

Atwood says that Pittsburgh’s low rents relative to other cities is a factor in its chances for landing Amazon. According to apartment-aggregating website Apartment List, the January 2018 median price for a two-bedroom unit in Pittsburgh is $910. That’s more than $200 cheaper than Atlanta and $600 less than Washington, D.C. (All three cities are finalists for Amazon’s proposed second headquarters).

“I think it would be an advantage,” says Atwood. “Pittsburgh is likely in the running because of the low pricing.”

But he says the high vacancy rates at new apartment buildings indicate that the city isn’t seeing the type of growth that Amazon might be looking for.

He says Columbus, Ohio, has excelled recently in growing the type of educated, young workforce that fills new apartment complexes — the same kind of workforce Amazon is trying to recruit. “Columbus is doing really well filling those types of units,” says Atwood. “They have a real solid economic base, and the kids graduating at Ohio State University are staying and finding work. A positive-feedback loop is forming. They are filling up their inventory really quickly and nicely.”

Atwood says Pittsburgh’s failure to fill its newer apartment units could be an indication that the city’s economy has not taken off as much as investors, like apartment developers, have assumed it might. Atwood says it looks a bit alarming that there are still more high-end housing projects coming online in 2018, such as in Lawrenceville and Oakland. But he says potential growth of tech could boost Pittsburgh’s economy, and have a positive effect on the overall housing market.

“There are reasons to be optimistic,” says Atwood. “I wouldn’t say Pittsburgh housing is in a doom-and-gloom phase.”

Tom Cummings, of Pittsburgh’s Urban Redevelopment Authority, says the vacancies at new apartment buildings could mean the housing market is going through a correction after a boom of new high-end units. “It could just be adjustment,” says Cummings. “I don’t think it is necessarily a bad thing. And it could help to moderate rent increases throughout the city.”

Cummings wouldn’t comment on how the vacancies could affect Pittsburgh’s chances of landing Amazon, but he did say that other outside investors “have already seen the values of the Pittsburgh real-estate market,” and he expects more to follow.

Rick Swartz, of the Bloomfield-Garfield Association, a community-development group, believes high-vacancy rates at the new developments could encourage more developers to build more affordable housing. But he says the city would still need many more moderately priced units, especially in Pittsburgh’s East End, to take pressure off the older-unit housing market, which is currently experiencing a very low vacancy rate.

“What I think will continue to happen is more upward pressure on rental rates for apartments in older buildings in the East End, because there is such a wide separation that remains between the rates on older apartments and what the developers of these newer projects are charging for their units,” wrote Swartz in an email to City Paper.

But the Brookings Institute, a nonpartisan think tank based in Washington, D.C., says Pittsburgh will need a large amount of new, high-end units to compete for Amazon.

The Brookings Institute wrote a January report analyzing the housing markets of the 20 cities selected as finalists for Amazon’s second headquarters, also called Amazon HQ2. Brookings’ Jenny Schuetz authored that report and says in an interview with CP that Pittsburgh’s housing market benefits from being cheaper than other cities and having more supply. However, overall, older Rust Belt cities like Pittsburgh have a disadvantage since the majority of their housing stock is filled with older buildings, many of which have not been renovated. Schuetz says that Amazon employees will likely be looking for newer and “shinier” units.

“The charm of the Pittsburghs and the Phillys is their lower-density row house neighborhoods,” says Schuetz. “If that is not a selling point for the workers, then that is a mismatch.”

Schuetz acknowledges that Pittsburgh’s vacancy rates at high-end apartment complexes could make Pittsburgh slightly more attractive to Amazon, but says those vacancies dwarf the amount of new units that would still be needed to accommodate up to 50,000 Amazon employees.

And if Pittsburgh did happen to land Amazon, Schuetz says the employees would flock to the trendy neighborhoods, and housing prices there would rise. “It’s hard to imagine a scenario without upward pressure on pricing,” says Schuetz. “They are going to view even the richest Pittsburgh neighborhoods as a bargain. The Amazon workers would take over the nicer neighborhoods.”

But part of the reason Pittsburgh officials want Amazon is so the company can help improve the entire region, not just the trendy neighborhoods. “We want to address affordable housing before it becomes a crisis,” said Pittsburgh Mayor Bill Peduto in a January interview with the tech news site GeekWire. “We want to be able to address accessibility and mobility before the development occurs, and we want to be able to show Amazon that, by coming into a region, they can benefit the entire community and not just a single bottom line.”

Peduto also told GeekWire that he is looking to partner with Amazon and that he feels Amazon’s CEO Jeff Bezos would value the “community” if he chooses Pittsburgh.

Representatives from the city did not respond to questions about how the state of Pittsburgh’s housing market affects the city’s chances at getting Amazon to set up here.

Chris Briem, an economist at University of Pittsburgh’s Center for Social and Urban Research, says Amazon could have wide-ranging effects on Pittsburgh. In an email to CP, he writes that if Amazon moves in, the city could finally see significant population and job growth. Briem writes that despite all the talk about an economy on the rebound and “all the changes people are talking about, the [total] population and job count within the city proper is pretty flat.”

Overall, Briem sees the pros and cons of Amazon’s potential effects on the housing market. “Amazon may clearly see local housing prices as a plus, but if they really look into it, they would have to conclude they would spur a fair bit of housing-cost inflation,” writes Briem. “That being said, we have so far to go before we reach average prices in a lot of other regions, [so] it still works out.”