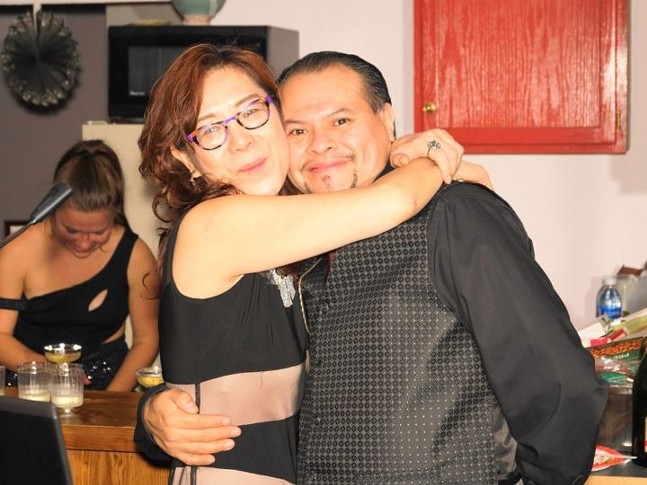 Photo courtesy of YouCaring
Vicente Sandoval (right)
On Jan. 11, U.S. Immigration and Customs Enforcement (ICE) officials visited the Union Grill in Oakland and detained an undocumented immigrant. A statement from ICE reads, “officers conducted a targeted enforcement operation in the Oakland area, resulting in the apprehension of a subject at the Union Grill at 413 S Craig St. Pittsburgh, PA.”

That day, Pittsburgh City Paper talked to more than a dozen workers at several different establishments on Craig St. Many didn’t know that ICE was ever in the area. Some mentioned rumors that ICE had visited multiple restaurants and detained multiple people. No one at Union Grill would speak to CP, and no one in the area said they saw anyone being detained.

The story of this detained immigrant seemed destined to be forgotten, like those of many of the immigrants who have been taken by ICE and eventually deported from the U.S.

But the man taken by ICE, Vicente Sandoval, has considerable support. His advocates want to tell his story and fight to keep him in Pittsburgh. Sandoval, 47, is an undocumented immigrant from Mexico who has lived in Pittsburgh for more than 12 years. Throughout his time here, he has worked as a chef/cook and has volunteered his free time to support the Latin dance community.

Sandoval is well known in Pittsburgh’s small but growing Latino community. He has been the go-to DJ for Garfield’s Los Sabrosos Dance Company for the last few years, and goes by the moniker “DJ Pirata, el chef de la salsa.”  He has no criminal record in Allegheny, Beaver or Westmoreland counties.

Sandoval may have a case to avoid deportation. Sandoval’s lawyer, Peter Rogers, claims he was taken in a case of mistaken identity, likely without a warrant, and that Sandoval was likely not the target of ICE’s operation in Oakland.

Following his arrest, says Rogers, Sandoval went with ICE willingly, even though Sandoval might have had the right to refuse ICE’s request. “Did he have a legal right potentially to not comply?” says Rogers. “Yes, potentially.”

According to Rogers, after being picked up on Jan. 11, Sandoval was initially taken to the Beaver County Jail. He is now being held in York County Prison, the state’s unofficial ICE detainee hub and deportation center.

“It’s my understanding that this was a mistaken identity,” says Rogers. “To my knowledge, [Sandoval] was not the target.” Rogers adds that it’s “likely that ICE did not have a warrant.”

ICE refuted this claim in a statement sent to CP from ICE officials at the Philadelphia field office. “U.S. Immigration and Customs Enforcement deportation officers do not conduct sweeps or raids that target aliens indiscriminately,” reads the statement. “ICE’s enforcement actions are targeted and lead driven. ICE conducts targeted immigration enforcement in compliance with federal law and agency policy. All enforcement activities are conducted with the same level of professionalism and respect that ICE officers exhibit every day.”

But Golnaz Fakhimi, an immigrant-rights attorney with American Civil Liberties Union in Pennsylvania, says that it's now typical for ICE to undertake arrests that “may not be legally sound.”

“The bottom line is that ICE can’t go on fishing expeditions, not at 7-11’s and not at restaurants,” says Fakhimi, referring to the large-scale raids that ICE performed across the country at dozens of 7-11 convenience stores. “And we need to educate people about what their rights are, especially when they are in public.”

And with all these potential violations about how Sandoval was detained, Rogers says, Sandoval has a strong defense. “I do think that he has defenses to be presented,” says Rogers. “I would hope that he has a pretty good chance to be released. Certainly under the previous administration, [Sandoval] was in no way an enforcement priority.”

Rogers says that Sandoval has been charged as an “alien present in the United States without being admitted or paroled.” This is typically a misdemeanor federal offense, and under President Barack Obama's administration, this offense wasn't a priority for deportation.

But President Donald Trump's administration changed the priorities, and now any undocumented immigrant, except for people with valid Deferred Action for Childhood Arrivals (DACA) paperwork, can be deported.

Regardless of the Trump administration's priorities, Nicolette Pawlowski, of Los Sabrosos Dance Company, says Sandoval poses no threat to the community and he has been only a positive force in the city.

“This idea that deporting people like Vicente is creating safer communities is BS,” says Pawlowski. “[ICE] is just rooting out everyone everywhere. We are all Americans.”

Sandoval's immigration hearing is set for early February. Los Sabrosos is holding a salsa night on Jan. 27 to write letters and gather donations in support of Sandoval. His supporters feel that if they show enough proof of his value to the community, Sandoval can return home.

Pawlowski says that Sandoval has become irreplaceable to her company and the Pittsburgh community. “[Sandoval] has been an incredible asset,” says Pawlowski. “He has been pivotal in helping with the largest Latin-dance events in the city. He helps with cooking and emceeing. He is such a pivotal part of our community.”

Agustin Garcia lives in Beechview and has been friends with Sandoval for about a decade. He says that Pittsburgh’s Latino community would take a hit if Sandoval were to be deported.

“[Sandoval] is a great person and he has helped us put on nonprofit events and events for the dance community,” says Garcia. “He gives his time for us. Always cooking for people who visit from out of town. We don’t even have to ask him. For the Latino community, he is always willing to help people.”

Garcia says Sandoval has a great work ethic and never shirks responsibility. Garcia says that even though Sandoval entered the country illegally, he has proven himself to be a model citizen. He says immigrants like Sandoval should be given a chance to stay in the U.S.

“It’s not just him, there are a lot of people like him,” says Garcia. “They should be given a chance to prove themselves. [Sandoval] has shown he is doing something good for community, we should say, ‘Let's give him a chance.’”

The benefit for Sandoval is being held at 4909 Penn Ave., in Garfield, starting at 9:30 p.m. on Jan. 27. Sandoval's advocates have also started a YouCaring page to gather donations.