In 2013, Pittsburgh Post-Gazette publisher John Robinson Block said people of color needed to pull themselves up 'by their bootstraps,' according to one of his own papers | Pittsburgh City Paper 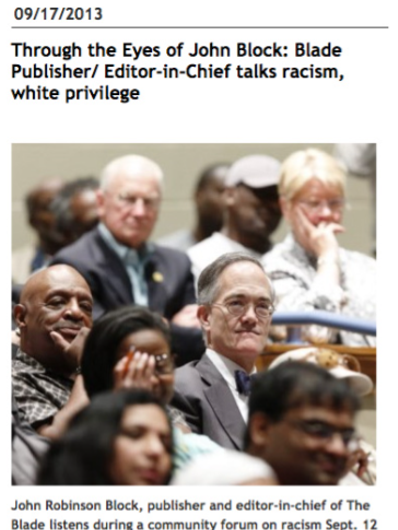 In 2013, Martinez, who worked at the Blade for two years as a reporter, spoke to Block following a community forum that was co-sponsored by the paper. He was sitting beside Block when he asked for an interview after the event. Block obliged, although Martinez says several senior editors tried to convince Block not to do the interview because they worried what he might say. Block honored his commitment, and the story that Martinez wrote following the meeting gives a lot of insight into Block's views on race.

"I will give John  credit for doing the interview and then allowing it to run, despite other editors wanting to kill it," Martinez tells CP. "John Block lives in a much different world than most of us. I think he can't understand why people are offended by these opinions. He comes from a world where his word is law and he's not used to being questioned. He's a lot like Trump in that way.

"Don't get me wrong, intellectually he's a very smart man. [But] when it comes to race relations, he's clueless. Friends of mine from Toledo brought this most recent editorial to my attention. It has people asking the question, 'Is John Block racist?' Of course he's racist, the proof is in the pudding. Does John Block think he's a racist. Honestly, I don't think he cares."

The P-G, particularly the paper's editorials, has taken more of a right-leaning turn in recent years. And more than that, some of the content has come off as either hateful or lacking an understanding of what non-white/non-heterosexual Americans go through. Last year, the paper did what many people, including some staffers, say was a non-endorsement endorsement of then-candidate Donald Trump. Then, there was a piece in 2015 by then-columnist Jennifer Graham that was truly a hateful, flippant column entitled "Caitlyn Jenner is still a mister.” (Graham has since left the paper.)

As a news-gathering agency, the P-G is top-notch. The veracity and non-bias of its reporting is beyond reproach. However, editorials like the one on Monday reflect on the entire paper. The editorial is believed to be Block's creation because the Block family's other paper, the Blade, carried the exact same piece on Sunday, the day before the P-G.

The editorial has left many across the region questioning why the newspaper would run the piece. Given some of Block’s past interactions and the editorial board’s writings, it does appear Block has a fondness for Trump. Block spent time in a “more than memorable” meeting on Trump’s plane before the election in 2016, according to a tweet Block posted.

In the story,  Martinez interviewed Block during a forum on the issue of institutional racism that was sponsored by the Toledo Community Coalition and the Blade. The writer asked Block “if I could interview him about his thoughts on racism and what it’s like being a wealthy white male, whose life is filled with many privileges,” he says.

Martinez says the paper decided to hold the forum to "improve its image with the minority community." That image, he says, was on the negative side because of other editorials on the topic that "came across as very racist."

For the story, Martinez asked Block pointed questions like: “Tonight there was a great deal of talk about depths of poverty, that let's be honest, you probably can’t even fathom. What did you get out of this forum?"

“There were some things brought up that I didn’t understand; that are hard to relate to. ... I didn’t agree with everything that was said,” Mr. Block continued. “Whatever the truth is, which is very different in a white man’s eyes than a black man’s eyes, it needs to be dealt with at an individual level.”

He elaborated by pointing out that forums are a good starting point to begin discussing issues, but ultimately individuals must do their own soul-searching and decide whether they believe they are racist or are willing to change their behavior.


Earlier in 2013, the Blade wrote a series of stories about Toledo’s gang issue. Block told Martinez: “Getting gangs off the streets is paramount, even if that means incarcerating some,” he said. “It’s not helpful to let kids get off when they do something wrong. It’s not about making excuses, but about ending the threat.”

Following that quote, Martinez revealed that Block said he was bothered that people of color often describe themselves, or are described by others as “victims.” That then led to this exchange between Block and Martinez:

"We can’t continue to blame everyone else for our problems and have a victimization outlook,” he said. “People are responsible for their own lives.”

He suggested that people of color need to do what people did back in the “old days” and pull themselves up “by their bootstraps.”

I then asked Mr. Block if he was concerned that his comments might be construed as offensive or racist.

“I’m not concerned about saying things to make people unhappy,” he replied.

Fair enough, I responded. I posed the question a different way.

He paused for a moment, thinking about our conversation. He then acknowledged that the words he had spoken didn’t clearly explain his primary point.

“My point is we need to get the gangs off the street and try to get these kids in school,” he said. “I want to see them in school, become successful and have a stake in the system.”


When asked if racism could be “eradicated” in America, Martinez writes that Block didn’t “directly answer the question." Martinez wrote: “He said racism is a difficult problem to deal with, in Toledo and in America, adding, ‘You can’t pass any laws that stop people from what they feel inside,’ but said, ‘We can make overt acts of racism illegal. You can pass a law that prevents them from acting on it.’"

The piece ended with Block telling Martinez that a newspaper can’t merely report the problems in the community, but should also, in Martinez’s words, “take a lead role in helping to find solutions to those problem.” Block further insisted that he’s not a  “bleeding heart.” Martinez wrote that most people don’t get a glimpse of Block’s “compassionate side.”

Martinez ended the piece by describing how Block became “touched” by the story of one gang member in the Blade’s series and wanted to help her after she got out of prison, even potentially “providing her with security in case gang members came looking for her.”

"It was then that he realized the scope of the problem, he said. Helping just one person does nothing to solve the long-term problems that encourage youth to join gangs. That's why forums on racism and planned follow-up efforts are so important, he said. It has the potential to bring a community together and save itself."