After back-to-back mediocre seasons, the Pittsburgh Riverhounds are shaking things up for 2018 | Pittsburgh City Paper

After back-to-back mediocre seasons, the Pittsburgh Riverhounds are shaking things up for 2018

“Anytime you can bring in a coach who has won championships at this level, it is a good thing.” 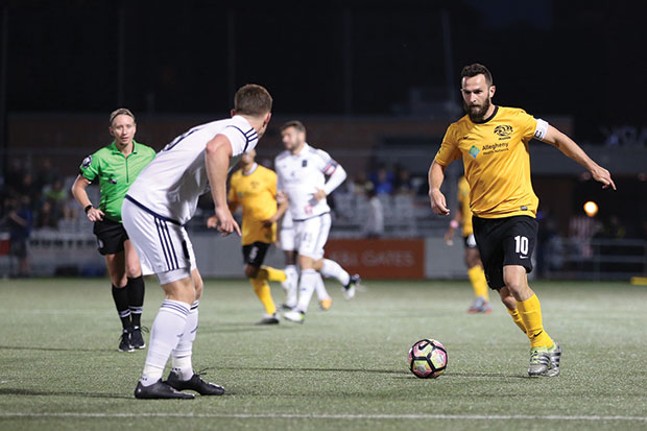 Don’t expect to see the same Pittsburgh Riverhounds come 2018. Pittsburgh’s professional soccer team is undergoing some pretty dramatic changes this offseason, including a new head coach, the loss of the team’s leading scorer, and adding 2,000 seats in a stadium expansion.

This is good news for those who follow soccer in Pittsburgh closely, as the Riverhounds have seen better days. Last year, the team missed the United Soccer League playoffs for the second straight year, and the offseason lacked drama.

That’s not the case with this offseason. There have already been several exciting moments, with more on the horizon. Head coach Dave Brandt was let go after more than a year with the Hounds. Riverhounds General Manager Kevin Johnston says the decision to release Brandt wasn’t personal; Brandt simply did not have the proper licensing to qualify as a USL Division 2 coach.

“Dave was not A-licensed, and so we had to make the change,” says Johnston. “We like Dave and I think Dave can be a great coach.”

In January, U.S. Soccer promoted the USL, which includes the Riverhounds, to Division 2 status. (USL was previously in Division 3.) But the change meant the Hounds needed an A-licensed coach, and they also needed to expand the seating at Highmark Stadium, near South Side’s Station Square.

Luckily for the Riverhounds, the Rochester Rhinos had some financial trouble and are currently on hiatus from the USL. This meant Rochester’s coach, Bob Lilley, needed a job, and the Riverhounds were happy to oblige.

Lilley won a USL championship with Rochester in 2015, and during two separate stints as head coach there, the Rhinos were extremely successful. “This is huge; he has never missed the playoffs,” says Johnston. “He is a proven winner, and we hope that he continues that with the Riverhounds.”

In addition to bringing a pedigree of winning to Pittsburgh, says local soccer writer John Krysinsky, Lilley will likely contribute his own flair to the offseason process of filling in the team’s roster.

“Anytime you can bring in a coach who has won championships at this level, it is a good thing,” says Krysinsky. “[Lilley] just knows how to get things done. I spent an hour-and-a-half just talking shop with him; he has a plan and he really knows what he is doing.”

The Riverhounds’ star player, Corey Hertzog, signed with St. Louis this year, but Krysinsky notes the return of team captain Kevin Kerr and the re-signing of forward Romeo Parkes as bright spots. Also, there are plenty of roster changes still to come, as many spots remain open.

Krysinsky says the 2018 Riverhounds will be focused on defense first and foremost. It’s this area where Krysinsky expects Lilley and Johnston to be creative in signing defensive-minded players. Krysinsky is optimistic about the Riverhounds’ future because of the team’s strong youth-development affiliations.

K.C. McElroy writes about soccer in the Pittsburgh region for his Golden Triangle Soccer Weekly newsletter. He hopes the offseason excitement will translate into more fans enjoying professional soccer in the Steel City.

“The fans’ devotion would go a long [way] to improving the team,” says McElroy. “People love soccer, and fans that love soccer need to support the team.”

McElroy too is optimistic about the Riverhounds’ chances next season, and expects the team to “get back into the playoffs.” He also thinks the expansion of Highmark Stadium will make watching games more exciting.

Johnston is also hopeful the changes to Highmark will bring more fans to games and events. However, he acknowledges that in the Pittsburgh sports world, just showing up is not enough to keep spectators satisfied.

“Pittsburgh is a winning city. If we do that, then I think we are going to be OK,” says Johnston.

The Riverhounds’ season kicks off in March. Fans can stay informed on the latest team analysis and news by reading Krysinsky’s blog, Pittsburgh Soccer Report, at pittsburghsoccerreport.com, and can sign up for McElroy’s newsletter at goldentrianglesoccerweekly.com.