Since President Donald Trump’s election, a grassroots uprising has grown in all corners of the Pittsburgh region, and women are leading the charge. | Pittsburgh City Paper

Since President Donald Trump’s election, a grassroots uprising has grown in all corners of the Pittsburgh region, and women are leading the charge.

“I do think we will see a change as women step up.” 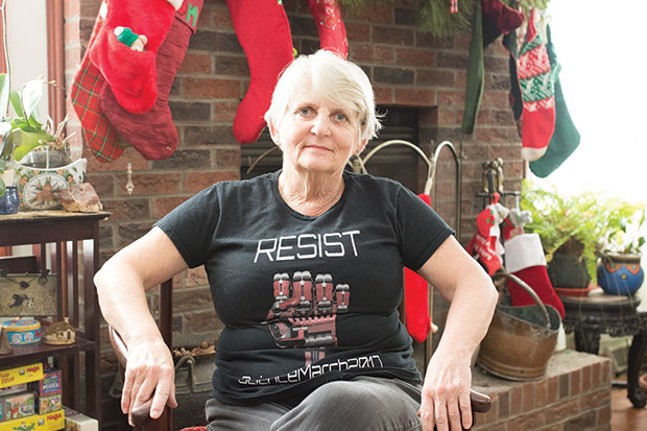 About 11 months after the election of President Donald Trump, Kitty Lagorio, of Peters Township in Washington County, finally found her mission. Lagorio, a lifelong Democrat, was dismayed by the 2016 election results. She looked inward; she blamed herself and her party for Hillary Clinton’s defeat.

For weeks, Lagorio was depressed, but when some pissed-off suburban women started to organize in Pittsburgh’s South Hills, she dusted herself off and joined the fight. Mondays with Murphy, a protest group to hold then-U.S. Rep. Tim Murphy (R-Upper St. Clair) accountable, formed in early 2017 when Mount Lebanon resident Lynne Hughes organized the group’s first meeting.

“After the election, and when I was finally able to speak again, I went to Lynne Hughes’ event, and encountered several women there,” says Lagorio. “I just knew that I had to do something. One of the first days of Mondays with Murphy, I was just so angry. My mother went to jail in Germany for cursing Hitler, and so I made a sign saying ‘Damn you Trump.’”

Lagiorio is one of thousands of women who have been on the frontline of the resistance since Trump was elected. These women have channeled their anger into proactive solutions and disruptive actions, and they’re seeing results.

In addition to protesting Murphy, who resigned in October following an adultery scandal, Lagorio found another cause to direct her efforts toward.

Washington County Magisterial Judge James Ellis announced his retirement on March 7, the final day that filing petitions were due to run for his soon-to-be vacated seat. It was later discovered that the only candidate to file papers to run, Jacob Machel, had extensive ties to Ellis. Machel also had little legal experience and worked as a commercial real-estate broker.

Lagiorio describes the move as “entrenched politics at its worst.”

Critics saw the situation as such a subversion of the voting process that a Peters lawyer, Michael Petit, switched his party affiliation from Democrat to independent to challenge Machel in the general election. Grassroots groups formed to support Petit, and even the Peters Township Republican Party backed him. But since Machel received both the Democratic and Republican nominations after the primary election in May, Petit had an uphill battle.

This is where women like Lagorio came in. She knocked on more than 100 doors in Peters and mailed out more than 40 letters to potential voters. Her goal was to let people know that there was a more qualified candidate running as an independent in the magisterial race.

“Let’s face it, I got lazy,” says Lagorio of her attitude in the run-up to Trump’s election in 2016. “But then I found out what I can do for Peters Township.”

It worked. Petit won the election by about 700 votes. And Lagorio believes her personal engagement made a difference. “People told me, ‘I have been a Democrat all my life, and this is the first time someone has come to my house to ask me to vote,’” says Lagorio.

Hughes, of Mondays with Murphy, now called Progress 18 PA, believes the Pittsburgh-area resistance movement isn’t just a reaction; she feels a community of engaged voters is forming and growing. “There’s been some hiccups, mostly communication and learning how to work as a group, but I am genuinely in love with all the people I’ve met since January,” wrote Hughes in a text message to Pittsburgh City Paper.

And Progress 18 PA isn’t the only women-led group aimed at resisting Republican political efforts. PA 12 for Progress is led by North Hills residents Linda Bishop and Stacey Vernallis, and the group has held many protests against U.S. Rep. Keith Rothfus (R-Sewickley). Other Rothfus resistance groups led by women include Indivisible Johnstown and Southwest PA NOW, a branch of the National Organization for Women. The Pennsylvania 12th Congressional District chapter of the Progressive Democrats of America is also led by a woman, Tina Shannon, and the group has held multiple events calling on Rothfus to hold a town hall.

The Pittsburgh branch of Tuesdays with Toomey, a group organized to influence Sen. Pat Toomey (R-Lehigh), is organized by women like Jill Helbling and others. TwT has gathered crowds as large as 300, and still holds protests weekly.

The Pittsburgh-based Black Brilliance Collective, run by women like Ciora Thomas and Diarra Clark, has held marches with hundreds of attendees in response to the white-supremacy events in Charlottesville, Va., and Trump’s inauguration.

Pittsburgh’s Women’s March, which gathered thousands of marchers in Downtown Pittsburgh in January, was another event organized by local women, including tireless work from organizers like Tracy Baton. And this doesn’t begin to encapsulate the many local women-lead efforts.

“There seems to be resentment towards women among the current administration. I think Trump’s attitude toward women is motivating women,” says Lagorio. “I am energized, and I hope to see a woman on the ticket. I do think we will see a change as women step up.”