“We have to stop asking the old-boys’ club for money, they’re not giving it to us.” 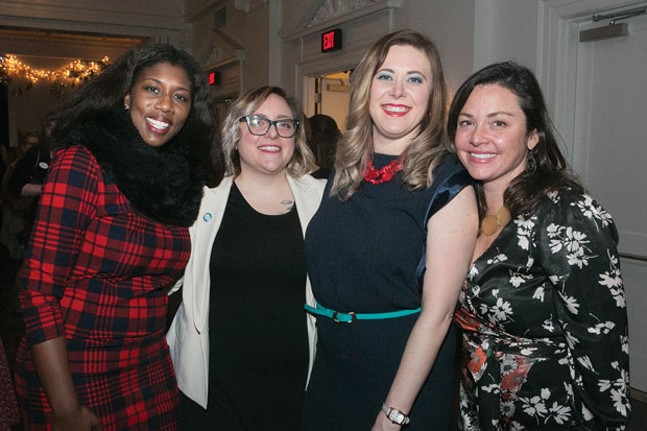 Pennsylvania has never had a female governor or U.S. Senator, despite being one of the original 13 colonies and having had ample time to elect one.

“You look at Arizona, which became a state in 1912, they’ve had four female governors,” says outgoing Pittsburgh City Councilor Natalia Rudiak. “Women are summarily rejected and shut out of the political process in Pennsylvania because of the focus on incumbency and the focus on protecting friends and golfing buddies and drinking partners.”

“We want to let them spend time talking to constituents, not dialing for dollars,” Rudiak says.

Women for the Future of Pittsburgh — whose tongue-in-cheek abbreviation is “WTF Pittsburgh” — was founded Nov. 8, a year to the day since Donald Trump was elected president.

On paper, there are a lot of good reasons to start a political-action committee to support female candidates in the Keystone State. Pennsylvania ranks 49th when it comes to gender parity for elected office. And Allegheny County has only one woman among its 28 representatives in the General Assembly: Democrat Anita Astorino Kulik, of Kennedy Township.

Then there are the intangibles of running for office in a town like Pittsburgh, dominated by an overwhelmingly male Democratic Party. “I had people who said to me, ‘You are better on our issues than anyone else, but we can’t support you,’ because there was this culture of intimidation,” Wagner says of her successful 2015 re-election race.

Wagner says all the women behind WTF Pittsburgh heard some variation of “wait your turn” when running for their respective offices. But it can be done: Wagner says that although she was outspent 8 to 1 in that 2015 race, she ultimately prevailed. “But culturally, some of these dynamics that work against women are really deeply embedded. I don’t think it’s limited just to politics,” she says.

Figures from the county’s Department of Human Services show that in 2016, some 77 percent of Pittsburgh households living in poverty were headed by single mothers. As of 2016, women in Allegheny County earned 68 cents for every dollar earned by a man. Other inequities involve race and health care. From 2008 to 2012, for instance, the infant-mortality rate for black infants in Allegheny County was nearly 14 percent, almost three times the rate for white babies, according to the Allegheny County Health Department. “These disparities go across the entire spectrum,” Wagner says.

Garrett, who in May was elected Wilkinsburg’s first black female mayor, says women of color have long known they need to do the work themselves and not count on outside help.

“Ninety-four percent of black women voted last year to save the world,” she says, referring to the women who voted for presidential candidate Hillary Clinton. “We’ve always been the ones on the front line of any social-justice movements, but we’re the least invested-in. It’s time for people to start trusting black women and investing some of these resources back into us.”

It also means building a pipeline of candidates, Rudiak says, something a large political-action committee, like EMILY’s List, which supports only candidates to national offices, doesn’t do. WTF Pittsburgh hopes to complement efforts like She Should Run, which trains women to run for public office.

Despite raising $80,000 for her primary campaign for the District 4 City Council seat and serving in Rudiak’s office for her entire tenure, Deemer lost in the spring primary to a businessman with no political experience who had the backing of party leaders and several large unions.

“As long as we have this culture of intimidation, donors worry that it could hurt their bottom line,” Deemer says. “[The PAC] isn’t going to be about who we know or who we like personally, but who is the best candidate to support women. These folks in power need to know that they don’t necessarily reflect the entire electorate.”

Since female candidates may not have access to the power networks that men do, they tend to rely on a lot of small donations. And Rudiak says research has shown that a lot of women who do give money tend to favor charities or charitable causes rather than campaign contributions.

Garrett says she wants to see WTF Pittsburgh cultivate a new set of women donors. “We have to stop asking the old-boys’ club for money, they’re not giving it to us,” Garrett says. “We have to be intentional about electing more women, and that means raising money to support them.”