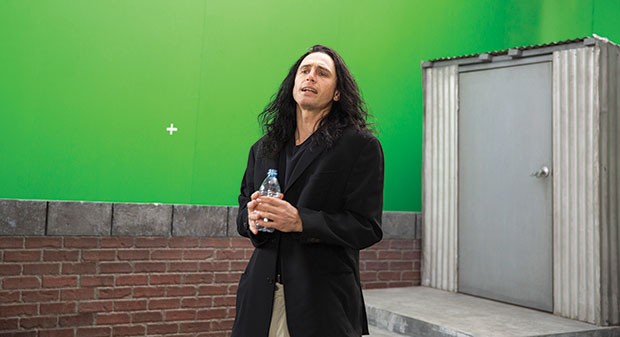 After its release in 2003, Tommy Wiseau’s film The Room, was heralded by some as “the worst film ever made.” Assigning a definitive ranking in this category would take years, but let’s just stipulate that The Room is on the list. It has since become a cult classic beloved for its awfulness; it is also that rare film in an era of home viewing that is a cult theatrical experience, playing for repeat audiences who have developed a shared experience of responding to the film’s many unintentionally funny scenes, i.e., hollering “Focus!” and throwing plastic spoons.

There’s no explaining how one poorly made film and not another shifts into this canon, but now, at least, we have the back story of The Room. The 2013 book The Disaster Artist, co-penned by one of the film’s stars, Greg Sestero, recounts the production of the laughably bad love-triangle drama, and now that book is a very enjoyable movie directed by James Franco.

Franco also stars as Wiseau, here portrayed as man of many intriguing contradictions: He is sensitive yet obtuse, guileless and mysterious, devoted to his art yet utterly terrible at it. Wiseau is an oddball, but his force of personality sweeps up aspiring actor Greg Sestero (Dave Franco) and the two move to Los Angeles, where Wiseau makes his masterpiece, The Room. It stars himself, Sestero and an assortment of untalented performers gamely delivering Wiseau’s dead-on-arrival dialogue.

The Disaster Artist is a … bio-comedy or a docu-com, I guess. It recreates history, but it is often quite funny. Wiseau is a figure of some amusement, but the film doesn’t mock him so much as celebrate his tenacity. Look, the dude had a vision and he saw it through; if he was deluded about what it all meant and how it would turn out, well, that’s hardly an uncommon human failing.

And guess who gets the last laugh? It’s true that audiences didn’t respond to The Room as Wiseau hoped, but they did embrace it. It’s not every bad movie that becomes a treasured hit; Wiseau gifted the world with a mishap of a movie that provides as much entertainment as a “good” one.

Even viewers who haven’t see The Room should be able to relate to this affectionate real-life shaggy-dog tale about dreamers, set in the shadow of Hollywood. Room fans will thrill to the inside jokes, and everybody will dig the impressive list of actors who turn up in cameo roles. And be sure to stay for the credits. They play out, side-by-side, scenes from the 2003 movie and recreations by Franco, Franco and crew, and at the very end, there is a bonus scene with Mr. Wiseau himself.