The Humans at Pittsburgh Public Theater 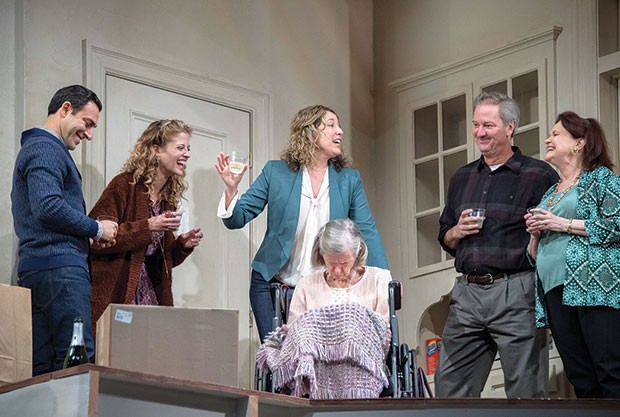 Photo courtesy of Michael Henninger
The cast of The Humans, at Pittsburgh Public Theater

When Stephen Karam’s The Humans opened off-Broadway in 2015, the praise was strong enough to occasion a Broadway transfer, and garner both a Pulitzer-finalist nod and a Tony for Best Play. The local premiere, at Pittsburgh Public Theater, gives us an opportunity to enjoy this comedy/drama’s lots o’ yuks, personal turmoil, family secrets and finale, which … well, we’ll get to that.

Brigid Blake and her boyfriend, Richard, have just moved from Queens to a (in New York terms) spacious apartment in Chinatown and are hosting their first Thanksgiving. Her family — Mom and Dad, a grandmother in the advanced stages of dementia, and a sister — drive in from Scranton, Pa., for the feast. The Blakes, it should be said, may hail from Scranton, but these old-school, working-class Irish Catholics will be immediately familiar to anyone who has, let’s say, spent any time in Pittsburgh.

To that end, the whole enterprise plays out like any family dinner probably most anyone reading this has attended. Karam (who did actually grow up in Scranton) deftly captures these characters and their troubles with the lightest touch: the bickering sort of love shared by the mother and father, the daughters struggling to hold onto their own identities against the onslaught of heavy emotional traditions, and the curious way people who care so deeply for each other often know exactly where to throw the darts.

All in all, The Humans is a rock-solid “dysfunctional family” script — a sort of contemporary-theater staple — and Karam can be proud of what he’s crafted. True, all the buzz seems a little overblown: We’ve seen a number of variations on this theme. But heaven knows there are considerably less skillfully wrought plays to have won a Tony or a Pulitzer.

But then, just as you’re gathering your wrap and feeling for your car keys, it all goes kaflooey, with Karam thuddingly exploding the final three minutes of his play with an ending that’s insane. I won’t bother with a spoiler alert because I had no idea what the hell happened and, consequently, couldn’t explain it on a bet. All I can say is that it has nothing to do, in terms of style or plot, with anything that’s come before it. It’s like Nora opening the door at the end of A Doll’s House only to have Curley from Oklahoma! stroll in singing “Oh What a Beautiful Mornin’.” The stunning naturalism which has been Karam’s strongest point vanishes and is replaced with … what? Symbol? Metaphor? Allegory? You tell me.