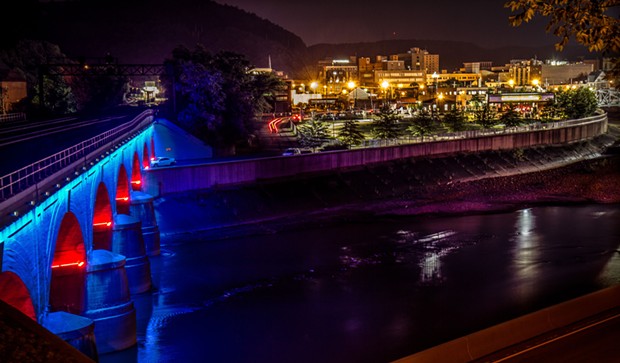 Photo courtesy of Phil Balko
View of Downtown Johnstown from across the Stone Bridge.
On Nov. 8, Politico published a story many in the Pittsburgh region have seen too many times. Reporter Michael Kruse traveled to Johnstown, in Cambria County, to talk to the same people he interviewed for a  story published prior to Donald Trump being elected president. The reporting investigated whether Trump voters had soured on the president, and Kruse sought their input on the ongoing political and cultural wars nationwide. Like many dispatches from the Rust Belt by national publications, the story painted Johnstown as a no-hope town, overrun by drugs and blight, and still in love with Trump.

Since its publication, the Politico story has spread widely on social media, thanks to the explosive final quote in which a white, elderly Trump voter says NFL players are “Niggers for life.”

But progressives in Johnstown aren’t happy. Indivisible Johnstown, a progressive group that has held candidate forums for 2018 Democratic congressional candidates, responded on Facebook: “We are OUTRAGED that this POLITICO reporter and EVERY reporter who comes to Johnstown, Pennsylvania, is only looking to tell a story of American Carnage. … Many, many citizens here are not misogynistic, racists like the Neanderthals in this article. They are working hard to make a difference.”

Mary Lou Davis, of Indivisible Johnstown, says stories like these are stereotyping Johnstown negatively. “There is such a media slant, and I am getting tired that Johnstown is getting portrayed that way,” says Davis. She says Johnstown isn't only filled with racists and cynical residents. Davis notes that the night before the Politico article was published, Johnstown elected two African-American council members, both of whom are Democrats.

Davis says while Johnstown does have many problems typical of declining Rust Belt towns, it also has a lot to offer, like the well-established tourism and history organization, Johnstown Area Heritage Association. JAHA runs the popular Johnstown Flood Museum, a children's museum and an outdoor music venue.

“We have a symphony, we have an art community, we host a national triple-A baseball tournament every year,” says Davis. “They painted with such a broad brush. The Politico piece just made us very very angry.”

Johnstown has also already started plans to redevelop its riverfront, and hundreds of residents are letting go of the idea that heavy industry will return and save the town. Johnstown'sTribune-Democrat reported in September 2016 that more than 200 people attended a meeting to develop a vision to redevelop areas along the city's riverbanks, so they "become a central asset for recreation, economic development, art and culture, and environmental restoration."

Photo courtesy of Johnstown Area Heritage Association
Many parts of Johnstown are pleasant, like Central Park (seen here), but Politco only focused on blight.
But on paper, Johnstown fits perfectly into the “Trumptown” narrative frequently spread by out-of-town media. Cambria County’s biggest city is poor (its median household income is about $24,000), it’s mostly white, and the town has been experiencing population decline since the 1930s. However, according to online voting-record data, Johnstown marginally supported Hillary Clinton by 1 percentage point.

Regardless, there are many Trump supporters in Johnstown and the surrounding area who are low-income, elderly whites who have seen their towns slowly decline thanks to factories closing. Pennsylvania polls show Trump is still widely popular in Southwestern Pennsylvania (outside of Allegheny County). But Trump’s support is not just in old, declining Rust Belt towns; in 2016, Trump had plenty of backers in wealthy suburbs.

Take Adams Township in southern Butler County. The township is about a 30-minute drive from Downtown Pittsburgh, along the well-traveled interstate I-279. While Adams, like Cambria County, is overwhelmingly white, it’s just a few-minutes drive on newly paved roads to country clubs and big-box stores in  the even-more affluent Cranberry (which backed Trump). The casual-chic Hines Ward’s Tavern 86 restaurant is less than half a mile from Adams' border. Adams' median household income is $65,000, well above the Pennsylvania average, and Adams is one of the fastest-growing towns in the Pittsburgh region.

But Adams also voted for Trump, and by a bigger margin than Cambria County. The town backed Trump by a 39 point margin over Clinton (68 percent voted for Trump, 29 percent for Clinton). So why don't national publications travel to wealthy suburbs like Adams to write stories about Trump supporters? Electorally, they provide similar support.

And while Pittsburgh’s suburbs have recently showed signs of becoming more liberal, and rural areas may be getting more conservative, it’s still upsetting to Davis that only places like Johnstown are considered "Trump Country". She said that Johnstown's wealthier suburbs, like Pittsburgh’s, should get more media focus.

“When you look at our wealthier suburbs, they overwhelmingly went for Trump,” says Davis. “And they are making Trump.”