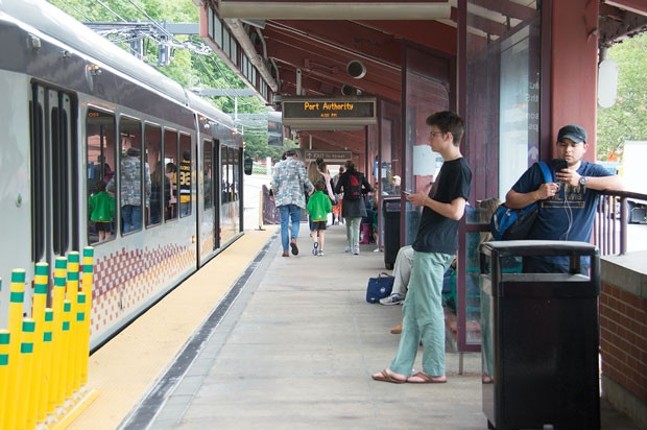 CP photo by Jordan Miller
Station Square light-rail stop in South Side
Most public-transit riders agree that using a light-rail car is more enjoyable than taking the bus. But for years, buses in Port Authority of Allegheny County’s system have had an upper hand: They could be tracked with the authority’s TrueTime app. Users can follow the bus’ progress in real time on a map or a text-version on their smart phones.

But now, that same technology, through Port Authority’s TrueTime tracker, is being applied to the light-rail lines. The lines, commonly referred to as the “T," run from the North Side through Downtown and into the South Hills. Both red and blue lines will be tracked with the real-time technology.

"I’m delighted to see another step forward being taken in enhancing the customer experience, and improving reliability and predictability for those who use our transit service,” said Allegheny County Executive Rich Fitzgerald in a press release.

The service is available immediately on the TrueTime tracker on Port Authority's website, and will be available in the near future on third-party apps like Transit, according to Port Authority spokesperson Adam Brandolph. Port Authority notes that the riders send about 4 million requests a day to track buses.

Rail is the obvious next step. “This has been one of the most anticipated items from rail riders for several years,” said Port Authority interim CEO David Donahoe in a press release. “Real-time information reduces the time riders spend waiting for public transit and allows them to make better, more informed decisions about their transit experience.”

Earlier this year, Port Authority installed iPad-like screens at select bus stops to inform riders of the time their bus will arrive. Brandolph says the authority plans to install medium-sized television monitors at select T stations within the next few months to inform riders the time of arrival of the next rail car.

To track rail cars, users just need to check that "Light Rail" or "All" is checked under the "Select Transportation Mode" tab on the TrueTime tracker. (The tab is in the top-left corner on the text-version and the top-right corner on the map-version.)

To find out more information about the TrueTime tracker visit portauthority.org.