Initially, Bracey didn’t want to make a big deal about the video, but after discovering more about Hudak’s history targeting people with liberal viewpoints, he choose to speak more publicly about Hudak. He shared the video with his Twitter followers, and many of them reported Hudak’s account, LibtardToday, to Twitter in hopes that the account gets suspended. Bracey spoke with Pittsburgh City Paper on Oct. 26 about why he wanted to take action against Hudak and his racist video.

“At first, I wasn’t going to say anything. I figured it was just another troll looking for attention,” says Bracey. “But then in the last week, I have heard story after story, about how this guy is causing real issues, behind the scenes, with troll accounts. He has offended a lot of people.”

CP reached out to Hudak on Facebook to request an interview, but Hudak didn’t respond. His Facebook page describes Hudak as “Exposing fake comedy. The cure to the disease that is social justice.” One of his profile pictures shows Hudak wearing a shirt that reads “socialism is for fags.” The page also includes many posts with pro-Donald Trump images.

On the LibtardToday Twitter account, Hudak referenced the Ku Klux Klan and white supremacists in a post with a picture of Bracey, inclusing the caption: “Why would a black man wear a loose rope around his neck, that's basically Klan training wheels. David Duke got 1 for his grandson's 5th Bday.” 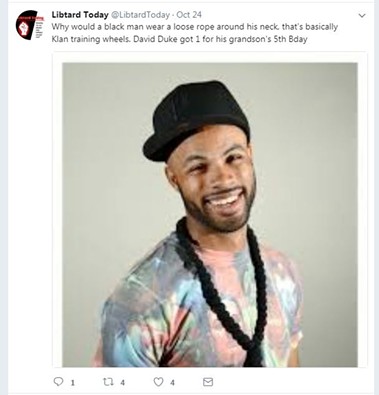 Image courtesy of Twitter
Zach Hudak insulting Day Bracey in a tweet.
CP spoke to a promoter who books acts in Indiana County, who asked to remain anonymous out of fear of online harassment from Hudak. The promoter said that Hudak has been mostly barred from comedy venues in Indiana County because he often made many offensive jokes about race and rape.

“He is a trashy comedian and had too many rape jokes,” said the promoter. “We just have to be vigilant about keeping him out of Indiana County.”

After Hudak was blackballed from Indiana County venues, the promoter said that Hudak’s Twitter account became more active and he began doxing, or identifying people without their consent, people who responded negatively to his social-media activity.

At least two other Twitter accounts associated with Hudak have been suspended by Twitter, but as of press time, the LibtardToday account hasn't been suspended, nor has a @ComicZachHudak account, which also has racist posts.

Ashley Corts, co-owner for Black Forge Coffee in Allentown, told CP that she received harassment from Hudak after the coffee shop’s punch-card story became national news. (Black Forge handed out reward cards with the faces of well-known conservative figures, like President Donald Trump and U.S. Sen. Ted Cruz, that were punched out with a purchase.) About a week after the story broke in March, Hudak wrote a blog on his Wordpress page condemning Black Forge and saying the move was bad comedy and offensive.

Corts said she believes Hudak was prank-calling the shop and was sending hate mail to the shop. Corts interacted with Hudak on social media and said that Hudak made offensive sexual references to her in the fallout of the punch-card story. Corts said that Hudak has also been harassing her business partner, Nick Miller, and his podcasting group, the Epicast Network, which hosts Bracey’s Drinking Partner’s podcast.

Corts wants to expose Hudak in hopes that others will realize his offensive material has no place in Pittsburgh. “We are absolutely disgusted,” says Corts of Hudak’s video. “People in the comedy scene in Pittsburgh shouldn’t be acting this way and getting away with this for so long. I am glad people are ousting this guy.”

Photo courtesy of Facebook
Zach Hudak
Bracey understands that Hudak was trying to offend him with his video. Bracey notes that Hudak is also seen pretend-stomping on a Washington Redskins’ cap. Bracey is half Cherokee Indian and has been critical of the NFL mascot in the past.

In the end, Bracey hopes exposing Hudak and his video will counter any narrative that the Pittsburgh region is beyond having race-relations problems.

“It was pathetic, it was sad, I knew what he was trying to do. I knew he was trying to hurt my feelings,” says Bracey. “But he put Nutella on his face ... it was pathetic. I am more upset about all the other things he has done. And I don’t want to hear that everything is perfect in Pittsburgh. I literally just got blackfaced. This only continues to exist because we don’t confront it.”

Zach Hudak, the comedian who posted a video of himself in blackface, spoke to CP in response to the story on Oct. 27. Hudak confirmed that he and the comedian he was targeting, Day Bracey, who is black, were arguing back and forth on social media. Hudak said it started with him arguing on social media with another person. Hudak claimed that when Bracey saw the argument, Bracey joined in. Hudak said that Bracey then “threatened him with assault” on Twitter, and this is why Hudak’s video had the bit about “curb stomping.”

“Threatening to commit an aggravated assault is worse than putting on ebony makeup and doing a bad impersonation,” said Hudak.

Of course, there are claims that Hudak has also violently threatened people. Pittsburgh comedian Tim Ross told CP on Twitter that Hudak has “threatened to fight/choke me out multiple times.” Hudak denied these allegations. As for why some venues in Indiana County refuse to book him, Hudak said that many people in the area have been spreading rumors and lies about him.

CP attempted to reach Hudak, before posting the story online this week, through a Facebook account sharing Hudak’s name and picture. Hudak said his account was suspended for some time because he called a friend of his a “fag” on Facebook.

In the end, Hudak doesn’t regret posting the video of him in blackface imitating Bracey. “I have zero regrets. I feel that free speech is under attack. People need to grow thicker skin,” said Hudak. “I am a comedian. That is performance art, like it or not.”

Hudak said that he wants to move on from this controversy. “I don’t want to see these people, and I just want to move on with my life and never have to deal with these people again,” he said. “I will ignore you, and you can ignore me.”