The state’s ‘stand your ground’ law has failed to make waves, but activists and experts say Pennsylvanians shouldn’t forget about it | Pittsburgh City Paper

The state’s ‘stand your ground’ law has failed to make waves, but activists and experts say Pennsylvanians shouldn’t forget about it

“These laws are important to keep your eye on because they often have effects that are counterintuitive to people.” 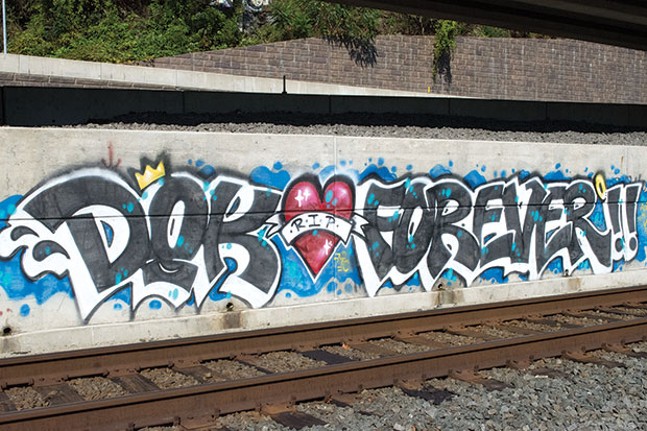 This past February, 28-year-old Donald Ketter was shot and killed outside of a bar in Carrick. The shooter, Derek Vasos, had called for a ride through the ride-hailing service Uber and was sitting in the passenger seat when Ketter allegedly approached the vehicle. According to court documents, Ketter approached Vasos with a belt in his hand, and Vasos shot Ketter before telling the Uber driver to drive away.

Vasos has since been charged with criminal homicide, and in the trial set to begin next week, his defense attorney Phil Dilucente tells City Paper, he will argue that Vasos acted in self defense as permitted under Pennsylvania’s Castle Doctrine law. Updated in 2011, the law extends the right to self-defense, including the use of deadly force, in a victim’s home, vehicle, or any other house or vehicle that the victim legally occupies.

“Under the Pennsylvania law, a person in any lawful place has no duty to retreat and has the right to stand their ground if they feel it is necessary to defend themselves against bodily harm or death,” Dilucente says.

So-called “stand your ground” laws were thrust into the national spotlight after the 2012 death of 17-year-old Trayvon Martin. During the trial against Martin’s killer, George Zimmerman, the jury who acquitted Zimmerman was instructed that under Florida law, he “had no duty to retreat and had the right to stand his ground and meet force with force.”

Pennsylvania’s “stand your ground” differs from Florida’s. Experts say it is more restrictive. And perhaps as a result, the state hasn’t seen as many high-profile incidents as Florida, and scrutiny of our law has diminished.

But experts and activists say these laws shouldn’t be forgotten. Data suggests a correlation between states with stand-your-ground laws and an increase in homicides. And the Pennsylvania House is considering legislation that would expand the state’s stand-your-ground law even further.

“These laws are important to keep your eye on because they often have effects that are counterintuitive to people,” says David Harris, a law professor at the University of Pittsburgh. “In Pennsylvania, in the current climate, it’s likely that you will have organizations try to expand this set of legal protections.”

Pennsylvania’s Castle Doctrine was signed into law in 2011. The legislation was originally vetoed by Gov. Ed Rendell and underwent several changes before it was approved by the state legislature.

“At the time we thought it was a solution in search of a problem,” says Richard Long, executive director of the Pennsylvania District Attorney’s Association, which worked with the legislature to revise the law. “We weren’t seeing people who were legitimately exercising self-defense being prosecuted in the first place.

“We did work to get it as palatable as possible, make some improvements to it that were included in the final legislation.”

Since then, Long says, he hasn’t seen many issues arising from the state law. And he says that’s because of restrictions that were added to the law. In Pennsylvania, the law mandates that those using the defense cannot be engaged in criminal activity and must believe their opponent has a deadly weapon.

“Since it was enacted, we haven’t had a lot of reports that there have been problems with it or that it’s impaired justice in anyway,” Long says. “There have been numerous cases where stand-your-ground law has applied and cases have proceeded. What we have in Pennsylvania has additional protections in it than [does] the law in Florida and many of the other jurisdictions. We feel that as far as these laws go, Pennsylvania’s is kind of the gold standard out there.”

Among the parts of Pennsylvania’s legislation that were removed during negotiations in 2011 was a provision for disparity in size or number of the involved parties. In the state House, Rep. Rick Saccone (R-Allegheny) has proposed legislation that would change that.

“In cases where an individual or group of assailants place another individual in a life-threatening situation without being in possession of lethal weapons, we must enable these people to take the proper actions in order to prevent themselves from becoming victims,” Saccone said in a statement. “This legislation will provide Castle Doctrine protections to allow the use of lethal force in cases where an individual possesses the physical power, stature, or ability to inflict serious harm or death upon another person or in a case where the individuals using the force outnumber the victim such as he or she may fear serious bodily harm of death.

“It is easy to recognize that the size and number of attackers are critical variables in inflicting serious bodily injury. The disparity of force from group and gang attacks on citizens using only kicking and punching can be just as lethal as attacks with weapons especially to the elderly.”

Saccone’s legislation, HB167, provides a defense for shooters who feel that there is a “disparity in size” between them and their opponent, or those who are outnumbered, even if their opponent or opponents don’t have a weapon. So far 30 co-sponsors have signed onto the bill.

“Although this doesn’t have much traction at the moment, this is something citizens in Pennsylvania should be aware of,” says Rob Conroy, organizing director of CeaseFirePa, a group focused on reducing gun violence. “Obviously this is one of the scariest things you can imagine as a citizen of Pennsylvania, is for this to pass.”

“Say you have a 120-pound young man or woman and you have a 300-pound Pittsburgh Steeler coming after him. Obviously that lethal size is a threat in and of itself,” Stolfer says. “You have gang members who attack people. Should you have to wait until you’re on the ground and dying before you can respond? In Pennsylvania you do, and I don’t feel a soccer mom or a person of smaller stature should be inhibited from using lethal force if they feel they’re in danger of bodily harm or death.”

“In the past 20 years, there has been a drop of nearly 50 percent in violent crime, part of that is the expansion of the right of citizens to protect themselves, using concealed-carry firearms and Castle Doctrine laws, despite the rhetoric we hear from some parts of our nation and protesting organizations, the facts are clear from academics that this does work.”

While it’s true that violent crime fell by half nationally between 1991 and 2013, according to federal statistics, other researchers have detected a negative correlation between stand-your-ground laws and crime. In 2015, the National Taskforce on Stand Your Ground Laws, convened by the American Bar Association, released a report that noted an increase in homicides in stand-your-ground states.

“What we found from the research of others, is that states that passed these laws with the promise that this was going to hold down crime, especially violent crime, and particularly homicide, was that homicide actually went up,” says Pitt professor Harris, who served on the task force. “So  it does not stem the flow of homicides.”

In an interview with CP, Harris expressed wariness about disparity-of-size legislation being considered in the House. He said a person’s size shouldn’t determine how dangerous they are, and said the amendment could lead to racial disparities.

“Another reaction I have to it is, we know that when we look at perceptions of African Americans by others, African-American males are often perceived as larger and more threatening than they actually are, given the same physical parameters as a white person,” Harris says. “This would appear to feed in to those very misperceptions, in moments of low information. This is going to cause real problems.”

Harris says the public should regard the available research when considering the passage of the proposed legislation and others like it.

“We should be very careful about accepting arguments that sound attractive without looking at the empirical evidence,” Harris says. “People who say this will control crime, law-abiding people can use this, we have to be aware about what the evidence actually is. You can’t let people get away with statements like that. You have to check the research and it’s out there.”