“It’s cheaper if you can find a deal, and you definitely have more freedom.” 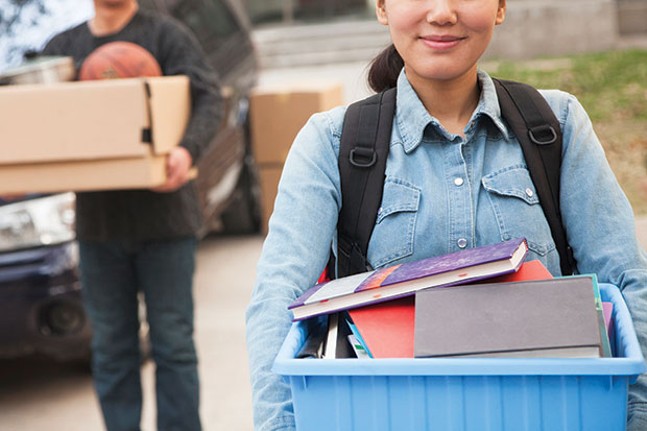 Moving away from home for the first time can be an overwhelming experience for many college students. During freshmen year, many consider living on campus; some are required to do so by the university. But your first residential environment will likely influence where you decide to live for the rest of your college experience.

Take Jonathon Wishnow. Now a University of Pittsburgh senior, Wishnow lived in Litchfield Tower B during his freshmen year. But due to his experience there, he was eager to find his own place afterward.

“My roommate was a self-proclaimed anarchist who showered about once a week. We ended up having cockroaches because of his side of the room,” Wishnow says.

Students must weigh all residential options in and around a college campus to determine what will work best for them. Will it be the dorms, on-campus apartments or a house off-campus?

Wishnow moved into Bouquet Gardens his sophomore year. Though still a part of campus, Wishnow found more freedom and comfort in the four-bedroom house with a kitchen that rented for $4,800 a semester.

“I found the meal plan on campus kind of restrictive. Many of the restaurants are owned and operated by the campus, so they have the ability to mark up prices,” Wishnow says. “Having a kitchen can really help cut costs.”

Wishnow is not alone in his desire to be able to cook his own meals. Faith Thaler, a Pitt senior, lived on campus her first two years, but eventually made the move away as well.

“It’s cheaper if you can find a deal, and you definitely have more freedom,” Thaler says. “Grocery shopping and cooking can really help you save money.”

The cost of campus housing for freshmen at Pitt, Duquesne University, Point Park University and Carnegie Mellon University varies. Per-semester rates for standard dorms range from $2,610 at Point Park to $4,030 for the most affordable option at CMU.

Though this price may seem cheaper than renting off campus, students must consider the cost of meal plans that can easily add more than $1,000 in expenses per semester.

Garrett Mateljan, a Duquesne junior, recognized the benefits of living on campus during his time as a freshman at St. Martin’s residence hall.

“There are definitely pros of living on campus: You’re close to classes, there is easy access to food with meal swipes or flex [plans], and it’s easy to stay involved on campus,” Mateljan says. “Now I live in the South Side because it’s cheaper and I have more responsibility. It helps with life lessons like money management.”

Wishnow, who currently lives in a two-bedroom house on the South Side Slopes for $350 a month on a subletting agreement, says that because of his type-A personality, off-campus living ultimately suited him best.

“It was nice as a freshman not to have as many responsibilities, but it’s so liberating to have your own house,” Wishnow says. “I was able to explore common interests on campus through clubs and mutual friends, which makes finding a good roommate a lot easier later on.”

And Pitt’s Thaler says less can be more when it comes to choosing a place and people to share it with. She currently lives in a two-bedroom house in South Oakland for $550 a month plus utilities.

“Living with a lot of other people can be difficult — sharing a small bathroom or one fridge,” Thaler says. “If you can find something affordable for two or three people, it is definitely worth checking out.”