The quick-paced Liar is verbal fencing 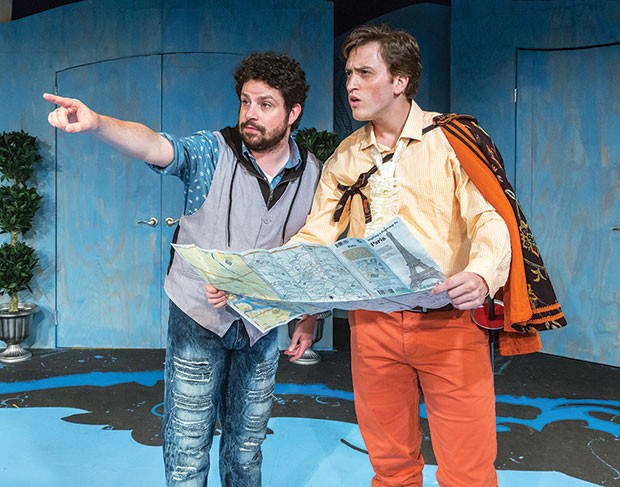 In a world of rampant stupidity, let us welcome the engagingly clever as both pleasure and antidote. Kinetic Theatre Co.’s ambitious Classics: Re-Mastered series continues its success with the too-timely title of The Liar. (Bring anyone to mind?)

David Ives has updated his 2010 version of Pierre Corneille’s 1644 Le Menteur (“The Liar”), which Corneille himself largely swiped from Juan Ruíz de Alarcón’s 1634 La Verdad Sospechosa (“The Suspicious Truth,” a.k.a. “The Truth Can’t Be Trusted”). With such a fine pedigree spanning centuries and nations, so much nonsense and fun can be packed into a two-act comedy that is only very slightly topical. True love trumps all.

More important than the plot (such as it is) is the wordplay. Yes, there’s alliteration, onomatopoeia, innuendo and the disdained yet ever-versatile pun. Ah, but Ives takes on a task worthy of a Herculean Apollo: verse. Specifically pentameter, which Ives rhymes with diameter. The rhythm throbs with incessant, sometimes unlikely rhymes.

Directed by Andrew S. Paul, Kinetic’s producing artistic director, Liar is as gleefully physical as it is lexical, casually anachronistic, and entirely charming. In a candy version of Paris, pairs of young lovers meet and part through a bright fog of confusion. Much of the latter is due to the eponymous antihero, Dorante, who would never speak the truth if a lie would save embarrassment, enhance his reputation, or just be good sport. He trips in his own web often, not fully learning his lesson by the happy ending.

Ethan Saks unflaggingly embodies the unflappable fabricator. There are many gems, but most sparkly is the “duel” between Dorante and his beefy but dim friend Alcippe (Charles Francis Murphy, as quick on his feet as to anger). Thank you, Michael Petyak, fight choreographer.

The cast sparkles, too: Erika Strasburg and Sarah Silk as the non-interchangeable ladies of Dorante’s intentions; Sam Tsoutsouvas as his much-sinned-against father, still able to roar; Patrick Halley, narrator and counterpoint to (and servant of) Dorante; Julianne Avolio as most memorable twins; and John Michnya as the valiant if undervalued Philiste. And a nod to Kim Brown’s luscious costumes and Gianni Downs’ streamlined set.

The quick-paced Liar is verbal fencing, scoring one touché after another. And a delicious confection: extra sprinkles and whipped cream on a multi-scoop sundae. With nuts, of course.